Hearts signed Barrie McKay, the former Rangers player, from Swansea City at the start of the season. The 27-year-old was ever-present in Hearts’ attack and helped his side to achieve third place in the Scottish Premiership table, behind Celtic and Rangers. He was the highest assist provider for Hearts and made 12 goal-scoring contributions throughout the season. The player was a bargain, as Hearts acquired his services on a free transfer.

McKay made 33 appearances in the league this season, scoring two goals. The Scotsman provided ten assists and was the joint second-highest assist provider in the league. McKay showed a lot of discipline on the pitch and didn’t receive a booking throughout the season. 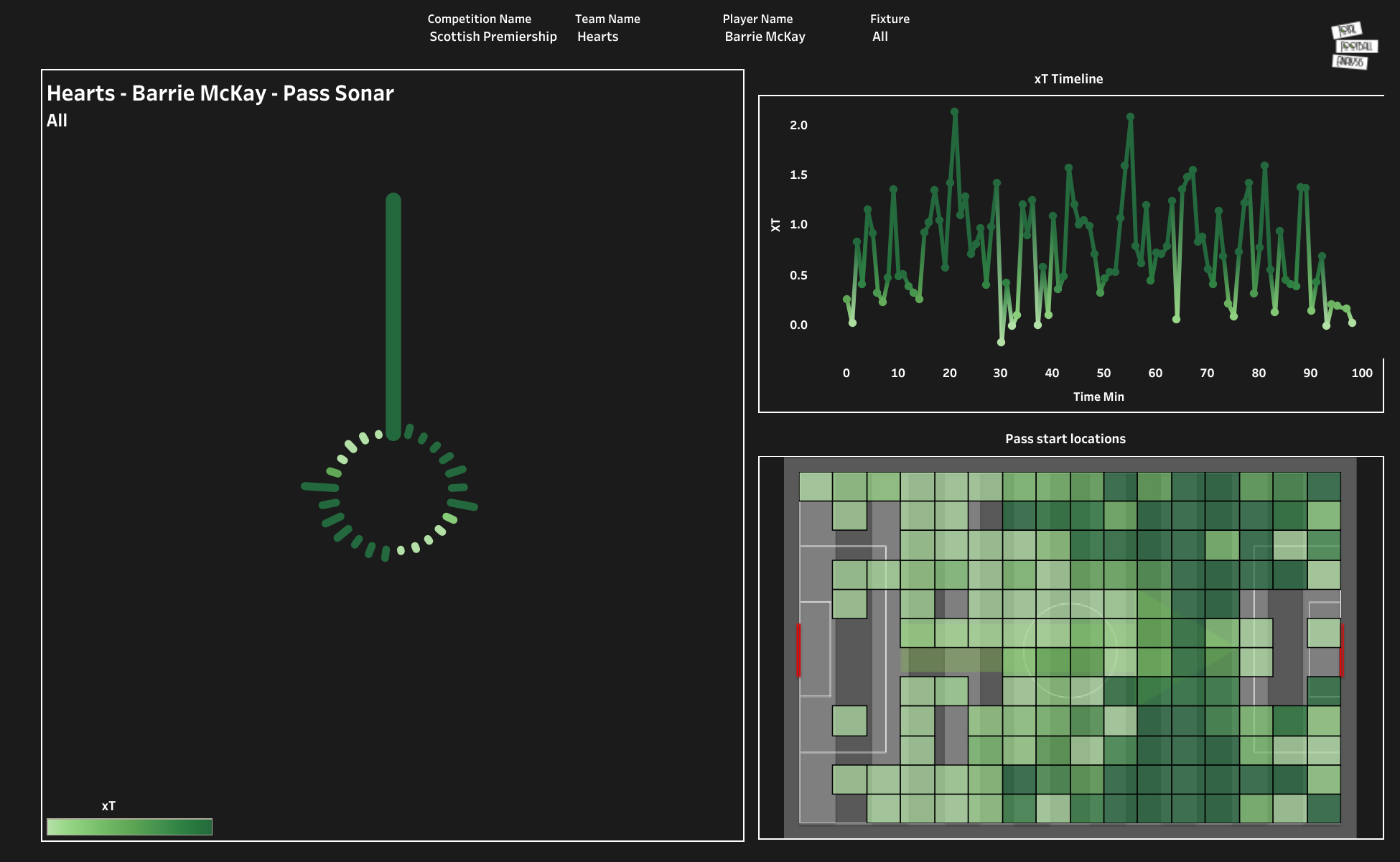 The above viz shows the pass starting location and the threat created at different intervals from passes. By looking at the pass start location, we can observe that the player was very flexible with his positioning on the pitch. He featured on the left, centre and right sides. The player has taken very wide positions on the field and has also tried to penetrate the opposition’s penalty box. He had 66 touches inside the opposition’s penalty box throughout the season. He shared most of the passes with Alex Cochrane. McKay attempted 70 passes towards striker Liam Boyce, and those passes created the highest threats for him. 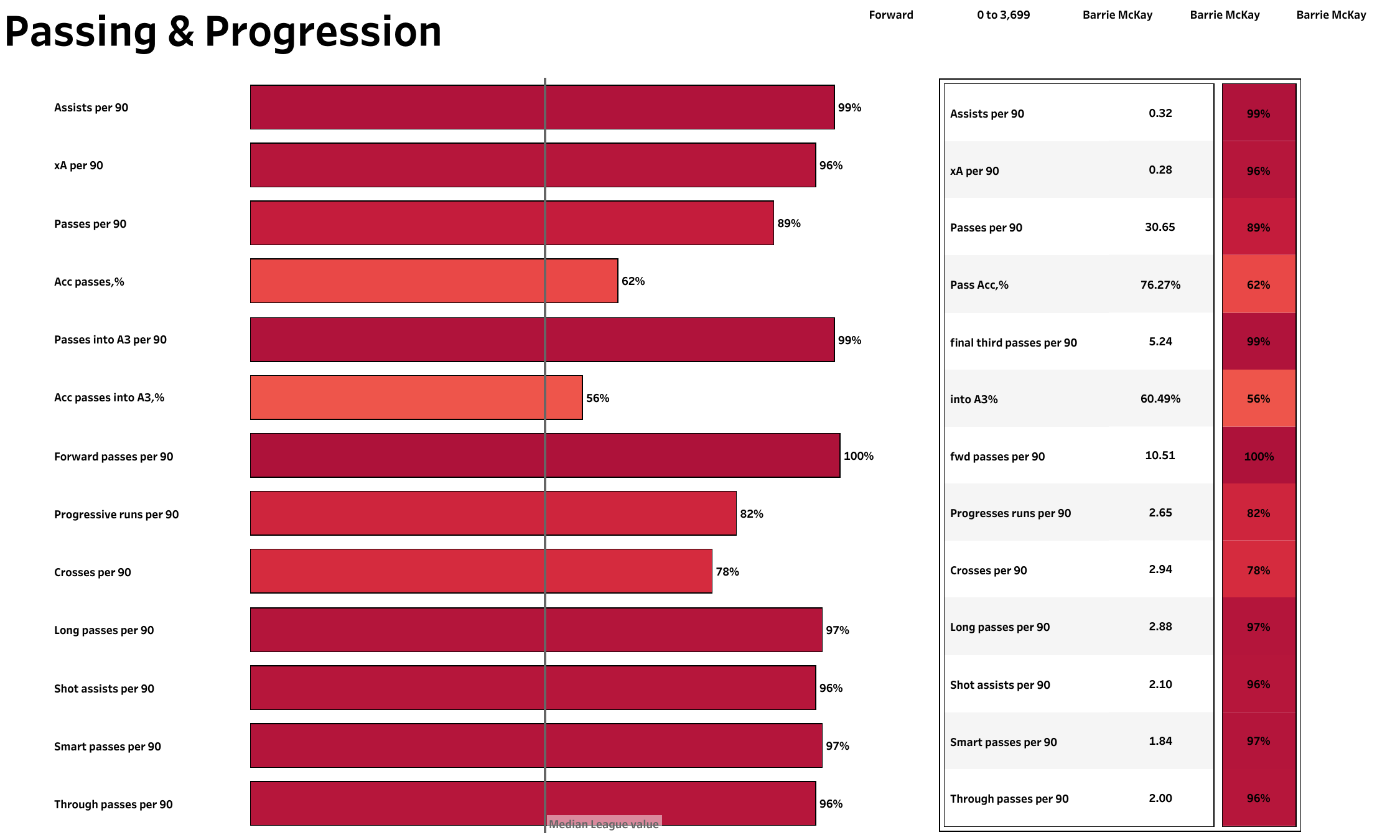 McKay impressed everyone with his passing on the pitch. When looking at the above chart, the general rule is that the longer the bar, the better the performance – you can see the league average in the middle, and the % is the percentile rank the player is in. McKay had a very high percentile rank when compared to other forwards in the league. He averaged 30.6 passes per 90 minutes, with a 76% accuracy rate. The 27-year-old attempted the highest number of forward passes amongst other forward players in the league. He also had a very high percentile rank for attempting smart passes and through passes. 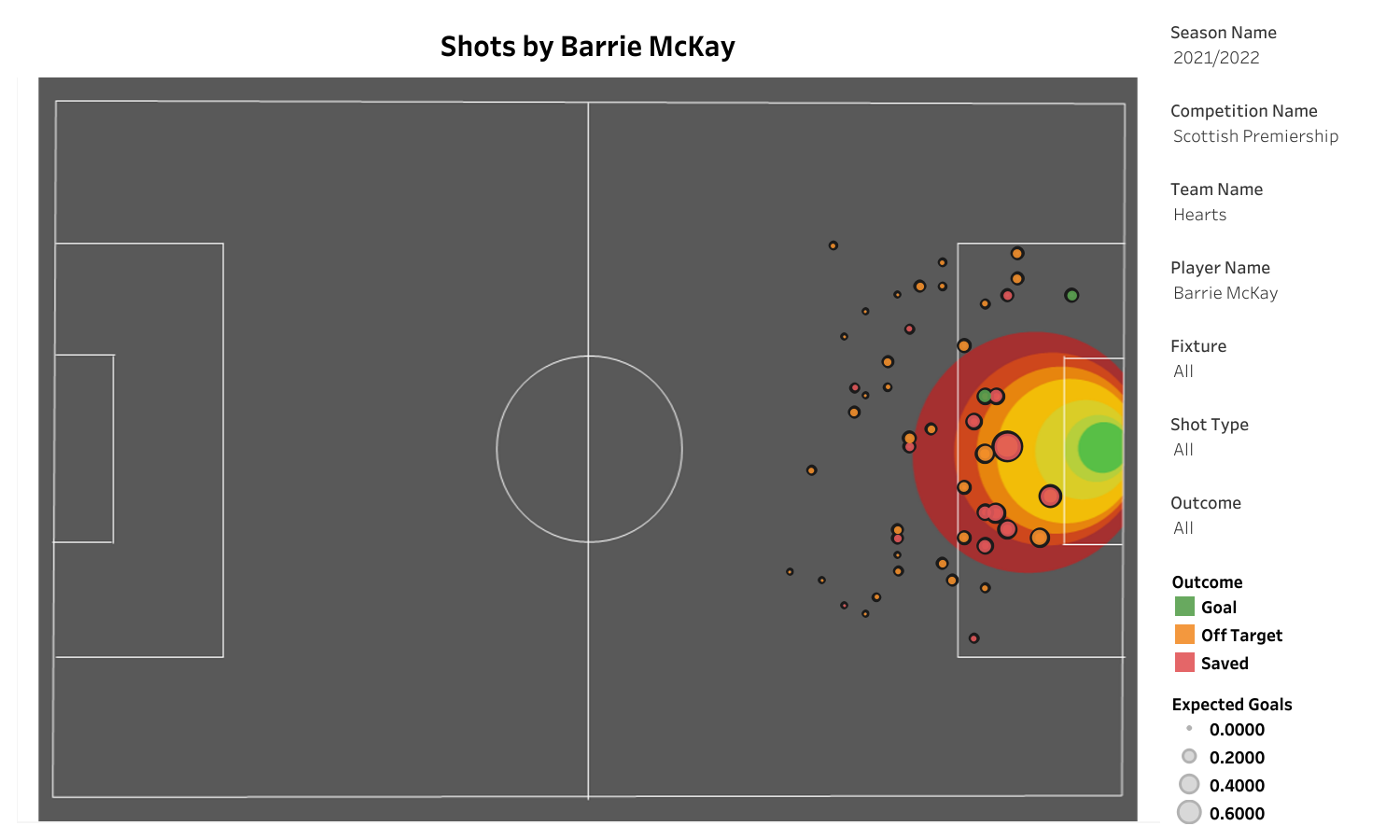 The forward also had some chances for himself on the pitch and attempted a few shots. McKay attempted 50 shots in the season and managed to hit the target 17 times. Both goals were scored from the left side. Most of the shots on target were attempted from right in front of the goal. The shots attempted from wider areas were mostly off-target.

Barrie McKay was one of the best signings of the season as he helped his side to finish in third place by providing the highest number of assists. The player failed to score more goals but has shown signs that he could better his tally from this season. Hearts will be looking for another impressive season from the forward and finish further up in the league table.