Celtic have signed the 24-year-old Japanese striker, Daizen Maeda, on a permanent deal from Yokohama Marinos. The player joined the Scottish Premiership champions on loan in January. He became a crucial part of the Celtic squad and made some essential contributions that helped his side comfortably earn the league title. Maeda has already played under Ange Postecoglou at Yokohama. The manager was happy with Maeda’s performance and decided to sign him permanently.

Maeda made 16 appearances, two of which came off the bench. He managed to score six goals past the opposition goalkeeper and also gave five assists to his teammates. He operated on the left side of Celtic’s attack and supported his fellow countryman, Kyogo Furuhashi in the attack. 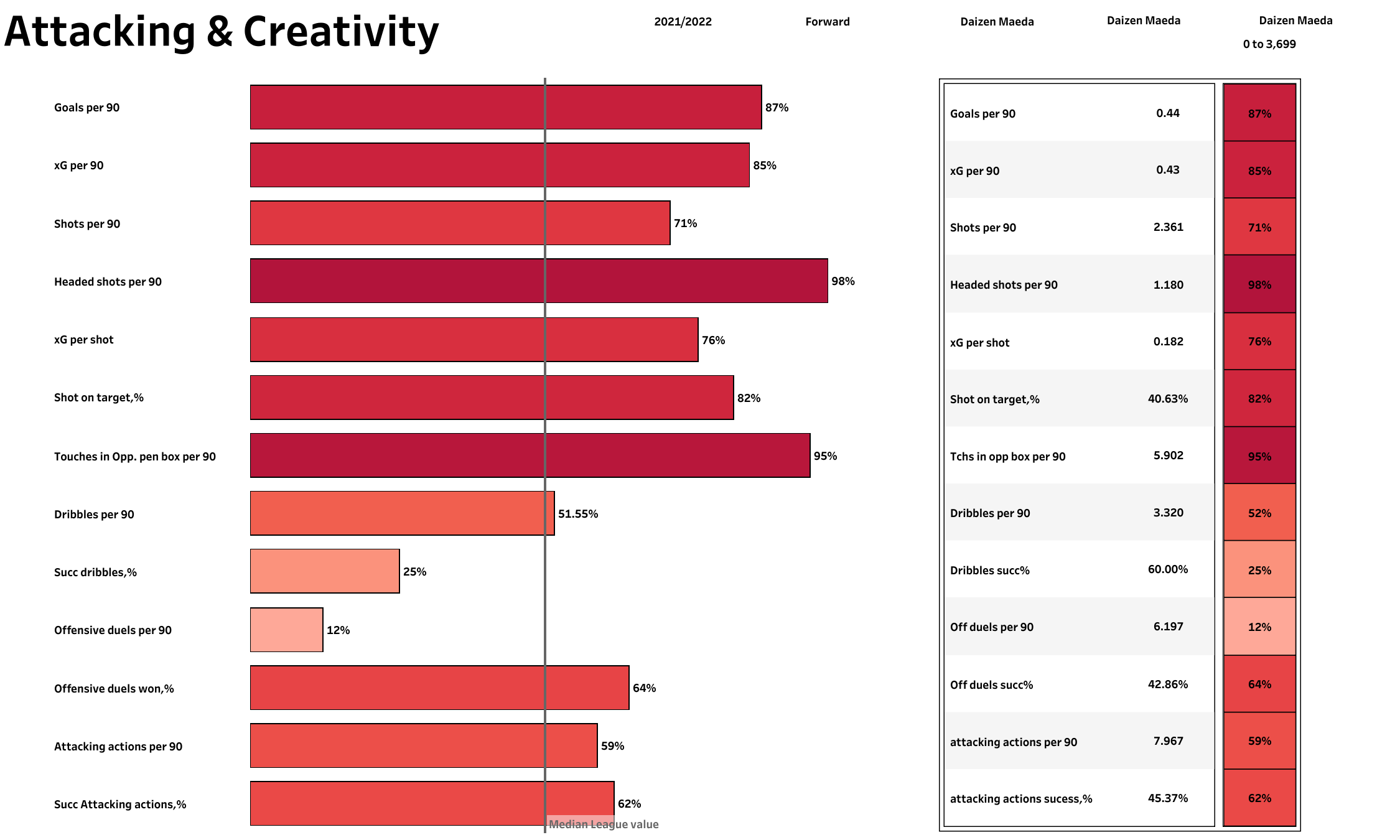 When looking at the above chart, the general rule is that the longer the bar, the better the performance — you can see the league average in the middle, and the % is the percentile rank the player is in. The above data shows Maeda’s attacking and creativity stats in comparison to other forwards in the league. It can be noticed that Maeda had a high percentile rank for scoring goals, xG per 90, shots, headed shots, and so on. He was a threat in the air, as the player averaged more than one shot from the head per 90 minutes. Maeda penetrated the opposition’s penalty box quite often and averaged around six touches per 90 minutes. He attempted a few dribbles and was involved in a few attacking options. However, the player was an attacking threat in front of the goal with the number of shots he attempted and the touches he took inside the opposition’s penalty box. 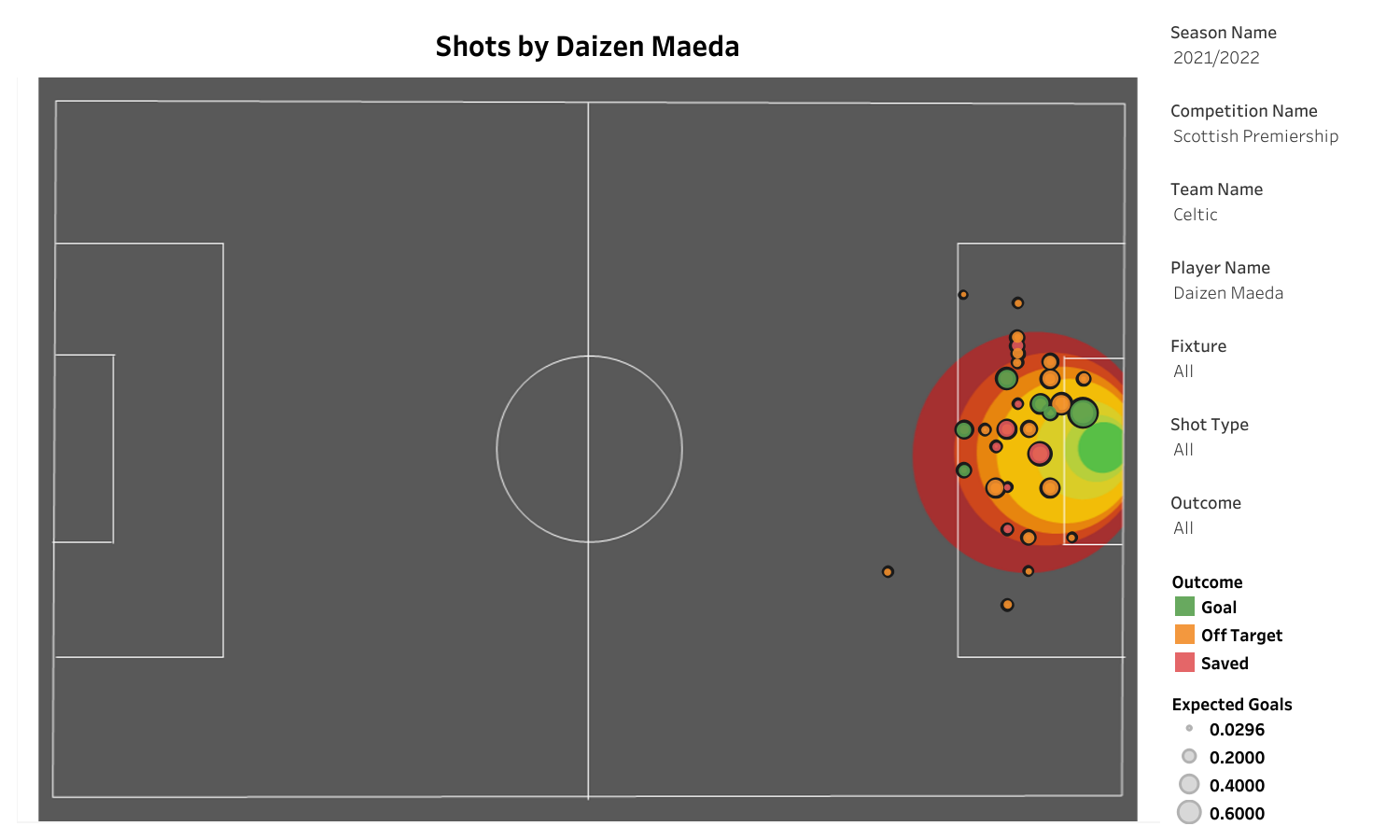 Maeda attempted 32 shots in the Scottish Premiership last season. The forward averaged more than two shots per 90 minutes and had a shot accuracy rate of 40.63%. One of the things that we can notice from the above viz is that the player attempted 31 shots from inside the opposition’s penalty box. He found spaces inside the box and converted six chances. Almost every shot was attempted from a very close range and in the front of the goal. 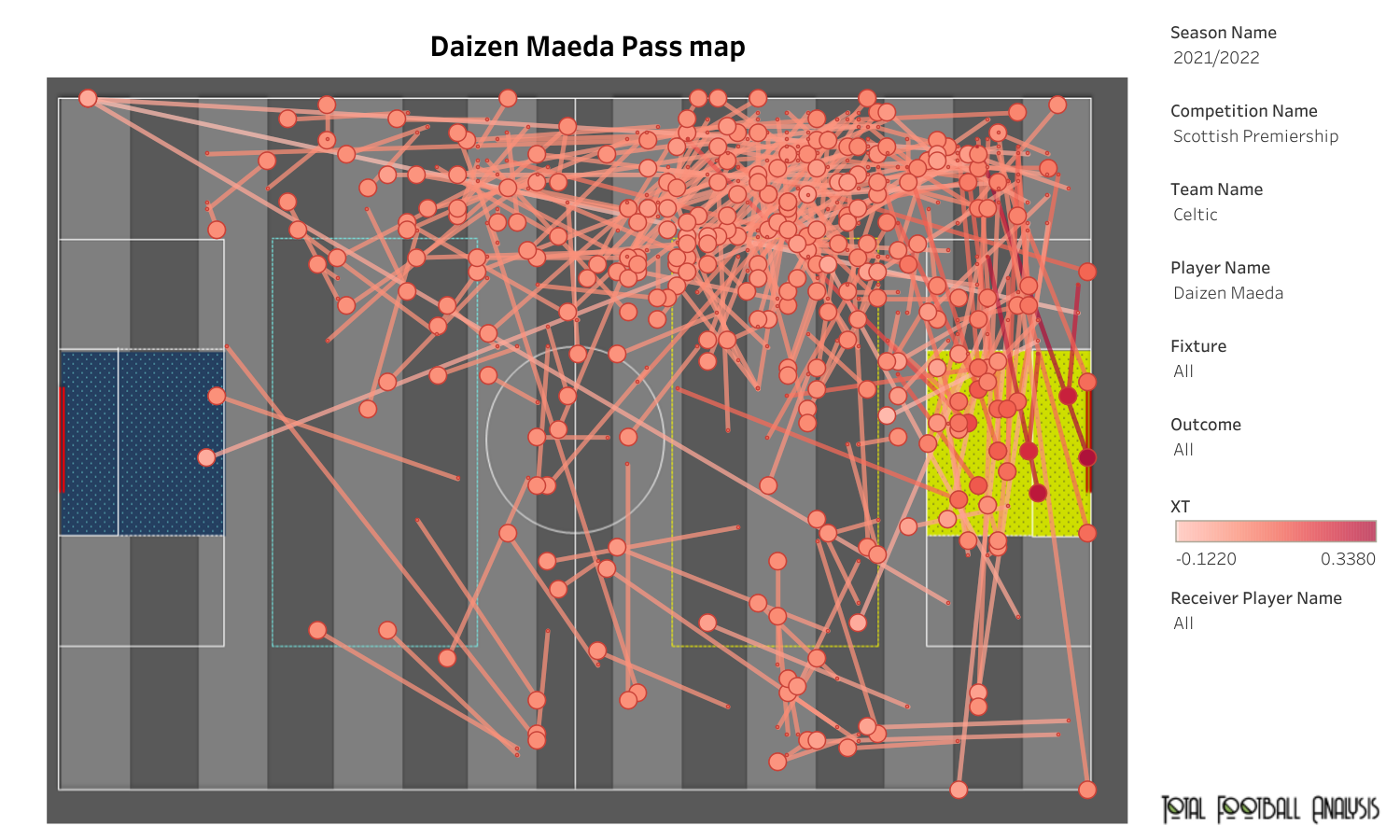 Maeda showed some skills with his passing. The forward averaged 22.13 passes per 90 minutes and had a passing accuracy rate of 77%. From the above viz, it can be noticed that the player attempted a few passes into the opposition’s penalty box. The 24-year-old averaged more than two crosses per 90 minutes. Some of the passes attempted by the player landed inside the opposition’s 6-yard box. He provided five assists, including three in one match against Motherwell.

As mentioned above, the Japanese international was a threat in the air. The above viz shows all the duels that were contested by Maeda. It can be observed that he contested a few loose ball duels and aerial duels inside the opposition’s penalty box. Most of the duels were contested in front of the goalkeeper.

In the short spell he spent at the Scottish Premiership champions, Daizen Maeda impressed everyone. He made 11 goal contributions, and that earned him a move to Celtic. The forward will now look to add more goals to his tally for the next season and help his side to retain the league title.