Dundee United signed Ian Harkes from MLS side DC United. The 27-year-old midfielder was signed in the January transfer window of the 2018/19 season when the Terrors were playing in the Scottish Championship. The following season, Dundee United earned promotion into the Scottish Premiership and the American played a crucial part in their promotion. His contract with the club ended this season, but Dundee United have kept their faith in the player and given him a one-year contract extension. The American will now be playing in his third season in the Scottish top division.

Harkes is a versatile midfielder who can play as an attacking midfielder and as a central midfielder. He also featured on the wide side in some of the matches. Last season, the 27-year-old made 28 league appearances for the Scottish club. He played his most productive season for Dundee United, where he scored three goals and provided two assists. 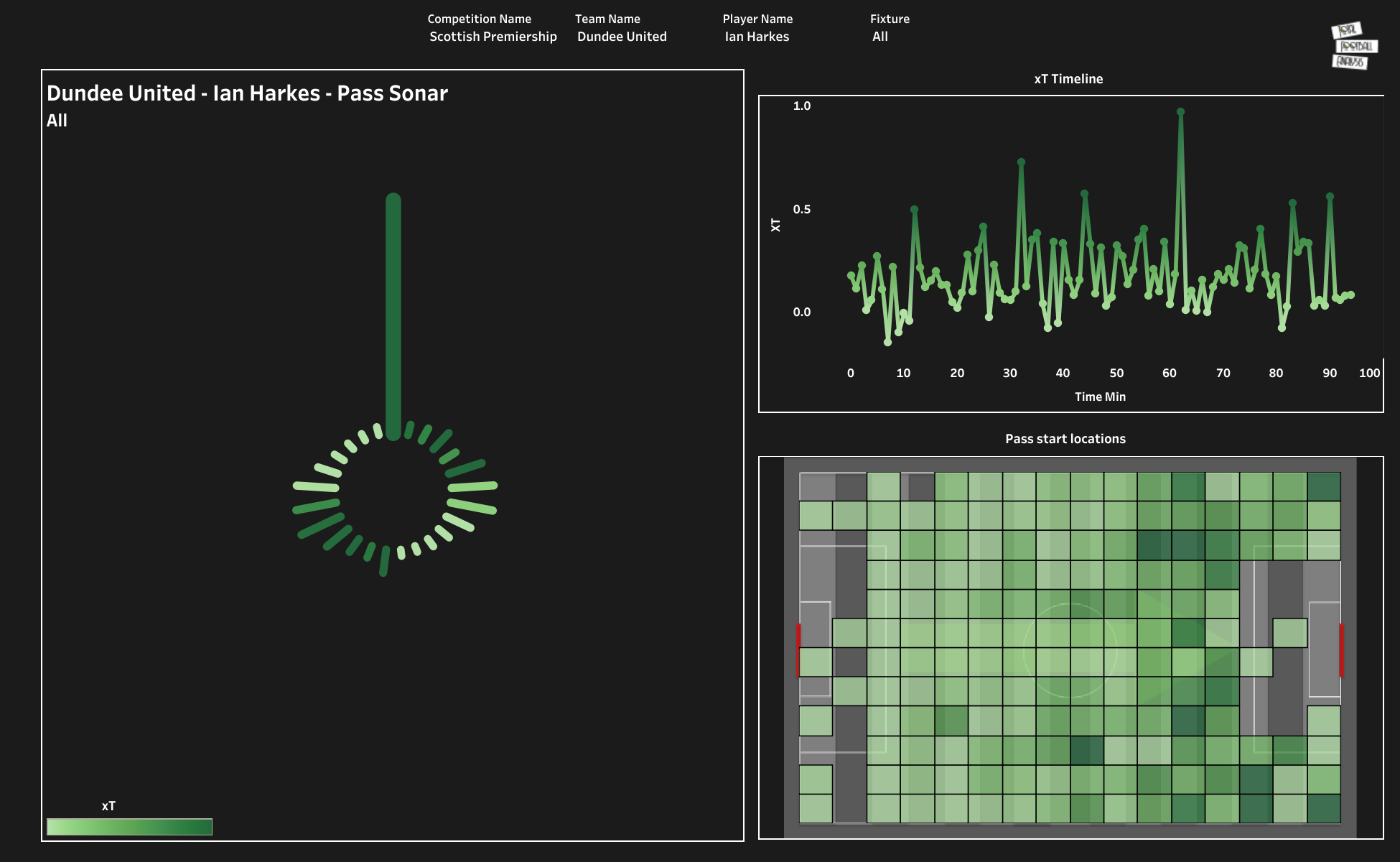 The above viz shows the pass start location and the threat created from passes at different time intervals. The midfielder averaged 35.45 passes per 90 minutes with an accuracy rate of 80.66%. By looking at the map in the above viz, we can observe that the midfielder was present everywhere on the field. He took positions on both the flanks and attempted passes into the opposition’s penalty box. His versatility was crucial for the manager as the player could easily be used anywhere in the midfield. The xT timeline shows that Harkes was effective with his passing during the middle phase of the matches. 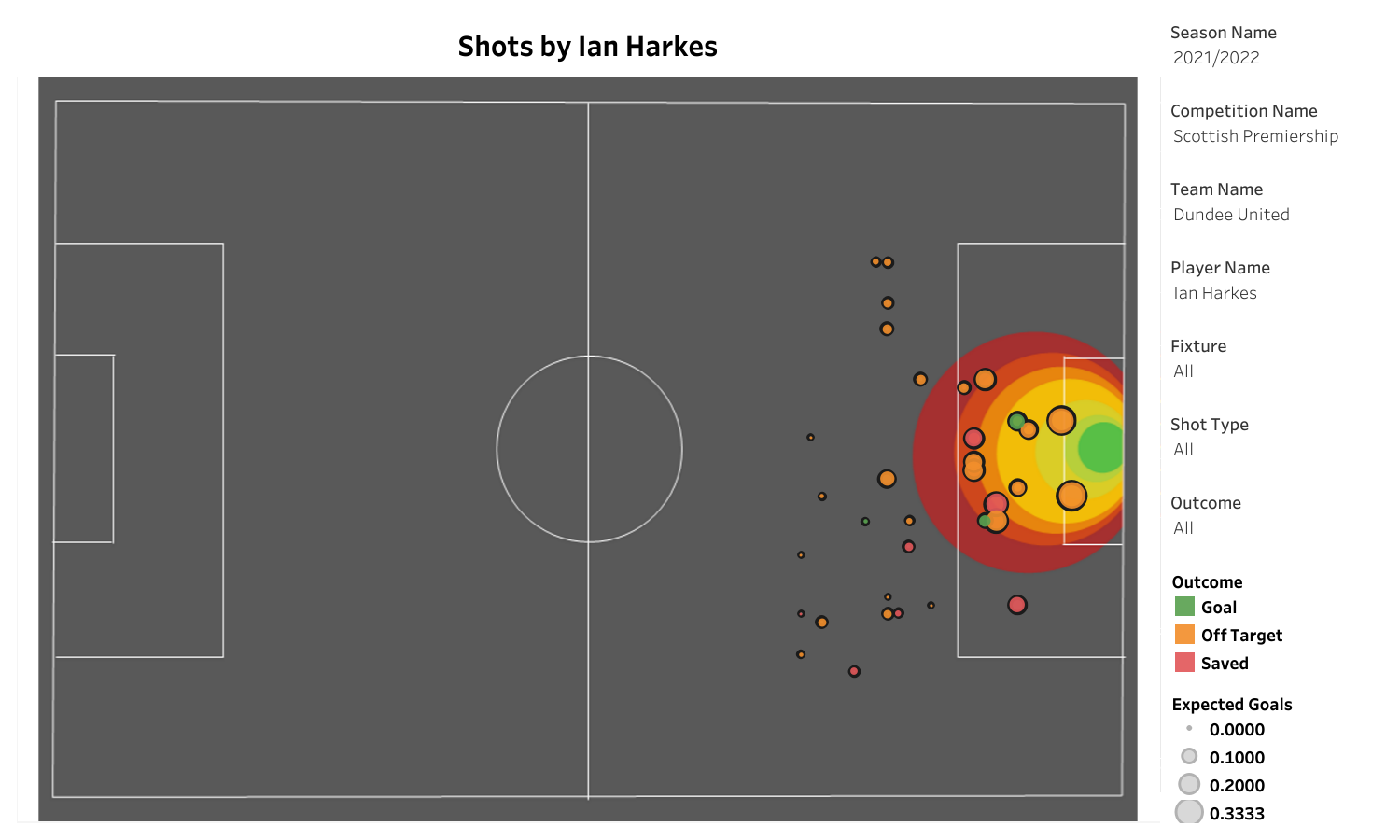 The 27-year-old was involved in 4.49 attacking actions per 90 minutes with a success rate of 38.17%. The above shot map shows all the 34 shots that were attempted by the midfielder. He averaged 1.16 shots per 90 minutes with a 26.47% shot accuracy rate. Harkes attempted 14 shots from inside the opposition’s penalty box. He managed to hit the target five times and converted two opportunities. The player attempted most of the shots from outside the penalty box, especially from the right side. This was his best goalscoring season for Dundee United. 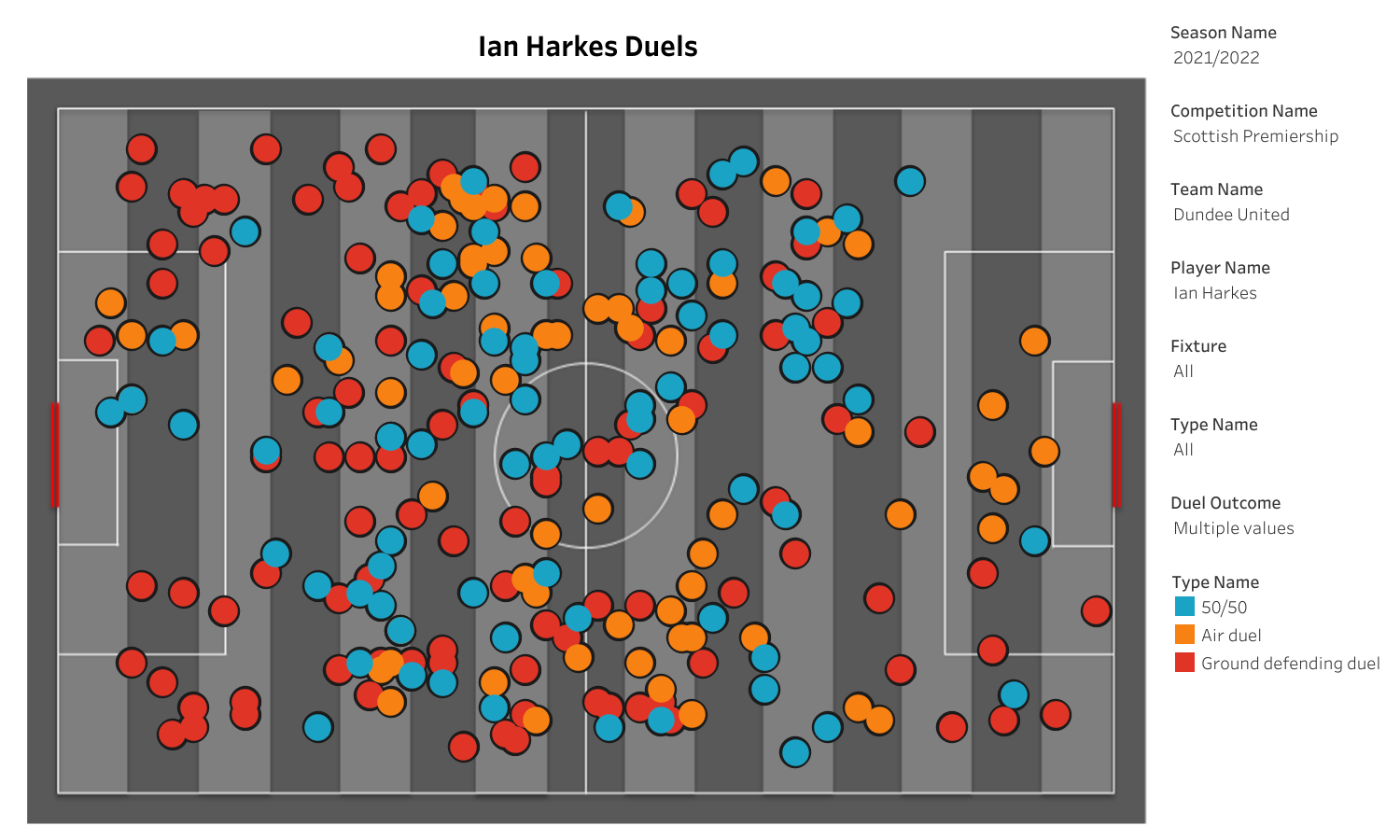 Harkes impressed everyone with his defensive stats last season in the Scottish Premiership. The player averaged 11.25 defensive actions per 90 minutes with a 78.35% success rate. The above viz shows all the duels that were won by the player. He contested 6.86 defensive duels, 4.83 aerial duels, and 4.59 loose ball duels per 90 minutes. He won most of the aerial duels and loose ball duels in the middle third and defensive duels in the defensive third. The midfielder was everywhere on the field to contest a duel for his team. Other than this, Harkes had 4.1 interceptions and made 7.9 recoveries per 90 minutes. He was highly ranked among other midfielders for winning defensive actions.

Ian Harkes is more like a box-to-box midfielder who is present everywhere on the field. He can create chances for his teammates and score goals himself. The player also has the ability to win duels. His work rate and contributions towards the team were the primary reasons behind his contract extension. Now, the player will look to add more goals to his tally and help his team to reach the European places in the Scottish Premiership table.