Jamie Murphy has made the switch to Scottish Premiership side St. Johnstone from Hibernian. The 32-year-old started his career at Motherwell in 2006 and joined English club Sheffield United after spending seven years in Scottish football. He then joined Brighton & Hove Albion and in 2018, made a move to Rangers. The player got limited opportunities at Rangers and was sold to Hibernian after a three-year spell. Now, the player has been signed by St. Johnstone to improve their attack. He carries a lot of experience from playing first-team football. St. Johnstone scored the least number of goals in the Scottish Premiership last season. They only managed to find the back of the net on 24 occasions in 38 league matches. Murphy can score and create goals for his side, and some of the stats below show how he can improve their attack next season.

The wide midfielder spent the first half of the season at Hibernian but was sent on a loan spell to EFL League Two side, Mansfield Town, for the second half of the season. Murphy made 18 appearances in the Scottish Premiership, in which he managed to score two goals and provide an assist. In England, he made 16 appearances and scored a goal, along with an assist. 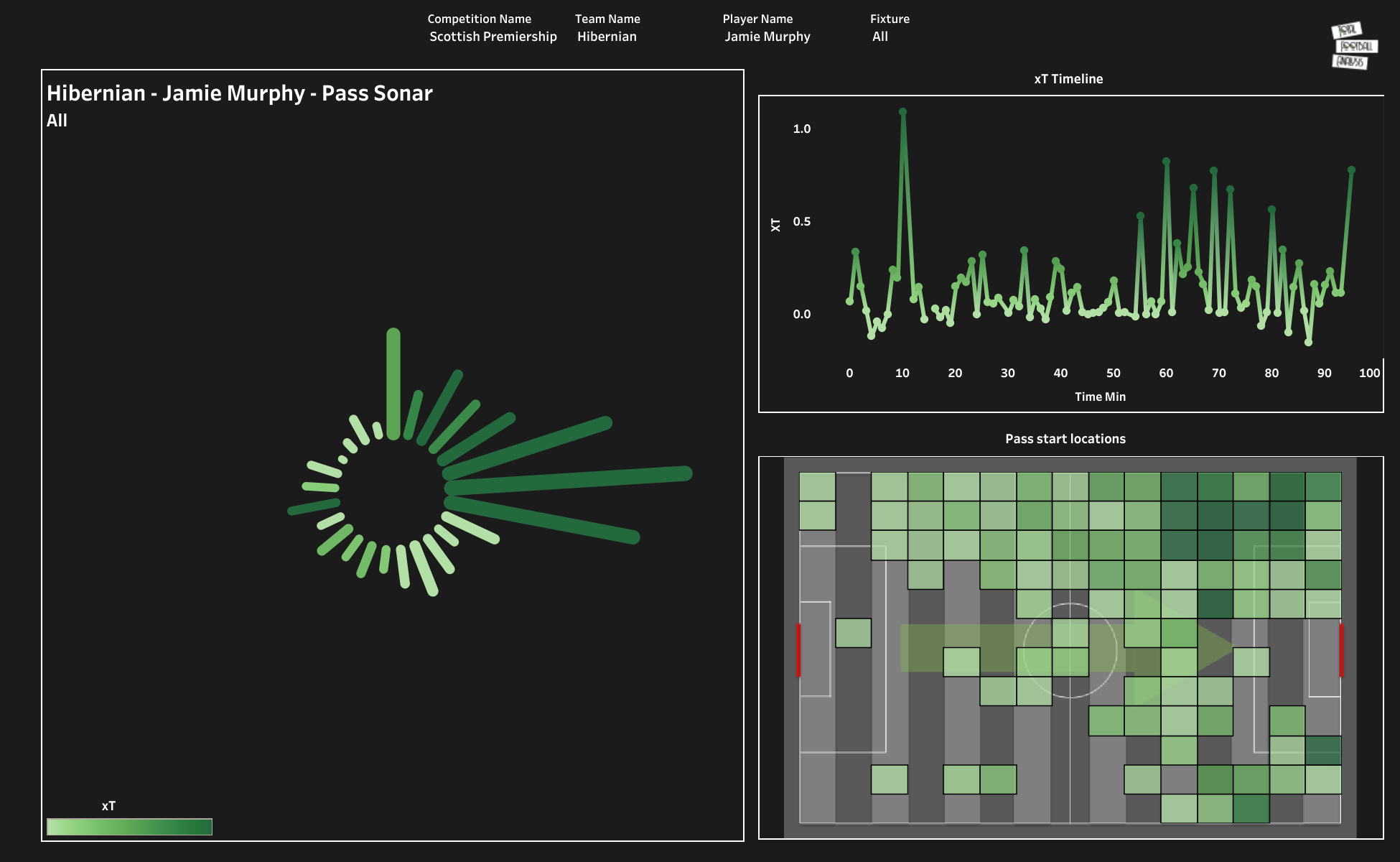 The above viz shows Murphy’s pass start location and threat created from passes at different time intervals in the Scottish Premiership last season. By looking at the pass start location map, we can observe that the player featured on the left side. He was used as a left-winger by the manager. Murphy stretched the opposition defence and made full use of the goal-kick line. He averaged nine dribbles per 90 minutes with a 71% success rate. He managed to take 4.11 touches per 90 minutes inside the opposition’s penalty box. This shows that the player likes to play a high attacking line and can create threats toward the opposition’s goal. 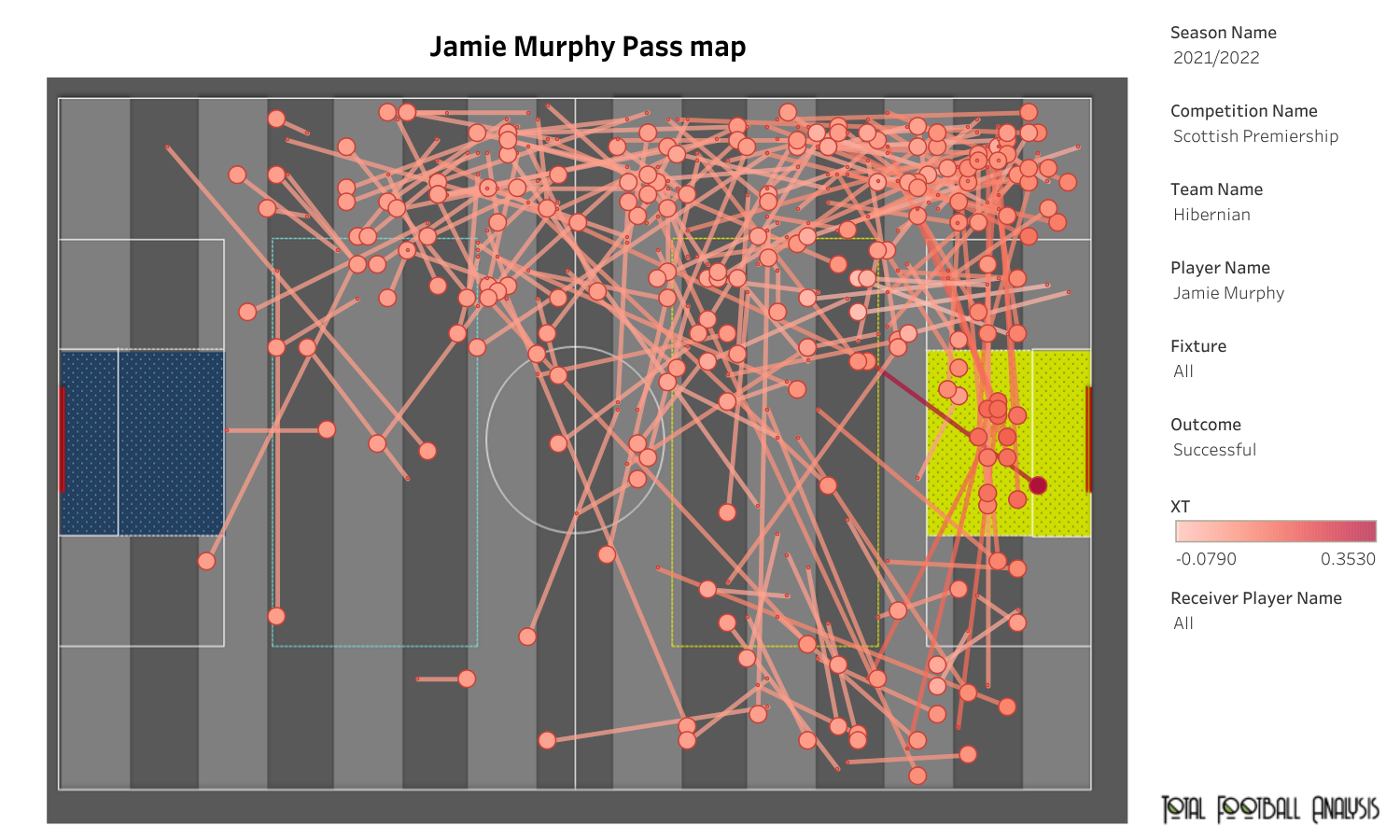 Murphy averaged 32.6 passes per 90 minutes with a low accuracy rate of 74.1%. The above map shows all the passes that were successfully delivered by the players in the Scottish Premiership. We can observe that some of the passes attempted by Murphy landed just near the penalty spot. He delivered some crosses to find his teammates inside the box. The player averaged 3.5 passes into the attacking third per 90 minutes and had a 58% success rate. Other than this, Murphy averaged 4.7 crosses, 0.91 smart passes, and 1.5 through passes per 90 minutes. The 32-year-old showed the variety of passes that he is capable of delivering. He can create goal-scoring opportunities with some quality passes delivered into the opposition’s penalty box. 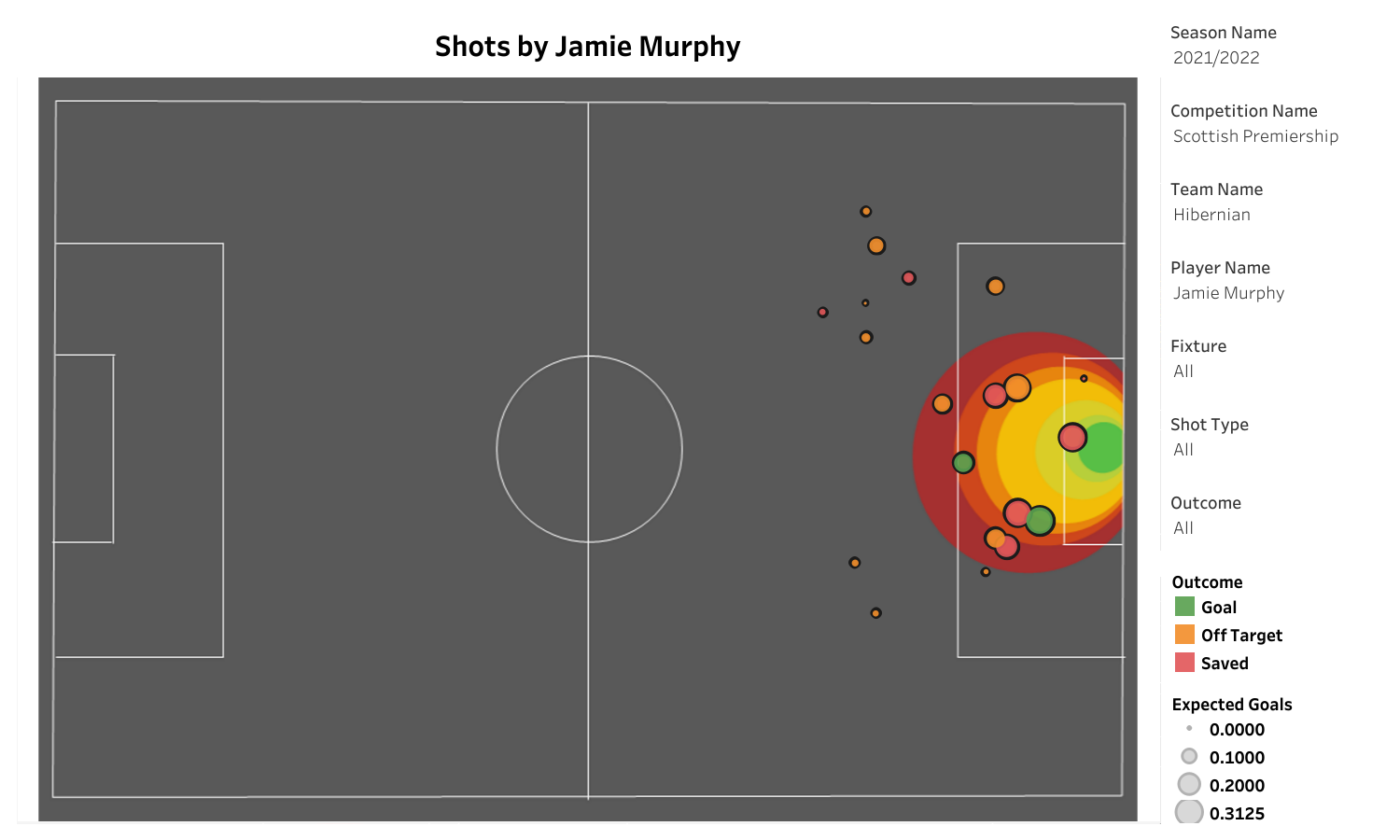 Murphy was also involved in 16.9 attacking actions per 90 minutes and had a 50% success rate. The above viz shows all the 20 shots that were attempted by the player. He hit the target nine times and scored two goals from inside the opposition’s penalty box. The wide player attempted a few shots by cutting inside and aiming for the far or near post.

The 32-year-old is an attacking threat toward the opposition’s goal. His experience will be useful for St. Johnstone, who have struggled to score goals this season. They will try to add more goals to their tally and climb up the Scottish Premiership table. Jamie Murphy could turn out to be their top performer next season.