Celtic signed right-back Josip Juranović from Legia Warszawa towards the start of last season. The full-back won the Scottish Premiership league title in his first year at the club. He made 26 appearances in the league and made four crucial goal-scoring contributions. His performances were getting noticed by the other clubs, and now the Croatian full-back is on the transfer radar of a few English Premier League clubs. The 26-year-old was effective with his passing and created some threats. This is the reason why the player was named in the PFA Scottish Team of the Year.

Juranović made 26 appearances for the Scottish Premiership champions, and three of those came off the bench. He scored three goals and provided an assist. 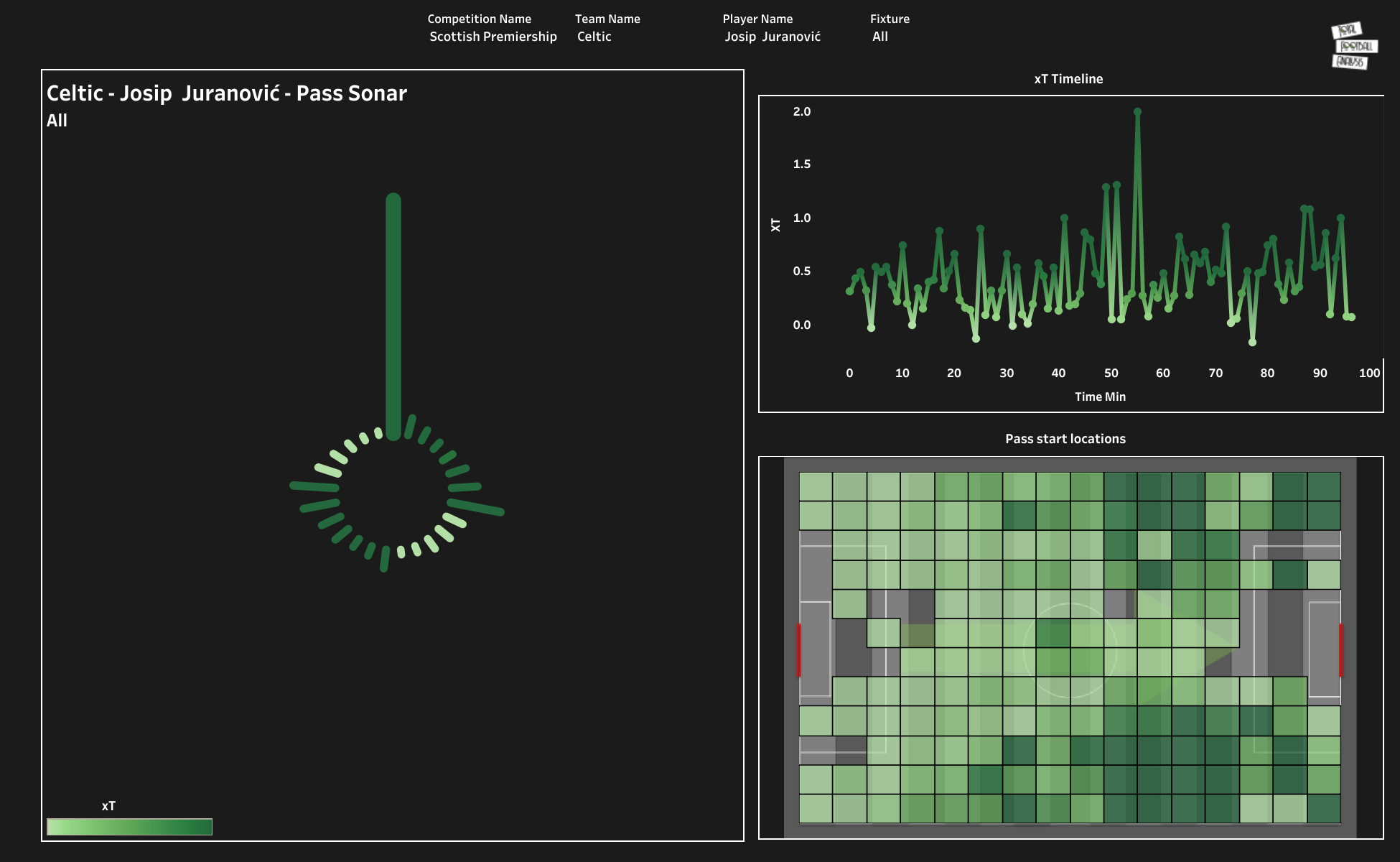 The above viz shows the pass start location as well as the threat created from passes at different time intervals. Juranović played as a right-back and also as a left-back in some of the matches. He showed versatility on the pitch and was effective on both sides of the pitch. The pass start location shows that the player penetrated the opposition’s penalty box more from the right side. He stayed wide towards the left and delivered passes from the wider positions. The xT timeline shows that Juranovic created more threats during the middle period of the matches. He was more effective in the second half with his passing. 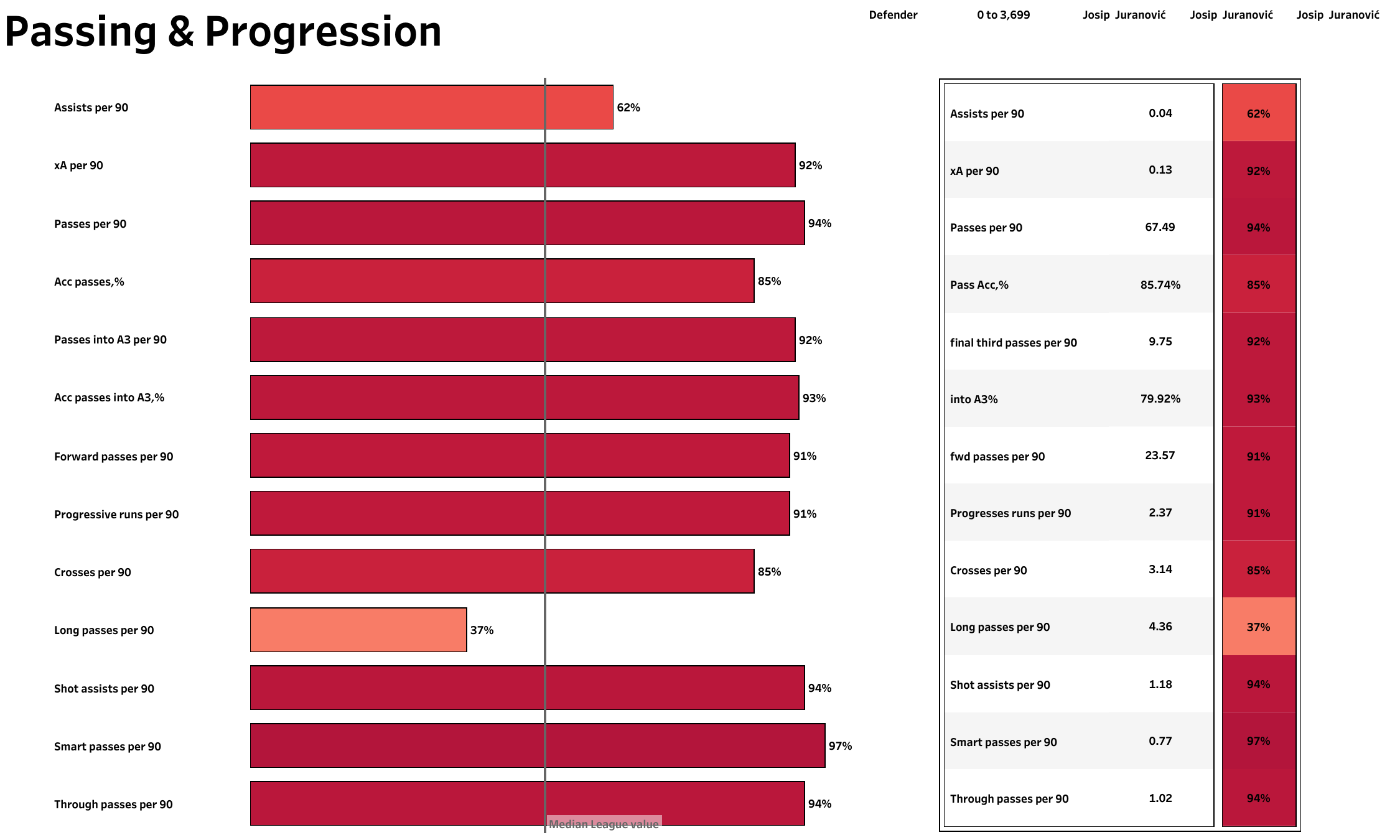 The above viz shows the passing stats of Juranović in comparison to other defenders in the league. When looking at the above chart, the general rule is that the longer the bar, the better the performance — you can see the league average in the middle, and the % is the percentile rank the player is in. Juranović averaged 67.49 passes per 90 minutes with an accuracy rate of 85.74%. Of these passes, 9.75 were attempted into the final third per 90 minutes with a high accuracy rate of 79.92%. Notably, the full-back had a very high percentile rank for the above-mentioned passing stats in the league. 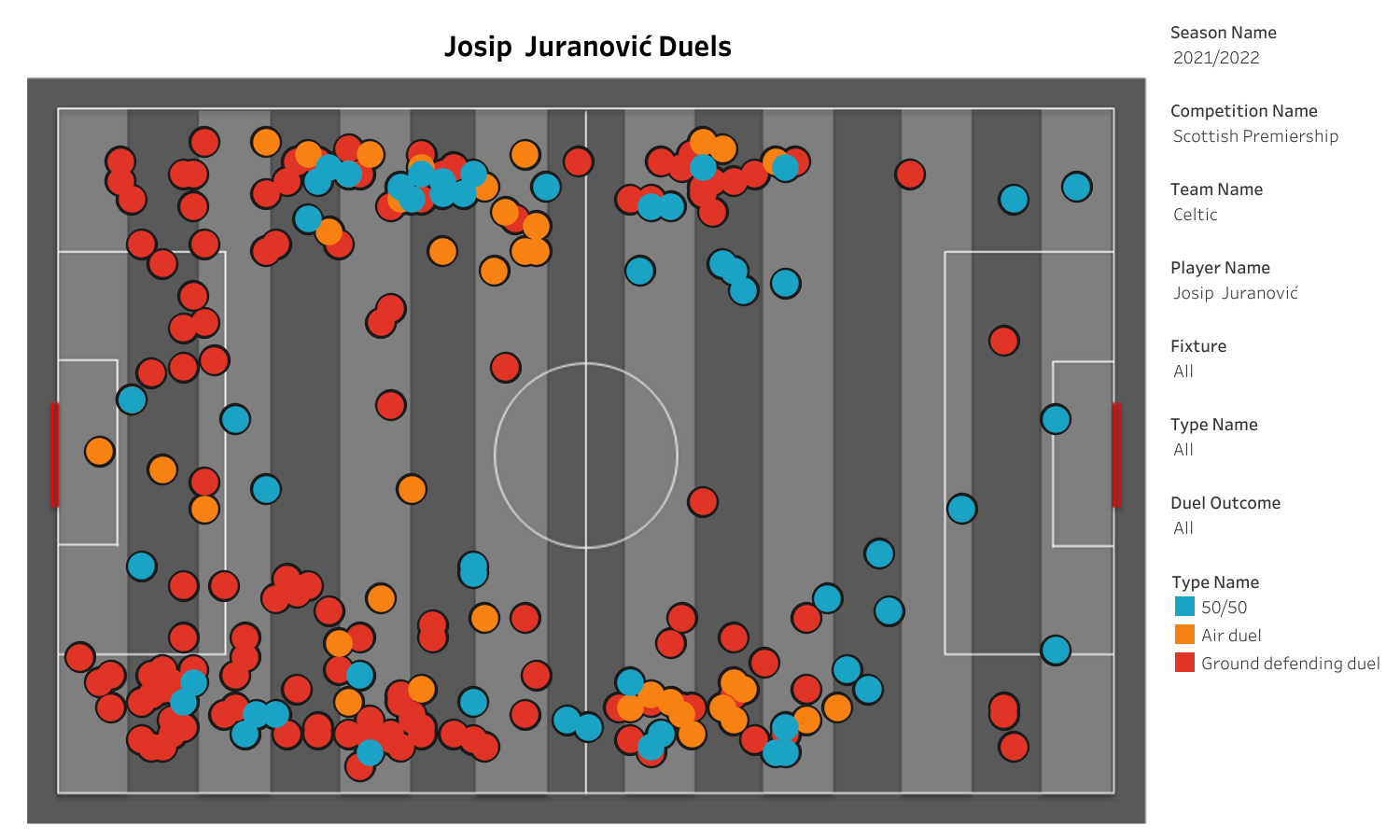 Juranović was involved in 9.22 defensive actions per 90 minutes with a 79.2% success rate. The above viz shows all the duels that were contested by the 26-year-old Croatian full-back. Celtic were an attacking team, and their players were involved in fewer duels. Juranović contested 5.26 defensive duels, 1.59 aerial duels, and 2.16 loose ball duels. He had a win percentage of 18.6% for defensive duels, 38.46% for aerial duels, and 41.51% for loose ball duels. Other than this, he made 3.83 interceptions per 90 minutes and also made 8.93 recoveries. Of these 8.93 recoveries, 3.75 were made inside the opposition’s half per 90 minutes.

The 26-year-old created a lot of threats with his passing. He made a lot of forward runs and was versatile on the pitch. Josip Juranović even scored three goals, all of them from the penalty spot. He was a crucial part of the team last season, and Celtic will look to retain him. However, if the club gets a good amount of money for the player, they might sell him.