Ross County finished the Scottish Premiership season in the sixth position after a disappointing Championship Round. They played five matches and only collected one point. Ross County finished their last ten games with three wins, two draws, and five losses. One of the biggest struggles behind their poor form was scoring goals. They only scored six goals in ten games. One of the main reasons behind their failure was the form of the top goalscorer, Regan Charles-Cook. The forward finished as the joint-top goalscorer in the league but failed to score a goal in the last ten matches. He was their standout performer throughout the season and made it to the PFA Team of the Year. However, his form in the last few matches cost him a place in the Scottish Premiership Team of the season. Here are some of the stats that will show how his performances dipped towards the end of the season. 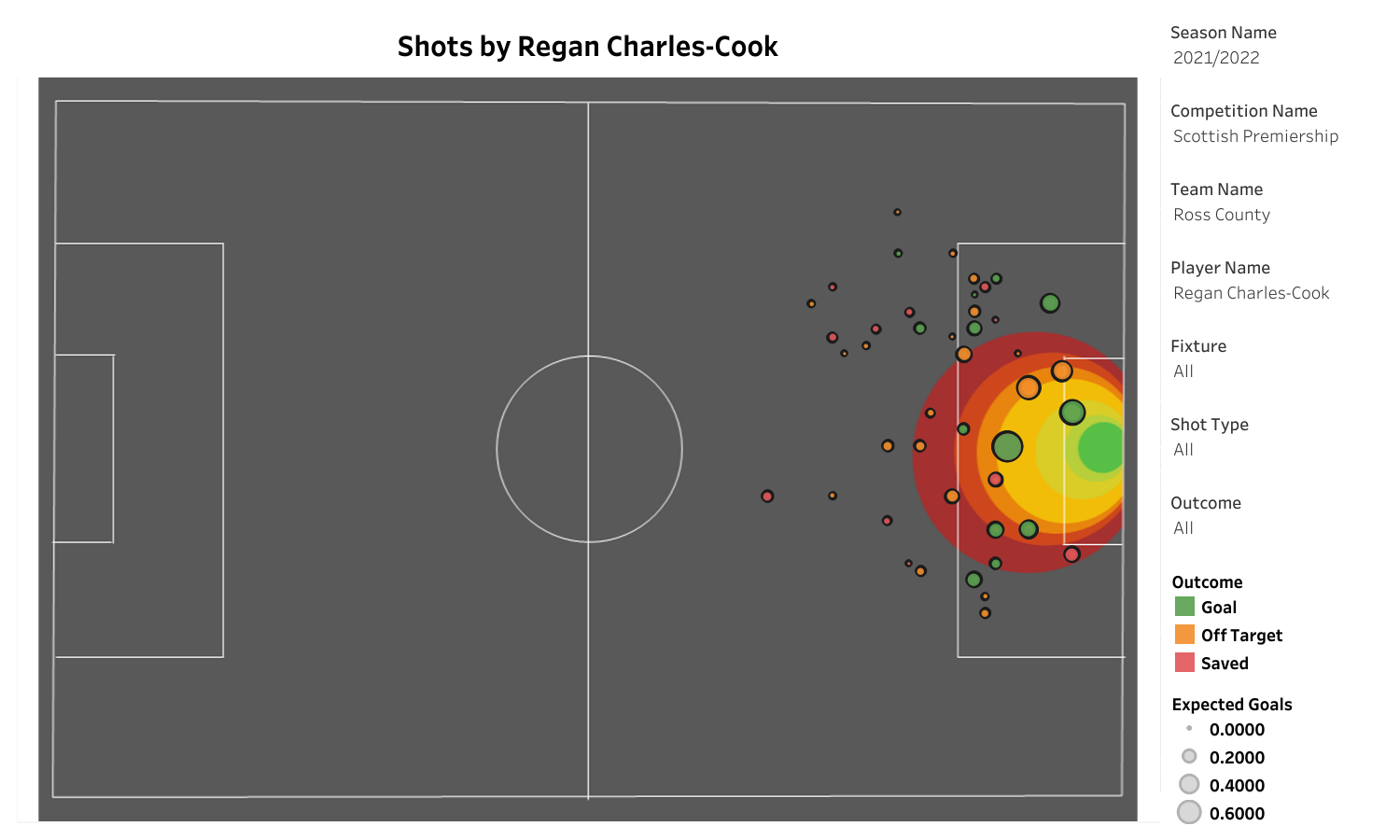 Regan Charles-Cook scored 13 goals in the Scottish Premiership this season, and one of those goals came off the penalty spot. The 25-year-old made 37 appearances, and the goals were scored in the first 27 appearances. The above shot map shows all the shots attempted by the player throughout the season. He attempted 41 shots and managed to hit the target 25 times. He had a high shot accuracy rate of 61%. Of these 41 shots, 26 were attempted from inside the opposition’s penalty box, with 15 on target. 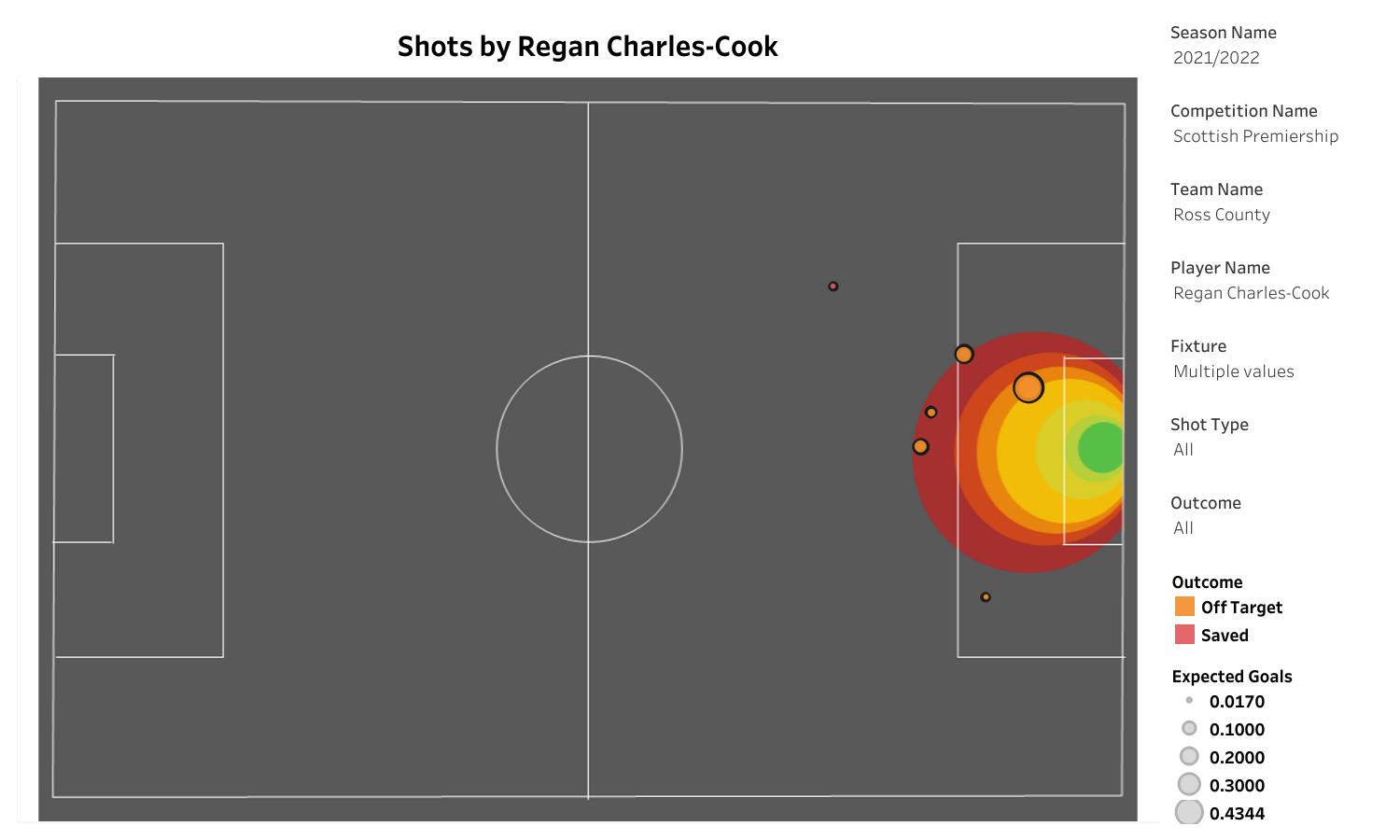 However, the player struggled in the last ten matches. He only attempted six shots and only one was on target. The average number of shots per game dropped from 1.3 to 0.6. Regan Charles-Cook failed to create threats, and his side struggled to score goals. This was one of the biggest reasons behind his side’s poor end to the season. Another reason behind the struggle was that he only took 13 touches inside the opposition’s penalty box. He took 62 touches in the other 27 games and averaged more than two touches per game. 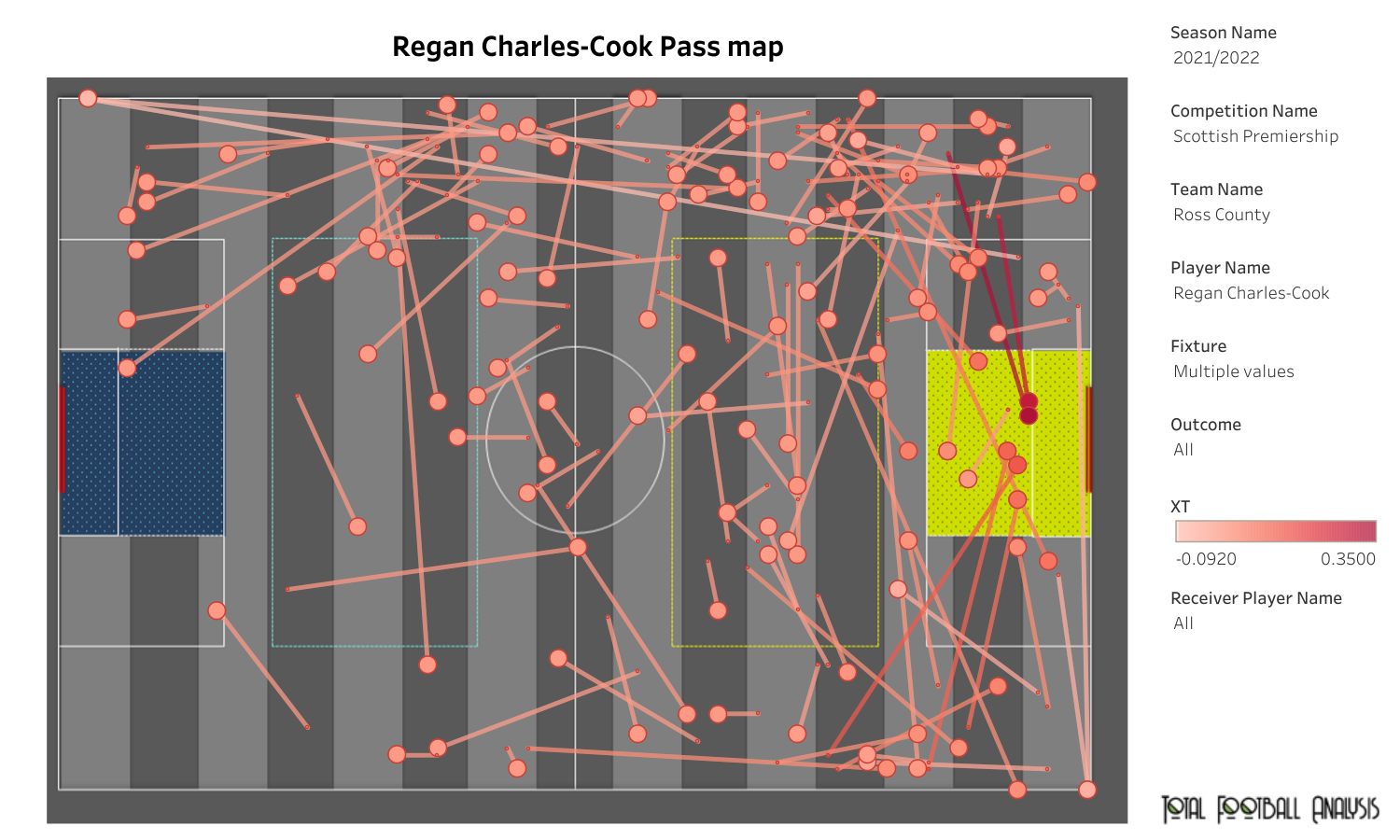 The forward featured on the left side throughout the season. Overall, he provided two assists this season. The above viz shows all the 142 passes attempted by the 25-year-old in the last ten matches. These passes included 19 crosses and one smart pass. A total of 18 passes were attempted into the opposition’s penalty box by the player, and two balls were aimed into the 6-yard box. Regan Charles-Cook failed to deliver in front of the goal in the last ten games. However, his performance was also affected by his team’s performance. The player showed plenty of promise and a lot of other clubs would be eyeing a move for him. He finished the season with 13 goals and will look to score more goals next season.