Celtic will face their biggest test of the season when they play host to Hearts in the Scottish Premiership. Both teams have had an unbeaten start to the season, with Celtic having a 100% win record and Hearts having seven points in three games. These two teams finished in the top-three positions last year, and this match promises to bring a lot of excitement.

Celtic enter this match after a 5-0 victory over Kilmarnock. They have scored ten goals with a high average xG rate of 3.34. Ange Postecoglou’s men have been solid in defence and have only conceded one goal.

Hearts earned a 4-1 victory against Dundee United in the last game. They showed total dominance and have scored seven goals so far this season with an average xG rate of 1.47. Hearts have failed to keep a clean sheet in any of these matches and have conceded one goal in each match.

Now, let us look at the three things that these two teams are capable of producing on the pitch.

The stats of both teams hint that this could be a high-scoring game. Both teams have been on the front foot against their previous opponents and will once again try to break each other’s defence till the final whistle blows. 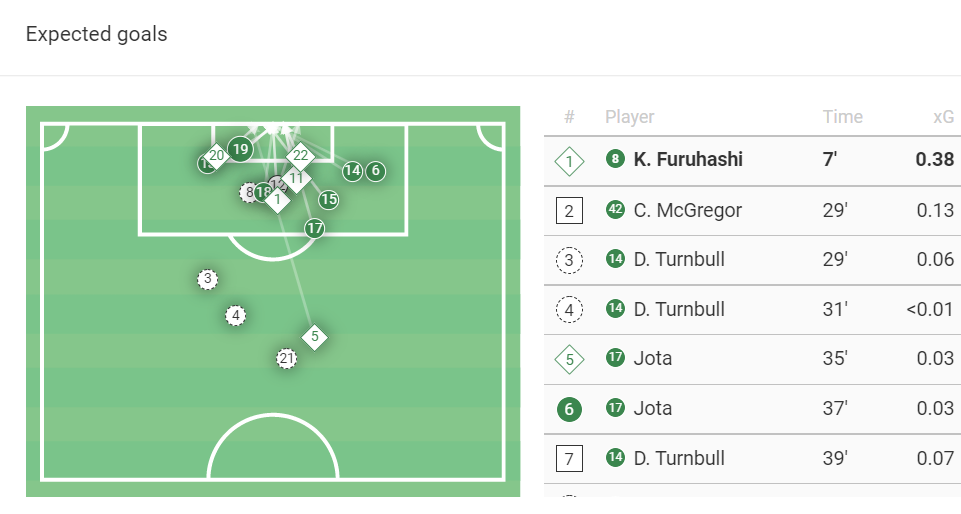 Celtic average 40.33 positional attacks and have attempted 14 shots on an average from these attacks. The Celts’ overall average was 22 shots with a 42.4% shot accuracy rate. They are a very attacking side. In the last match, Celtic players attempted 22 shots, with 12 hitting the target. They often penetrate the opposition’s penalty box, and most of the shots on target in the last match were attempted from inside the penalty box. 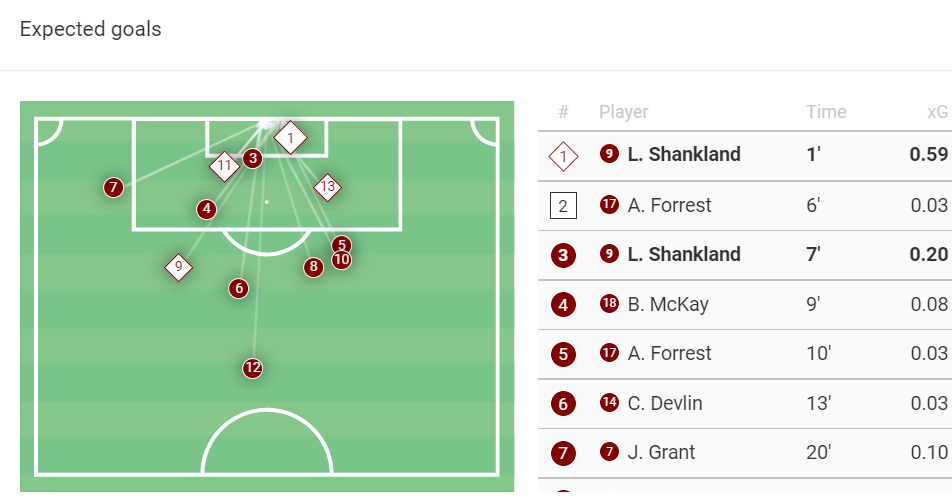 Hearts average 27 positional attacks per game, and they average nine shots per match from these attacks. Overall, Hearts average 12.67 shots per match with a high accuracy rate of 58%. In the last match, Hearts attempted 13 shots and hit the target 12 times. They are clinical in their finishing and will look to convert any given opportunity against a better Celtic side.

Celtic’s engaging play on the left side 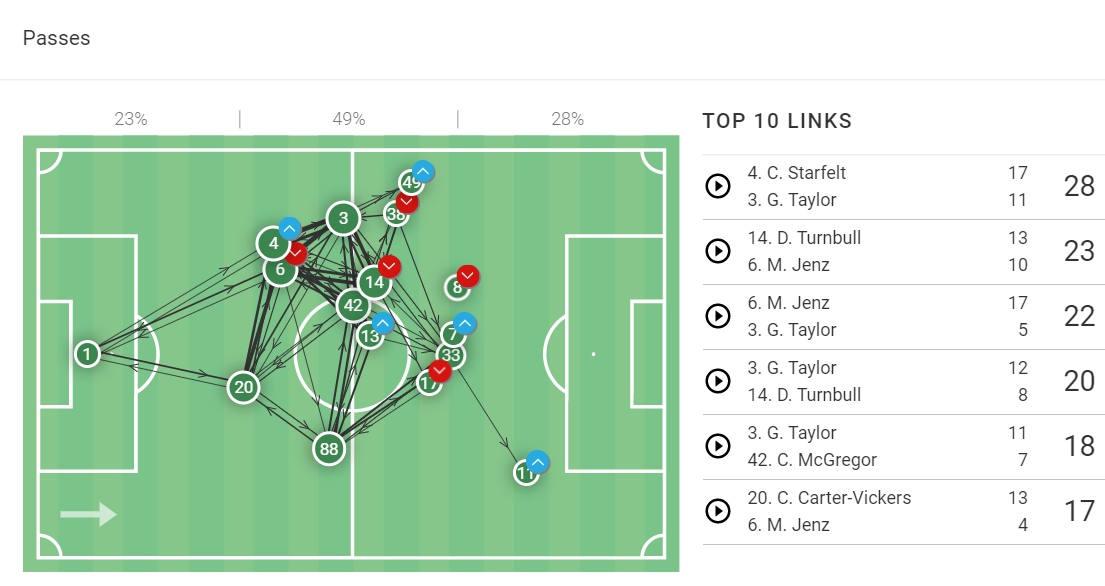 Celtic have been busy on their left side this season. Greg Taylor has had more involvement in attacking play than Josip Juranović. The above viz shows the passing links of the players and their average position. This shows that the players played a lot closer to each other on the left side. They even had a very high duel win rate and recovery rate on that particular side. Hearts’ manager, Robbie Neilson, will look to deal with this problem by making the necessary changes to the team tactics. 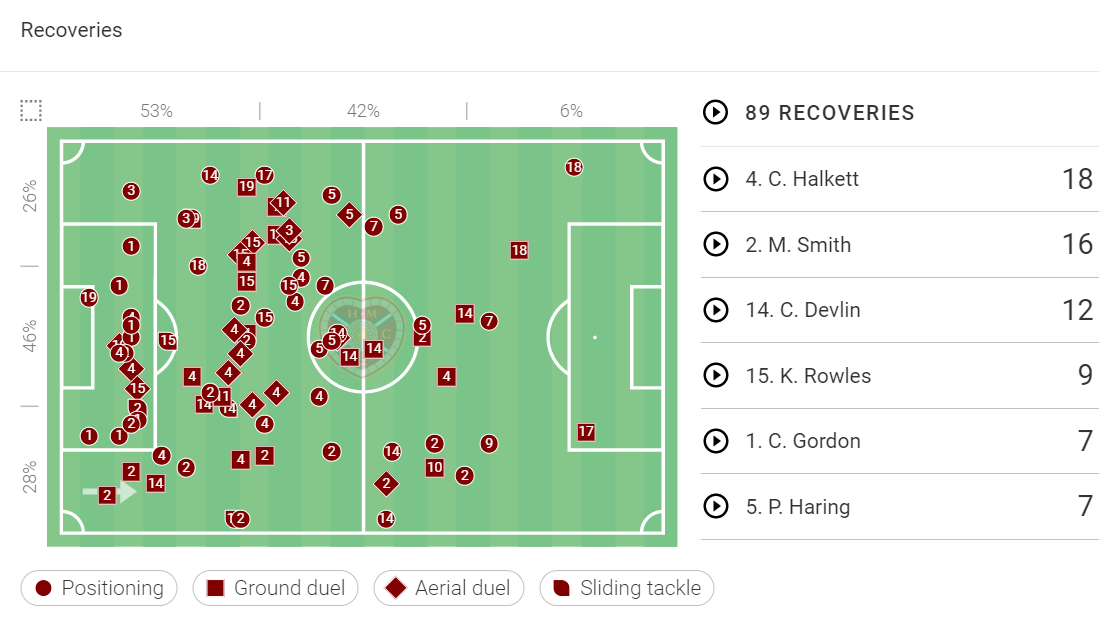 Hearts will find it difficult to keep hold of the ball. They will look to break Celtic on the counter, and for that, they need to win the ball in crucial areas. Hearts have won duels and made recoveries in crucial areas in the previous matches to clear away the danger. They average 95 recoveries per game, with 35 recoveries in the middle third. The above viz shows that Hearts’ defence recovered the ball just when it entered the defensive third. Other than this, they have a 62% win rate for defensive duels and a 51% win rate for aerial duels. Celtic will face their toughest opponents so far this season.

Reo Hatate could return to the starting XI after recovering from an injury. Ange Postecoglou will go with the same squad for this match.

Craig Halkett could miss this fixture after getting injured in the UEFA Europa playoff match. Other than this, there are no new injury concerns for the team.

Celtic will look to keep their 100% record for the season when they face Hearts at home. Both teams had a good start to the season and will look to continue with the same momentum. Celtic are the better team on paper and are favourites to take three points from this game.