Rangers will host St. Johnstone at the Ibrox stadium in the Scottish Premiership. The hosts will be looking for their third consecutive win after midweek heroics in the UEFA Champions League qualification rounds. St. Johnstone also registered their first win of the season against Motherwell last weekend, and that will be a confidence booster for the squad after struggling for points last season.

In the last game, Rangers hosted newcomers Kilmarnock and registered a 2-0 win. Giovanni van Bronckhorst’s men have now scored four goals and only conceded a single goal. Their xG rate was 2.11 in both matches, and they dominated ball possession throughout the two matches.

St. Johnstone made the trip to Motherwell and came out as the winners with a 2-1 scoreline. After failing to create enough chances in the first match, St. Johnstone showed some improvement against Motherwell. They had more possession of the ball than in the previous match and created more goal-scoring chances.

Let us look at three key things that one should look out for in the match.

Rangers’ creativity on the right 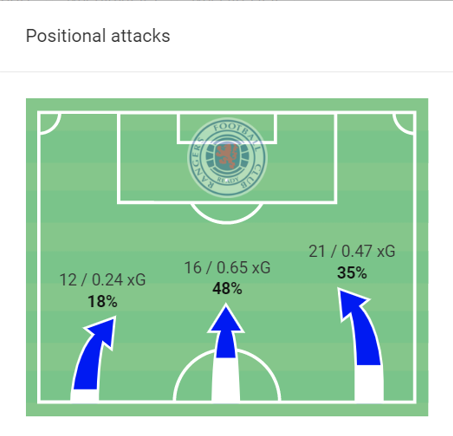 Rangers and Celtic are the two most attacking sides in the Scottish Premiership. Last season, right-back James Tavernier was the top goalscorer and the highest assist provider for the Gers. This season, the attacks are coming from the same zone. They play a high line on the right side. Rangers average 45 positional attacks per match. The above viz shows the positional attacks created in the first match. 49 attacks were attempted, with 21 coming from the right side. In the last match, they attempted 41 positional attacks, and 19 of them came from the right side. Rangers will, once again, focus their attention on this particular side, with Malik Tillman likely to support Tavernier after scoring a goal in midweek.

How can St. Johnstone deal with Rangers’ attacking wave? 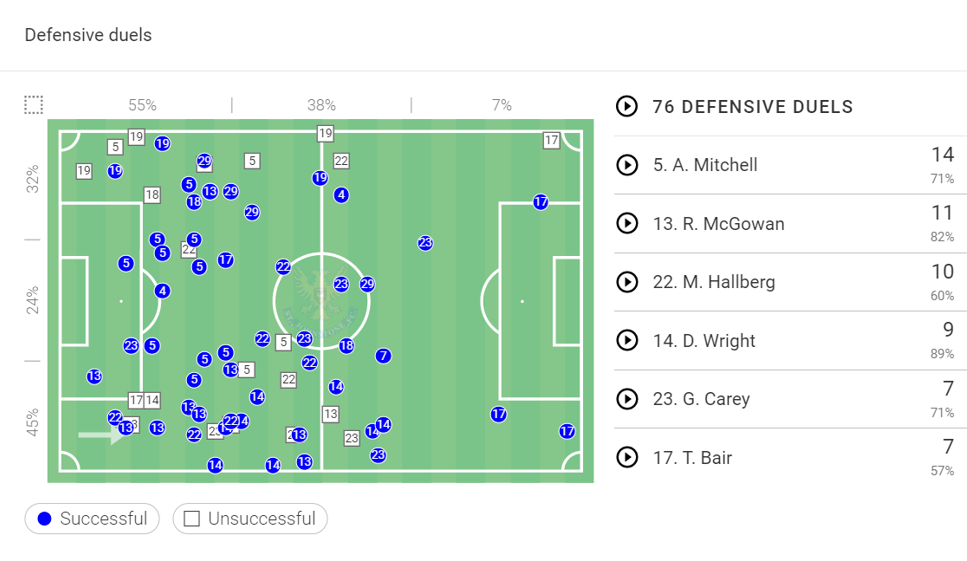 St. Johnstone players will have to defend more in this match than they did in the other two matches. They will try to stop this constant wave of Rangers defence by winning duels in crucial areas. They average 218 duels per match with a 54% success rate. The defensive duels win percentage is at a high. They contested 77 defensive duels each in their last two matches and, overall, have a win rate of 70.8%. The above viz shows that the visitors have won duels in crucial areas and have not allowed the opposition to take shots. 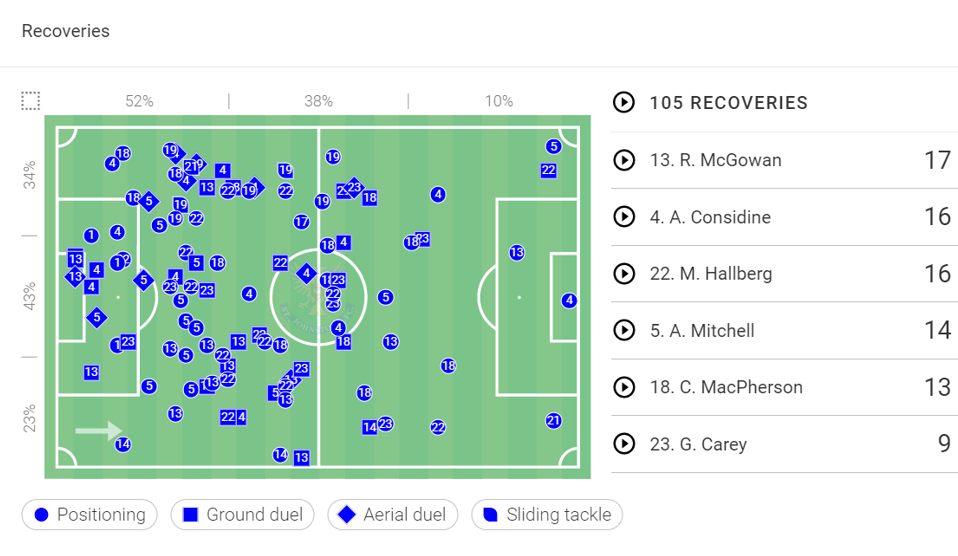 St. Johnstone players will also look to recover the ball in crucial areas like they did in the first two matches. They average 90.5 recoveries per match, with 45 coming in the defensive third and 35 in the middle third. The above viz shows that St. Johnstone’s players positioned themselves well in the middle third to recover the ball. In the defensive third, most of the recoveries were made by winning duel after duel. They will deal with more attacks in this match and have to keep their win percentage high to keep a clean sheet. 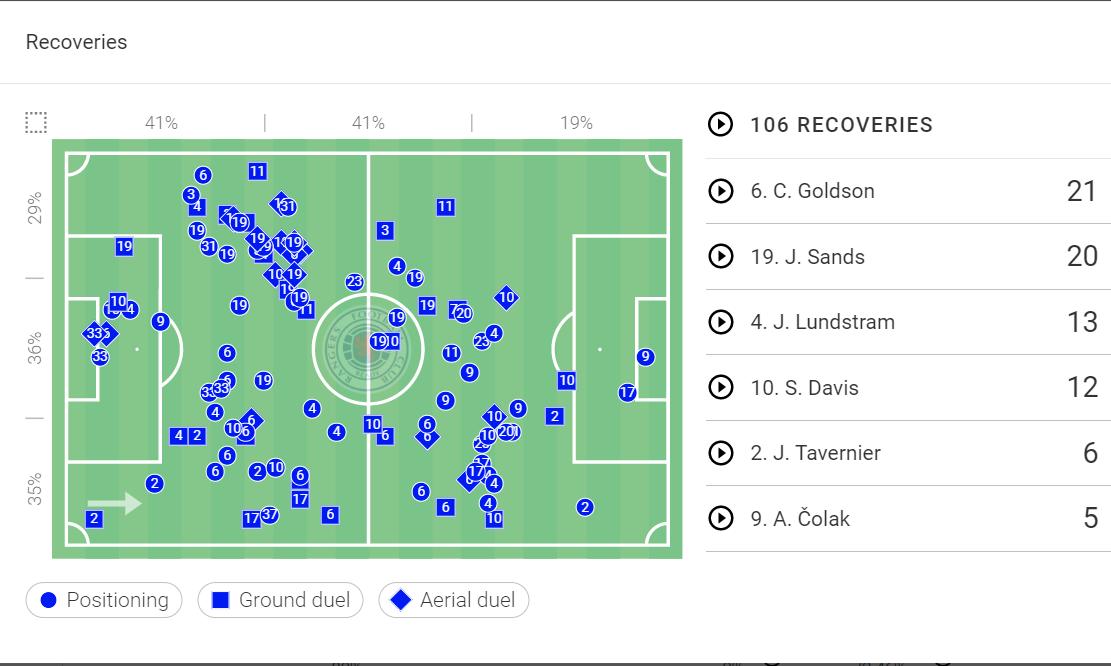 It won’t be easy for St. Johnstone players to stop the attacking wave of Rangers. Rangers have recovered the ball in crucial areas, and that has led to continuous attacks. The Gers average 98 recoveries, with 41 coming in the middle third and 25 in the attacking third. The above viz shows that most of the recoveries in the attacking third are made on the right. The opposition tries to attack from the opposite side, but Rangers players recover the ball by winning duels in the middle third. This shows that St. Johnstone players will struggle to get past the Rangers’ defence.

Ryan Kent recovered from his injury and played the full 90 minutes in midweek. He will take back his position on the left side. Malik Tillman has also impressed everyone since he joined from Bayern Munich. He will be pushing for yet another start, but this time on the right side. Alfredo Morelos is yet to start his first match of the season. He will be eager to replace Antonio Colak in the number nine role. Ianis Hagi, Filip Helander, and Kemar Roofe are still sidelined with injuries.

Murray Davidson could return to the starting XI after serving his one-match suspension. Callum Booth, Chris Kane, David Wotherspoon, and Tony Gallacher won’t be available for the visitors.

Rangers will be the favourites to take three points from this game. They will look to improve their goal difference and stay close to Celtic. St. Johnstone have confidence from their last game, but this won’t be an easy game for them. They will be happy with a single point from this game.