St. Mirren showed their interest in Aberdeen’s centre-back, Declan Gallagher. The Buddies completed the signing of the 31-year-old on a free transfer. The Dons are one of the most active clubs in the Scottish Premiership transfer window. They are looking for a top-half finish in the league table next season. Gallagher was signed on a free transfer from Motherwell at the start of last season. He was unable to cement his place in the starting XI and made 22 appearances in the league. The Scottish centre-back was not listed in Aberdeen’s plans for next season, and this was the reason behind his transfer. St. Mirren finished above Aberdeen in the league table, and they are also aiming for a top-half finish in the next season. Gallagher has a lot of experience playing in Scotland, and here are the stats that show what the defender brings to the table. 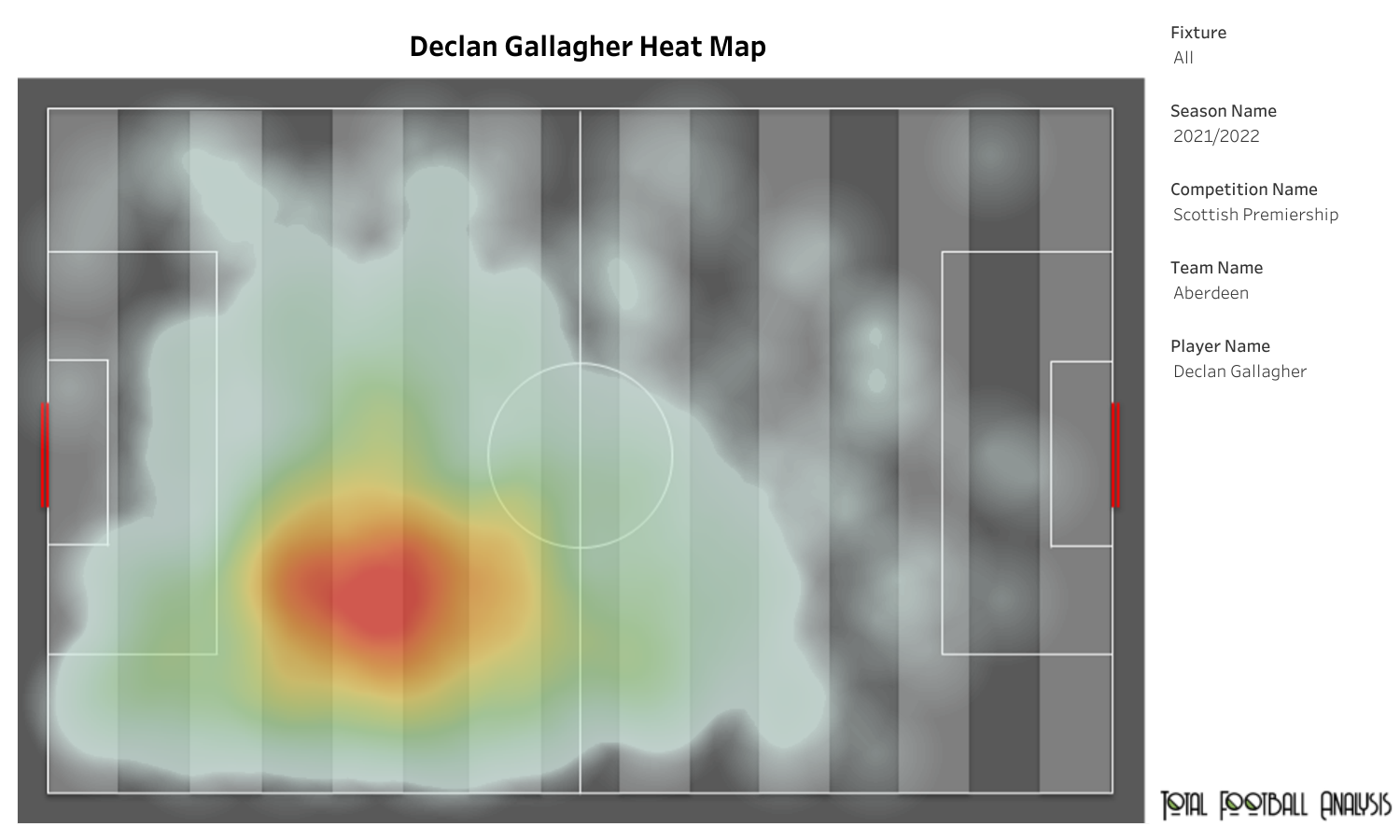 Gallagher started in 20 games for the Dons in the Scottish Premiership in the 2021/22 season and came off the bench in the other two matches. He was unable to score a goal but provided an assist to one of his teammates. By looking at the above heat map, we can observe that Gallagher played in the right centre-back position for his side. Gallagher averaged 48.86 passes per 90 minutes and had an accuracy rate of 84.4%. The player was positive with his passing and attempted 23.73 forward passes per 90 minutes. This shows that he can create plays from the back and help his side carry attacking threats from the back. 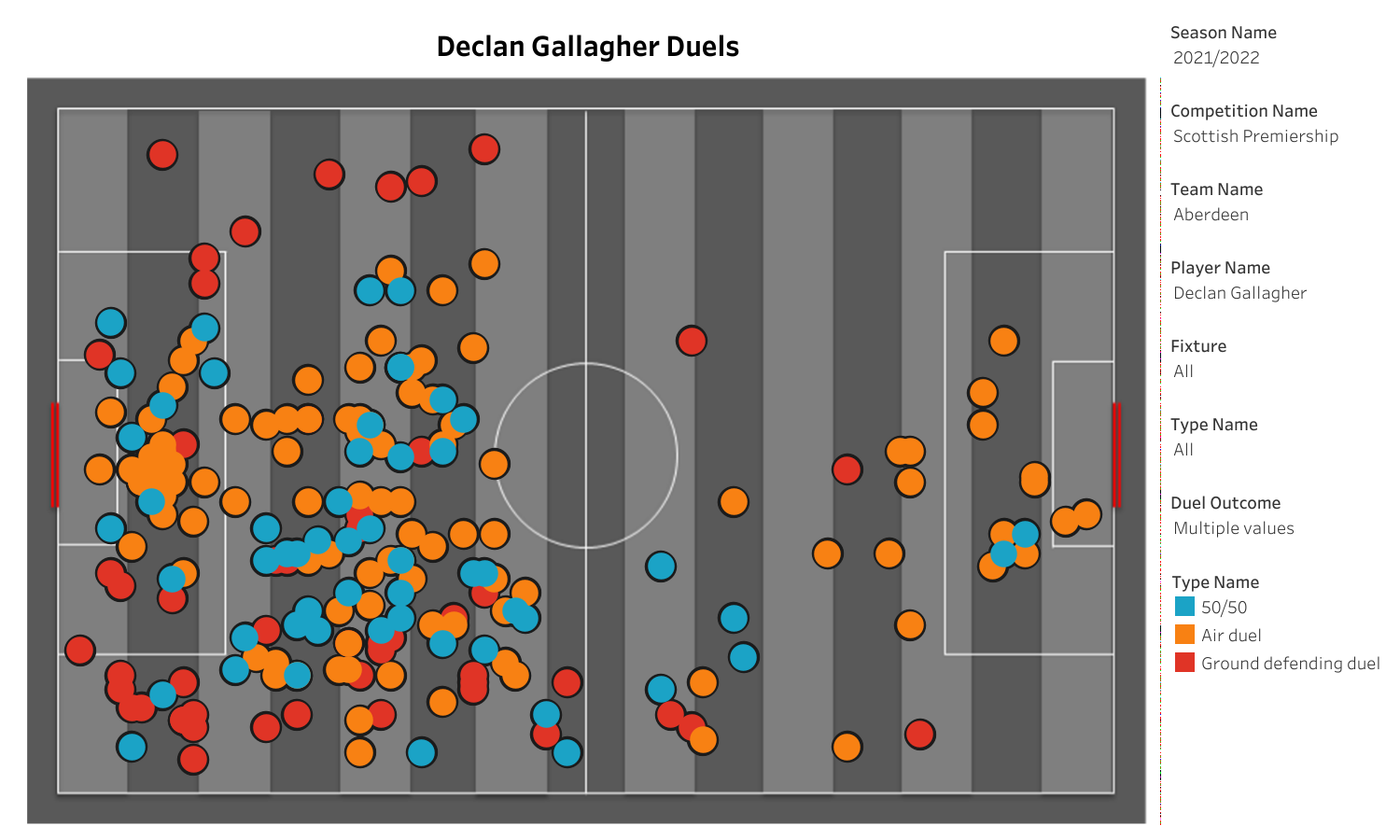 The centre-back was involved in 10.8 defensive actions per 90 minutes last season with a success rate of 81.7%. The above viz shows all the duels that were won by Gallagher or the duels that ended in a neutral result. Gallagher contested 5.3 defensive duels, 7.6 aerial duels, and 3.42 loose ball duels per 90 minutes. His success rate was 23.4% for defensive duels, 62.66% for aerial duels and 56.34% for loose ball duels. Gallagher is a threat in the air. He won almost five aerial duels per match and a few in the opposition’s final third. This also shows that the centre-back is a threat to the opposition goal during set-pieces. 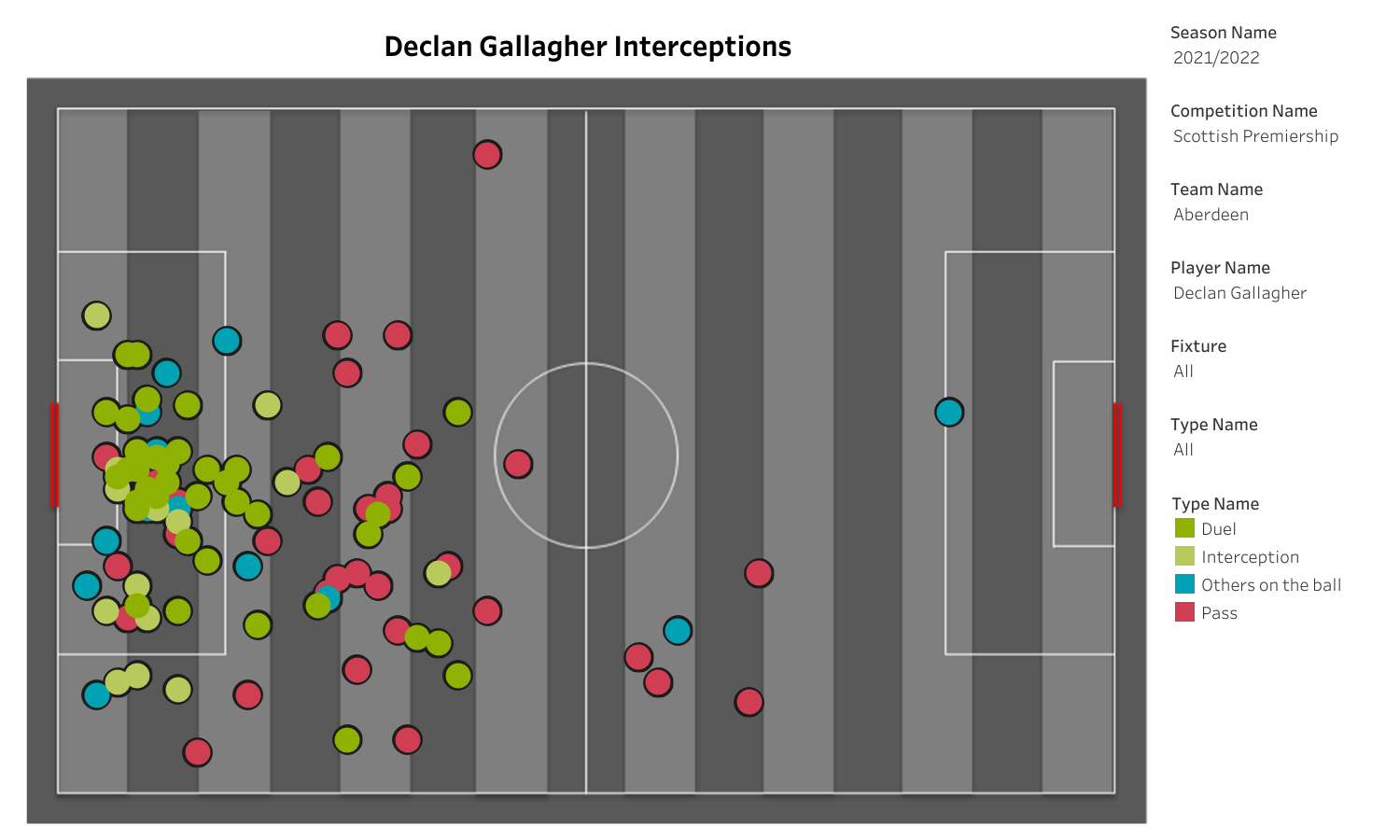 Gallagher made most of the interceptions inside the defensive third. He averaged 5.11 interceptions per 90 minutes, and most of them were made while contesting a duel. It can also be observed that the 31-year-old intercepted a few passes attempted into the opposition’s final third by the opponents. Other than this, Gallagher averaged 13.07 recoveries per 90 minutes, but only 1.01 of them were made inside the opposition’s half. Gallagher can smell danger and can stop the ball from reaching the defensive third of the team.

The centre-back has plenty of experience playing in the Scottish Premiership. He can lead the defence and help his side achieve their goals. The manager will look to adjust him to the starting XI and hope that Gallagher settles before the season’s commencement.