Everton’s youngster, Ellis Simms, joined Hearts on a loan deal in January. Since then, the 21-year-old centre-forward has appeared in every league match for the Scottish Premiership side and played a crucial role in his side’s third-place finish. The Hearts manager is keen on getting the player back on loan or a permanent deal. However, he is facing a challenge as a lot of clubs, including Rangers, are also eyeing a move for the centre-forward. This was the second loan spell of his career, and he is already on the wishlist of a few clubs. Here are some of the stats that show why clubs are interested in signing the player and why Hearts should consider retaining the striker. 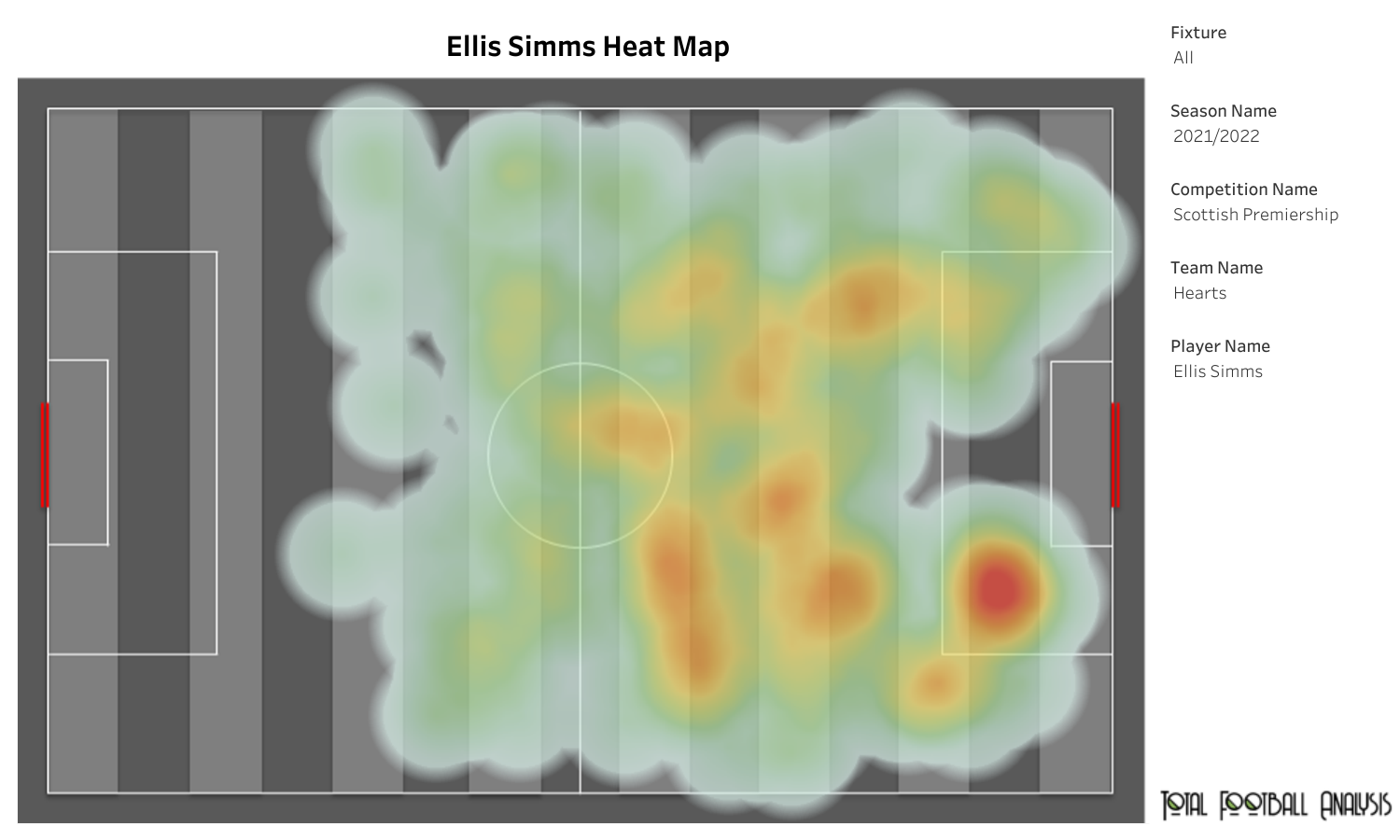 The 21-year-old made 17 appearances for Hearts in the second half of the season. He scored five goals and also provided an assist. The striker, sometimes, led the line or played just behind the striker or on the wings. The above heat map shows that his average position was towards the right side. He penetrated the opposition’s penalty box and took 64 touches inside the opposition’s penalty box. The player is flexible with his positioning and is a good asset to have in the team. 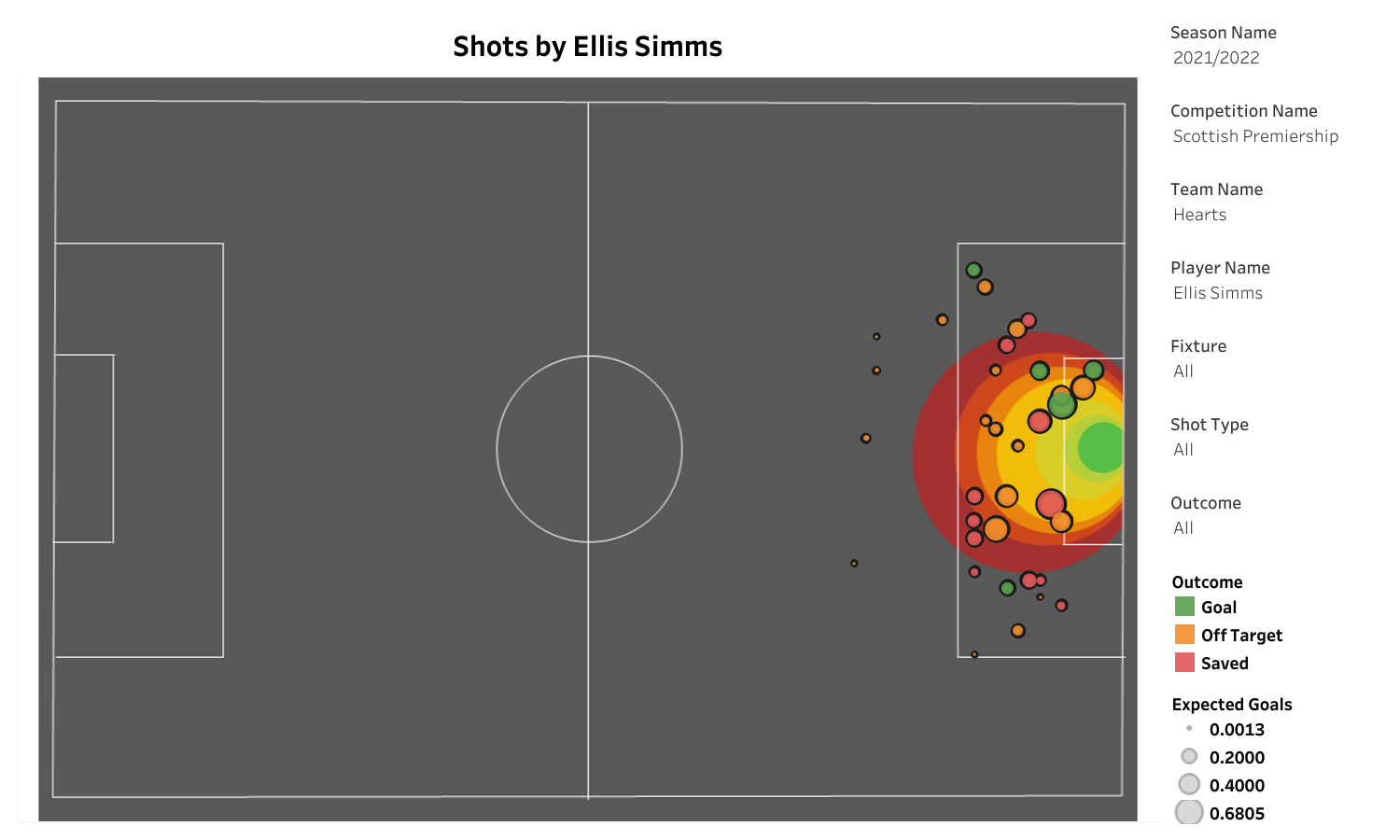 Simms found the back of the net on five occasions. The above shot map shows all the 36 shots that were attempted by the Englishman. He managed to hit the target 11 times with a 30.56% shot accuracy rate. It can be observed that the striker has taken 26 shots from inside the opposition’ penalty box. He is also a good poacher and has attempted six shots from inside the 6-yard box. The overall xG rate of the player in the season was 6.70. 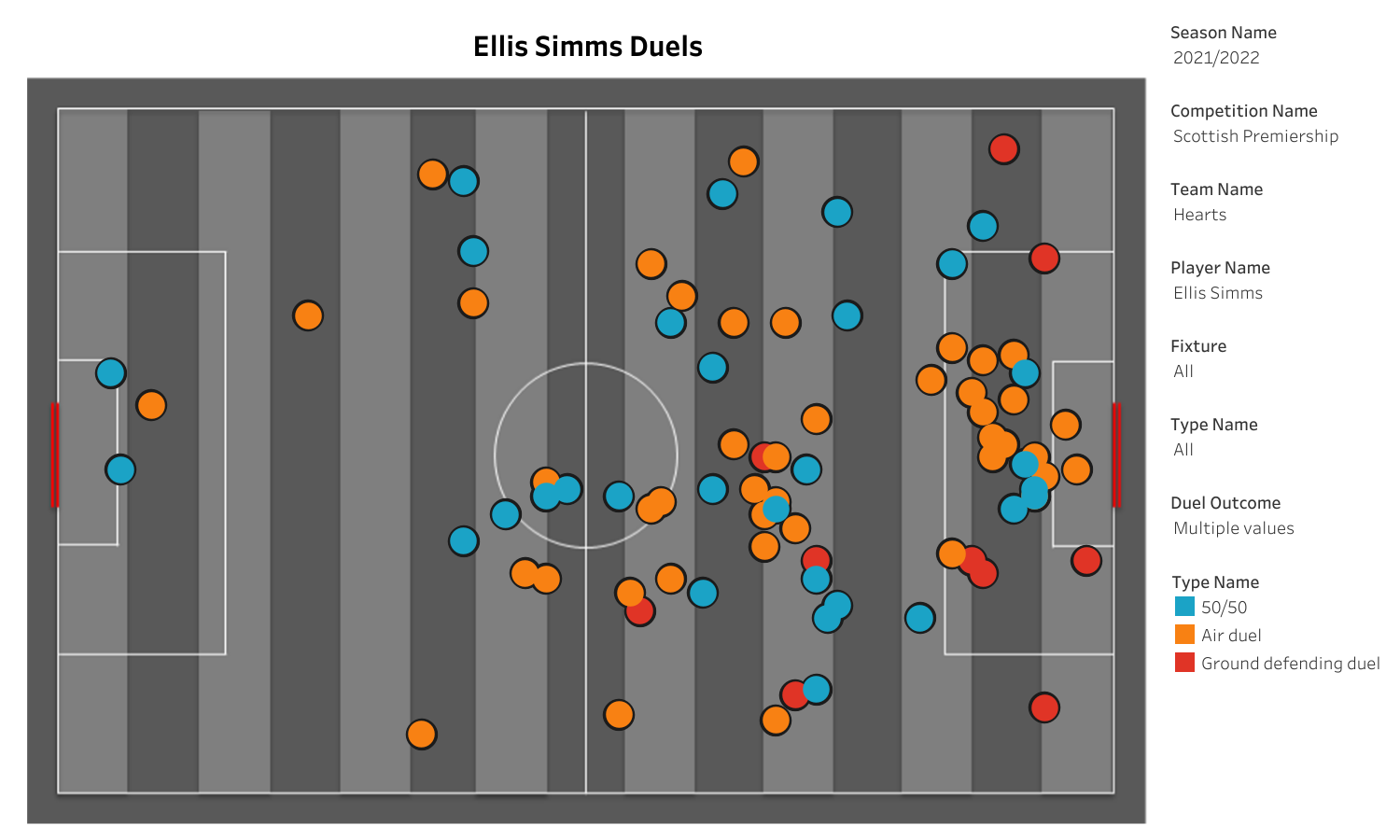 Simms is strong in the air and averaged 0.44 headed shots per 90 minutes. The above viz shows all the duels that were won by the centre-forward or the duels that ended in a neutral result. The 21-year-old won 15 aerial duels inside the opposition’s penalty box. Most of the duels won by the player were aerial duels, followed by loose ball duels. He is a threat in the air and isn’t afraid to contest a duel or two. The player also made 18 interceptions and 26 recoveries.

Simms has struggled with his passing and averaged around 13 passes per 90 minutes. This is below average when we look at the other strikers in the league. He needs to improve his link-up play and provide an assist or so.

The centre-forward is likely to go on another loan spell from the Goodison Park. In case Everton get the right price for the youngster, they might sell him. Hearts are leading the race to sign him, but Rangers have also shown their interest. The player will look for regular game-time and might opt to play in some other leagues. However, he is adjusted to the style of football that Hearts play, and they should sign him to challenge for the league title.