Rangers are at the risk of losing their third first-team player this season. Midfielder Joe Aribo signed for English Premier League side Southampton, and defender Calvin Bassey was signed by Ajax. Their third most wanted player is the Finnish international, Glen Kamara. Rangers were able to hold on to the midfielder last season, but this time, he could be on his way away from the Scottish Premiership. English Premier League side, Brighton have shown their interest in the player, along with Turkish giants, Galatasaray. The 26-year-old showed a lot of improvement last season by getting involved in attacking plays. Last season, Kamara played the most productive season of his career, in which he scored four goals and provided five assists. The player likes to get involved in the play, and some of the stats show why the midfielder is gaining the attention of other clubs.

Glen Kamara made 50 appearances for Rangers in all competitions. He featured in 31 league games in the Scottish Premiership and was able to score three goals. He also created three goals for his teammates. 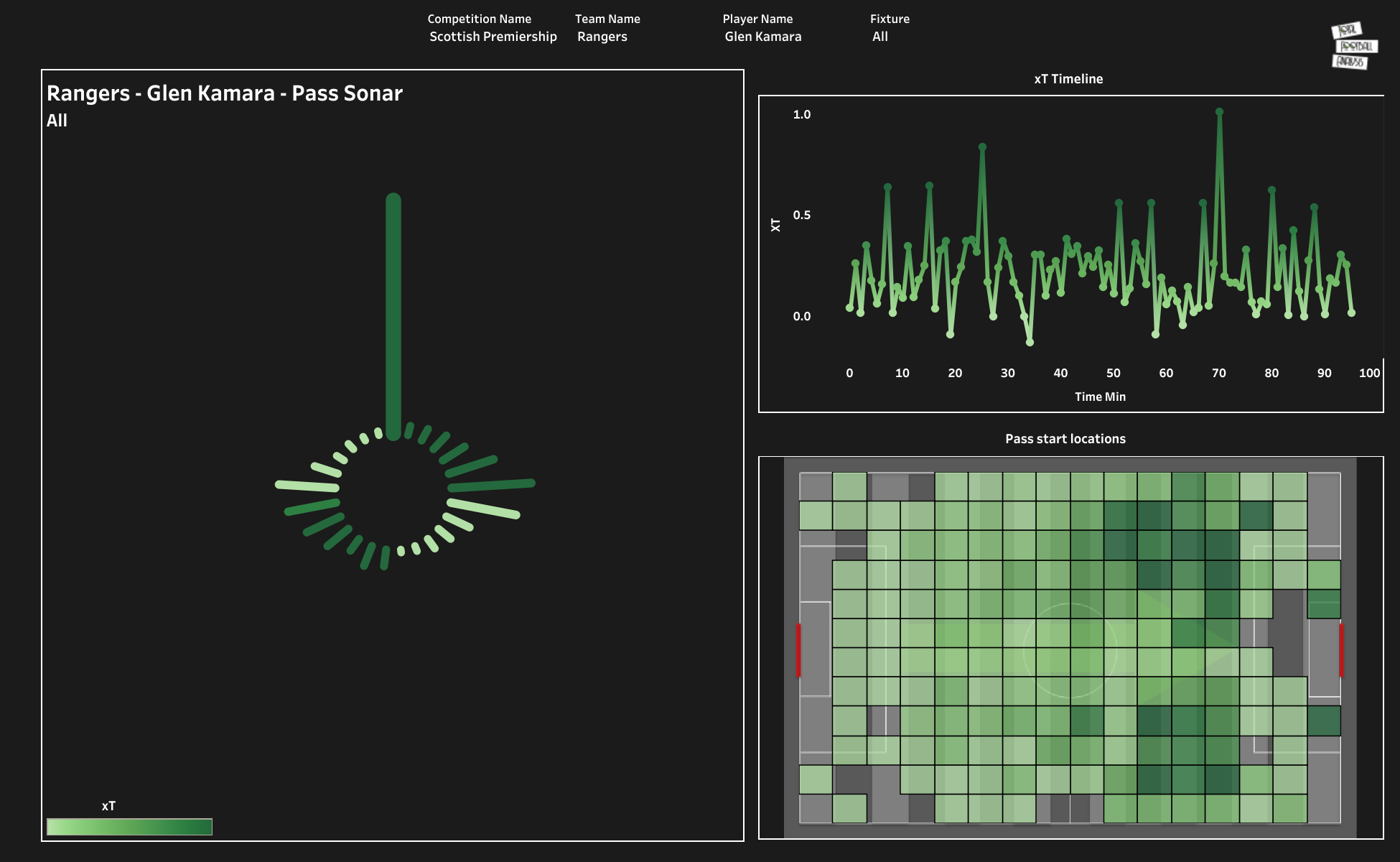 The above viz shows the pass start location and the threat created from passes at different time intervals. Glen Kamara used to play a deeper role in the 2020/21 season, but last season, he was given a new role, in which he was used in a more attacking role. The pass start location map shows that Kamara attempted most of the threat-creating passes from the attacking third. He averaged 8.7 passes into the attacking third per 90 minutes with a very high accuracy rate of 92.77%. This was the main reason why he was able to provide more assists which improved his stats. 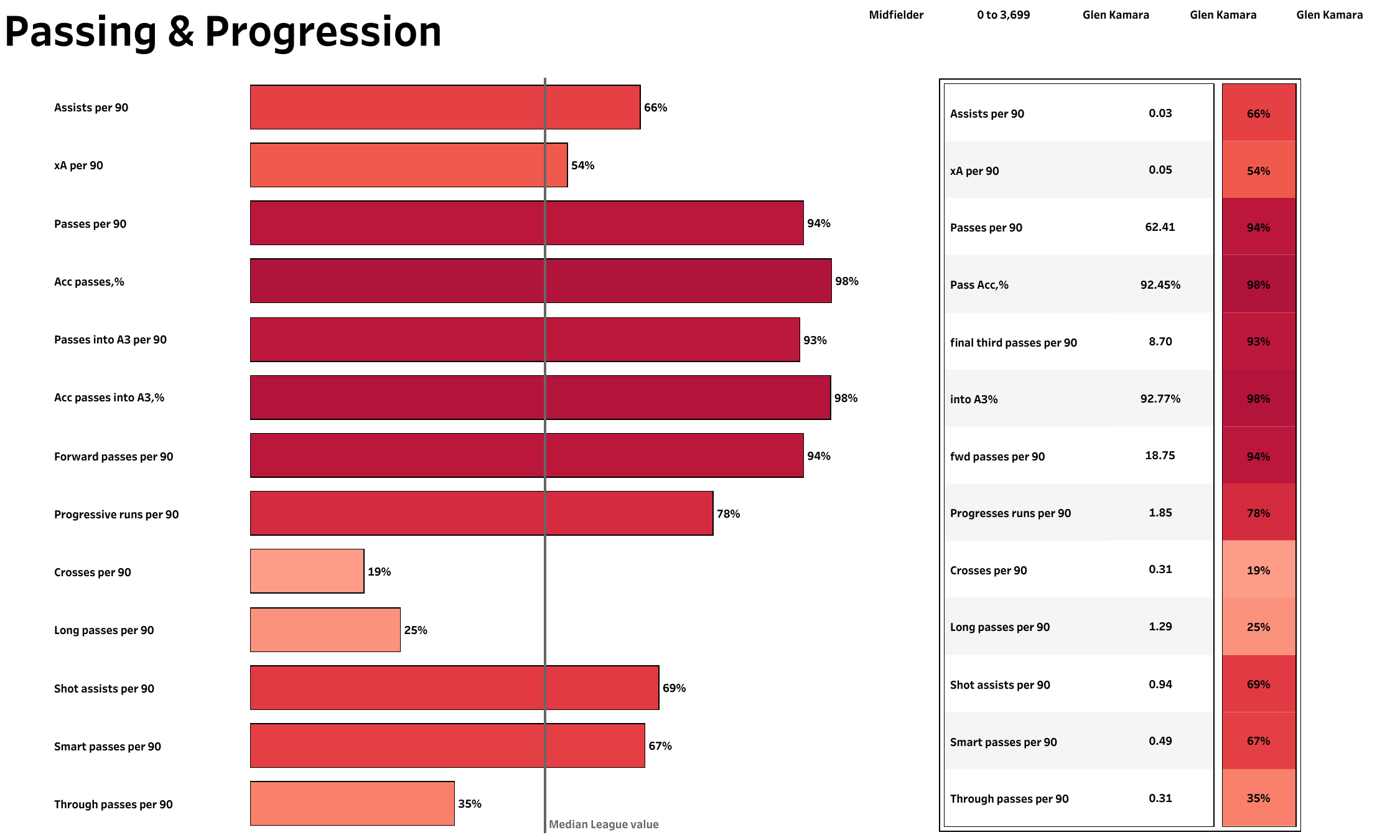 The above viz shows the passing and progression stats from the Scottish Premiership 2021/22 season. When looking at the above chart, the general rule is that the longer the bar, the better the performance — you can see the league average in the middle, and the % is the percentile rank the player is in. Kamara averaged 62.4 passes per 90 minutes with an accuracy rate of 92.45%. He attempted simple passes to keep hold of the ball and distributed the ball towards the flanks to stretch the play. Most of the passes were attempted towards the right-back, James Tavernier, followed by Connor Goldson (centre-back) and Borna Barisic (left-back). 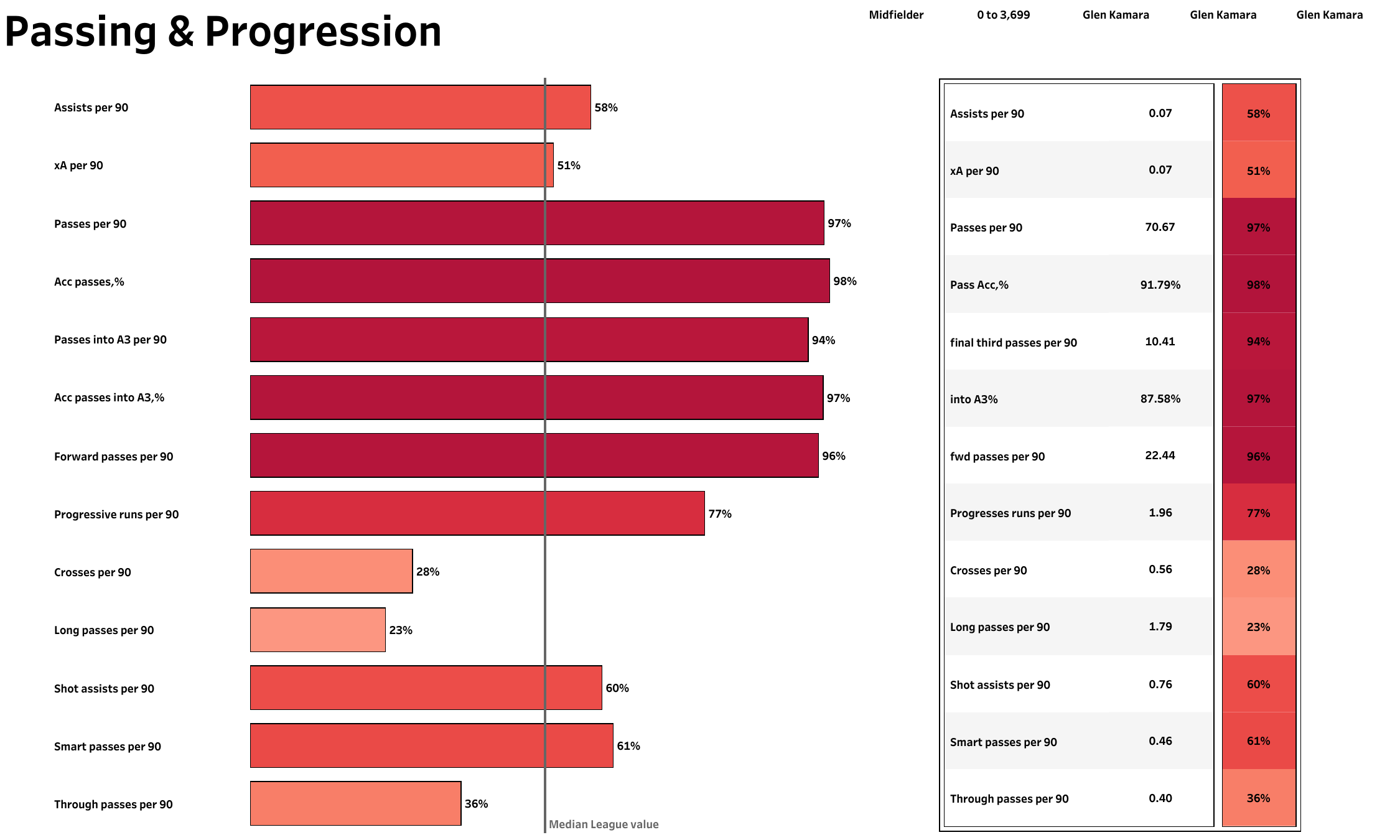 The above viz shows the stats of the 2020/21 season. Kamara had a high average of passes attempted per 90 minutes. The passes attempted into the attacking third were more, as Kamara played a deeper role. The other stats were almost similar in both seasons.

Kamara attempted 14 shots, and three shots on target were converted into goals. In the 2020/21 season, he attempted 11 shots and converted one of the three chances on target. He had more success in attacking actions in the previous season. This change in role has helped Glen Kamara to improve his game, and this is the main reason why teams are after him. Rangers will only sell the player if they are paid a large sum of money. They will try their best to keep hold of the midfielder.