After a successful season with Fleetwood Town, League One Young Player of the Season, Paddy Lane, could be on the move to the Scottish Premiership. Hearts have emerged as one of the teams who are after the 21-year-old striker. He became a Northern Ireland international after impressing the international manager last season. Hearts will be competing in the UEFA Conference League and need players for a lengthy season. They have been one of the active teams in the Scottish transfer window. Paddy Lane escaped relegation with Fleetwood Town, and he will be looking for a move away in the summer following a successful season. 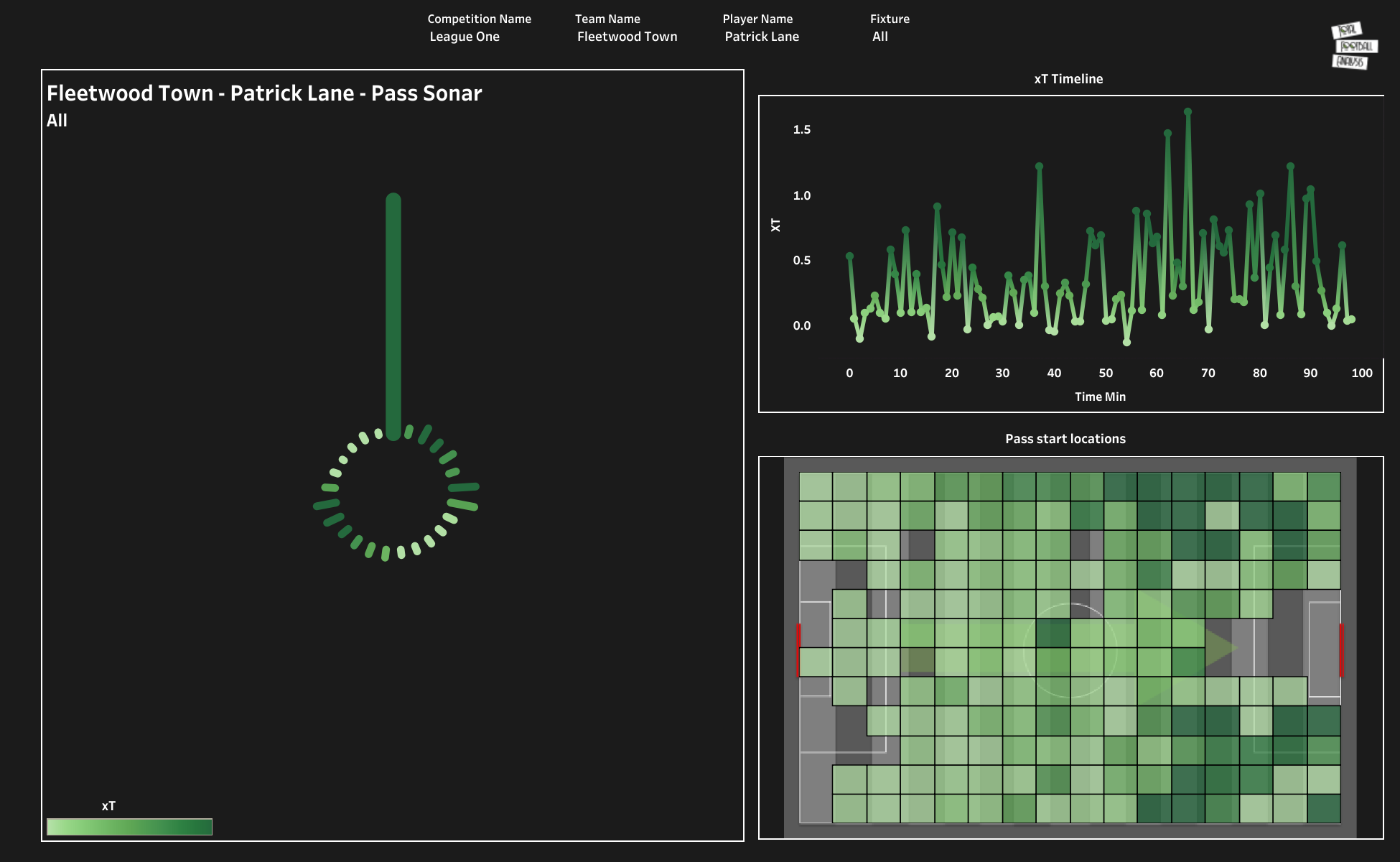 Lane made 38 appearances for Fleetwood Town in all competitions. He made 27 appearances in the league and started in 20 matches. The forward scored five goals and provided eight assists to his teammates. The above viz shows the pass start location and the threat created at different time intervals from passes. By looking at the pass start location chart, we can observe that the player operated on both the wings for his side. He covered a lot of areas on the pitch and was also involved in a few defensive actions. This shows that the 21-year-old had a very high work rate last season. Most of the threats were created from passes attempted from the attacking third. The xT timeline shows that the forward created more threats from passes after the 60th-minute mark. He was very effective in the last phase of the matches. 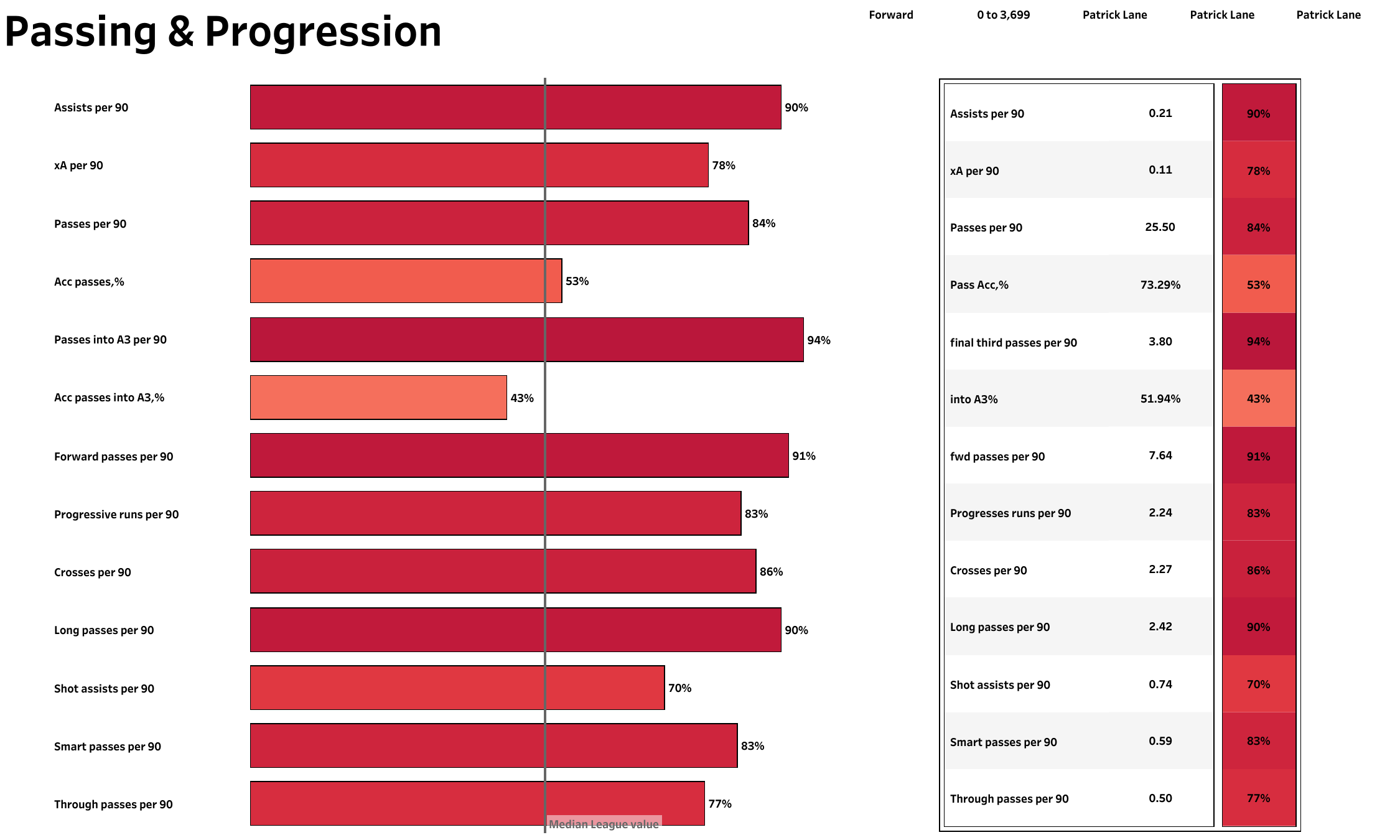 When looking at the above chart, the general rule is that the longer the bar, the better the performance — you can see the league average in the middle, and the % is the percentile rank the player is in. The above viz shows the passing stats of Lane in comparison to other forwards in the league. With an accuracy rate of 73.29%, the player attempted 25.5 passes per 90 minutes. Lane had a very high percentile rank for attempting passes into the attacking third, making forward passes and crosses per 90 minutes. These passes were attempted from both sides of the field, and this shows that the player can create a lot of threats with the ball at his feet. 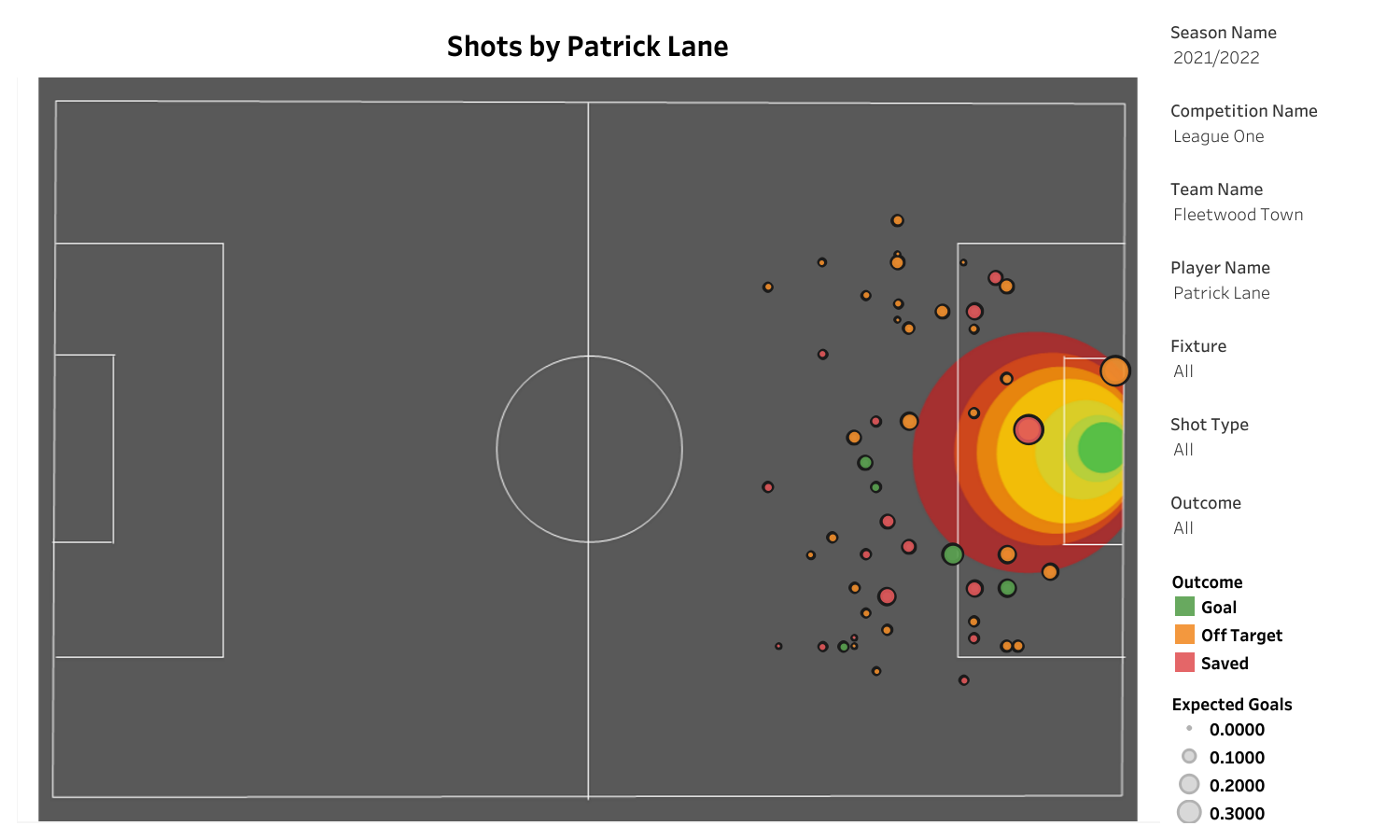 Lane was involved in 8.75 attacking actions per 90 minutes with a 51.18% success rate. He attempted 52 shots in the competition with a 38.46% shot accuracy rate. Lane attempted most of the shots whenever he was featured from the right side. The forward scored two goals from inside the opposition’s penalty box and three goals from outside the box. This shows that the player can score long-range goals and could prove to be a real threat towards the opposition goal.

As mentioned earlier, the player covered a lot of areas on the pitch and also dropped a lot to help his side to defend. The forward was involved in 9.26 defensive actions per 90 minutes and had a success rate of 73.9%. He averaged 3.18 interceptions and 4.92 recoveries per 90 minutes.

Fleetwood Town’s Paddy Lane contributed a lot last year and helped them escape relegation. His efforts were noticed by the other clubs, and this is the reason why he is on the radar of Hearts. The youngster could end up playing in the Scottish Premiership next season if Hearts manage to acquire his services.