Adam Montgomery was promoted to the first team by Celtic in 2021. The 19-year-old forward started last season with Celtic but ended up playing for Aberdeen on a loan spell in the second half of the season. For a season-long loan spell, Scottish Premiership side St. Johnstone have acquired the services of the youngster. The player needs minutes on the pitch to groom, and he could get a lot of opportunities for St. Johnstone, who struggled in the league last season. 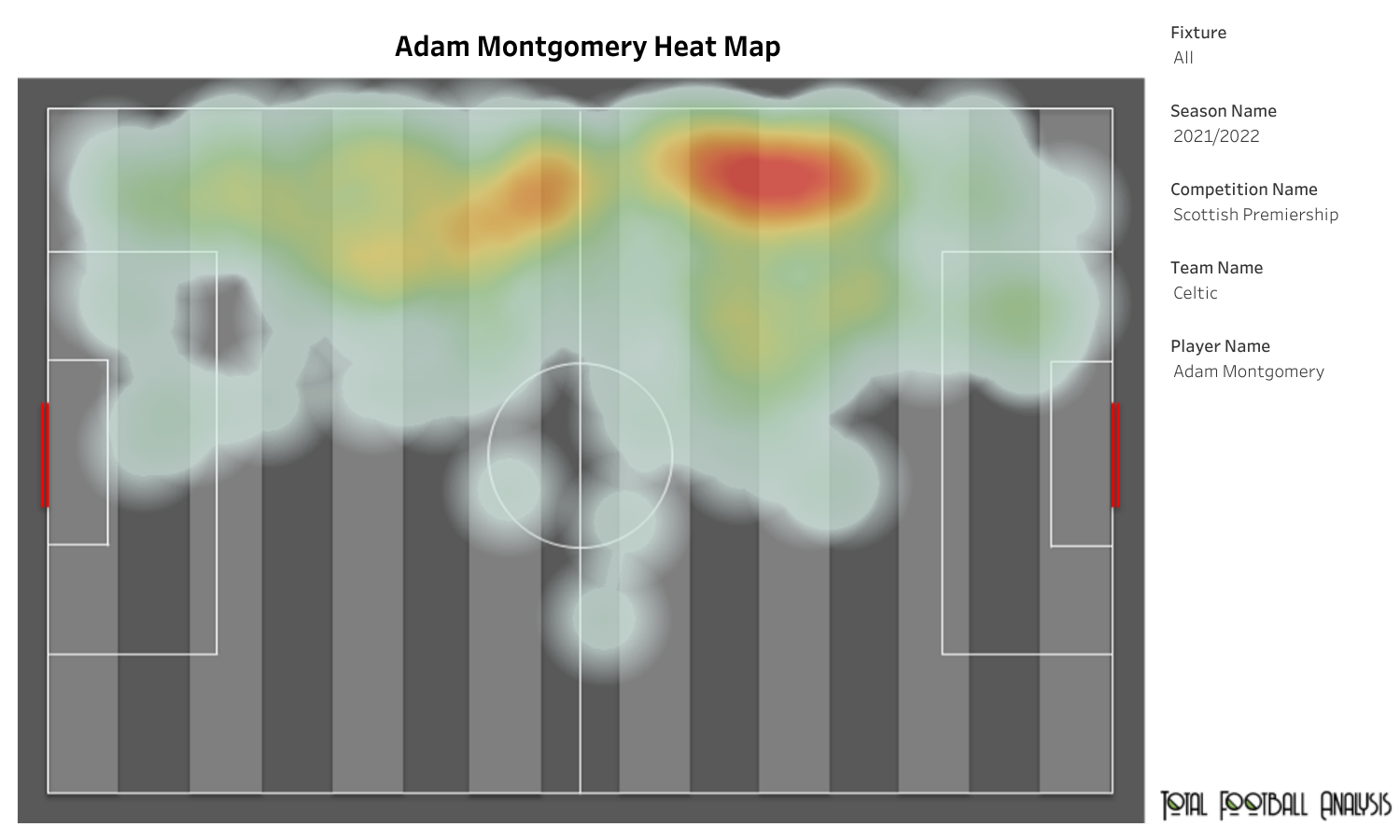 The 19-year-old made eight appearances for Celtic last season. Overall, he made 27 appearances in all competitions and managed to provide two assists. The forward failed to score a goal for Celtic and Aberdeen. In his short loan spell at the Dons, Montgomery made six appearances, and these included two starts. He featured on the left for both teams. He palyed as a left forward and made a lot of runs up and down the field. The above heat map is from his short spell at Celtic, where he managed to get eight touches inside the opposition’s penalty box with an average of 1.5 touches per 90 minutes. By looking at his average position last season, we can say that St. Johnstone might also use the forward in the same position. 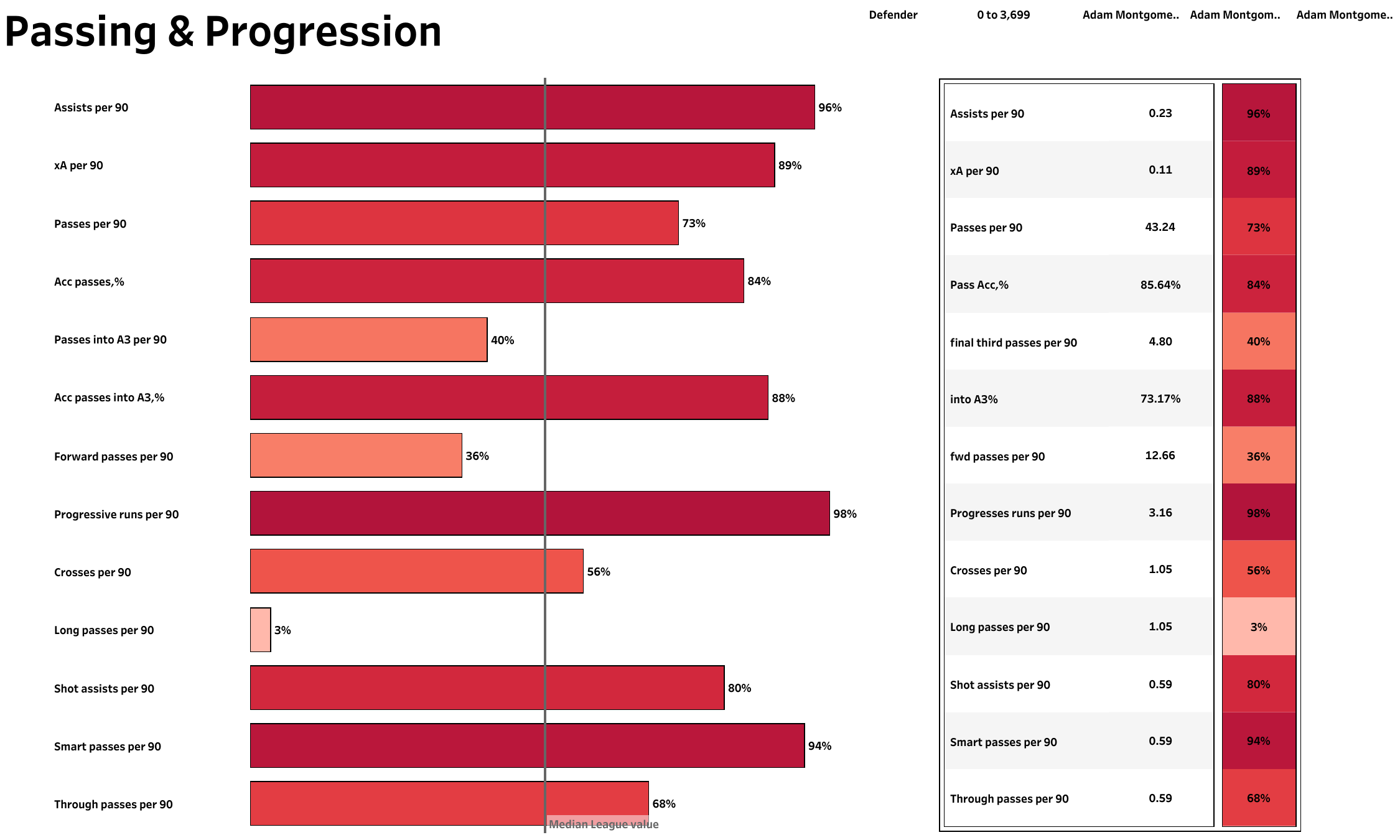 When looking at the above chart, the general rule is that the longer the bar, the better the performance — you can see the league average in the middle, and the % is the percentile rank the player is in. Montgomery attempted 43.2 passes per 90 minutes with a high accuracy rate of 85.64%. The player also showed versatility and featured as a left wing-back on the team. The above chart shows that the player created a lot of threats with the ball at his feet. Other than this, he made more than three progressive runs per 90 minutes and had a high percentile rank for attempting smart passes. This shows that Montgomery can pass the ball easily and create chances for his teammates. 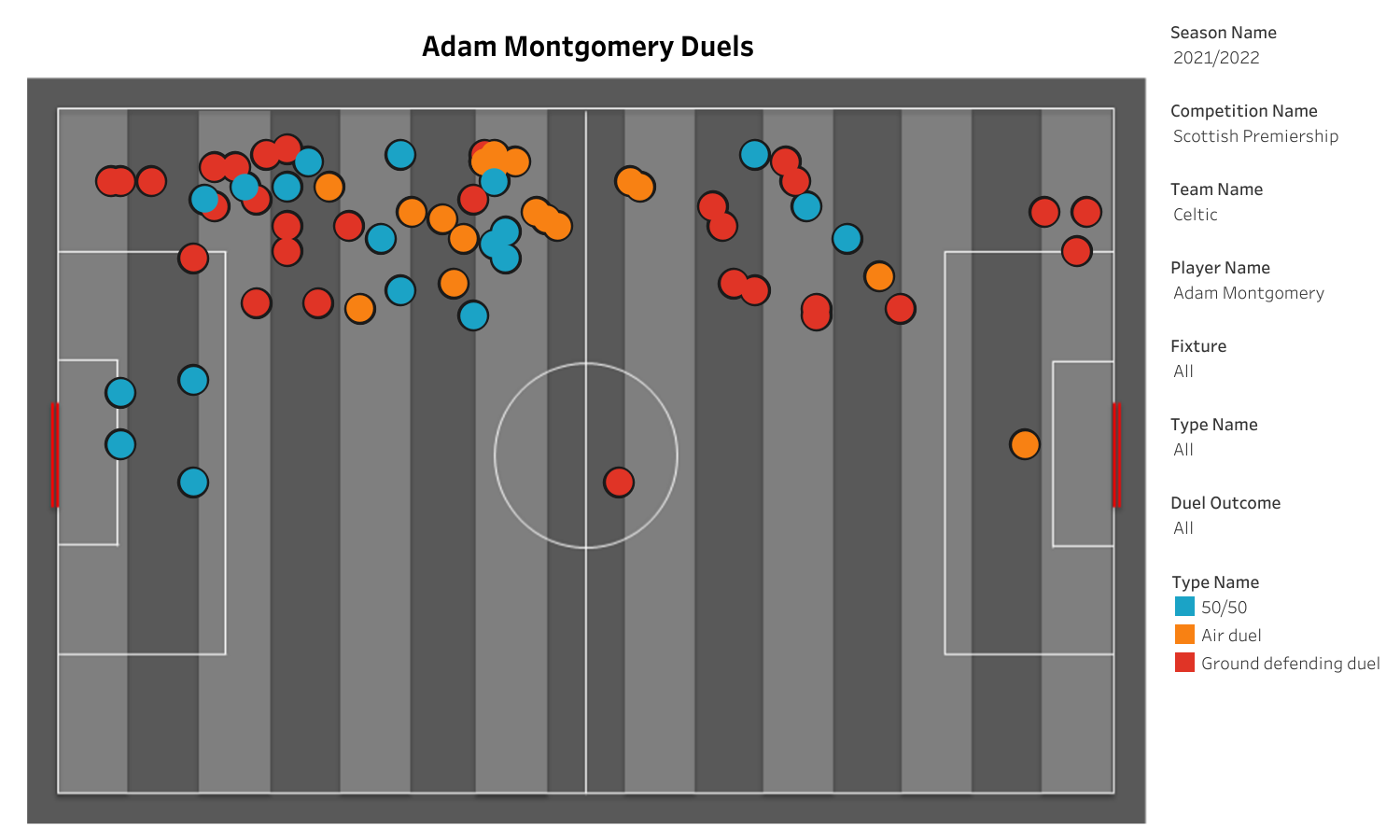 Montgomery was involved in more defensive actions during his spell at Celtic. He failed to attempt a shot for the Scottish Premiership winners. The players contested 6.45 defensive duels, 3.87 aerial duels, and 3.87 loose ball duels per 90 minutes. He won 21.8% of defensive duels, 42.42% of aerial duels, and 42.42% of loose ball duels. Other than this, he averaged around four interceptions per 90 minutes. The 19-year-old made 9.14 recoveries per 90, and 3.16 of them were made inside the opposition’s half. This demonstrates that the player can contribute both offensively and defensively.

The youngster will look to gain more playing time and establish himself as a regular for St. Johnstone. He can create chances for his teammates and would like to add goals to his account. Celtic will be hoping that the youngster comes home with a lot of experience.