After a successful campaign in the Scottish Premiership in the 2021/22 season, Hearts are looking for more room for improvement. They finished third in the league table, behind Celtic and Rangers. Next season, Hearts will play in the UEFA Conference League and will require players who could add to the depth of the team. They have already signed three players and could confirm their fourth signing in the form of Peterborough United’s midfielder, Jorge Grant. The 27-year-old midfielder completed a move to the EFL Championship from League One side, Lincoln City at the start of last season. He was not a regular in Peterborough United’s squad, but his performances were decent, and he could end up playing in the Scottish Premiership next season. 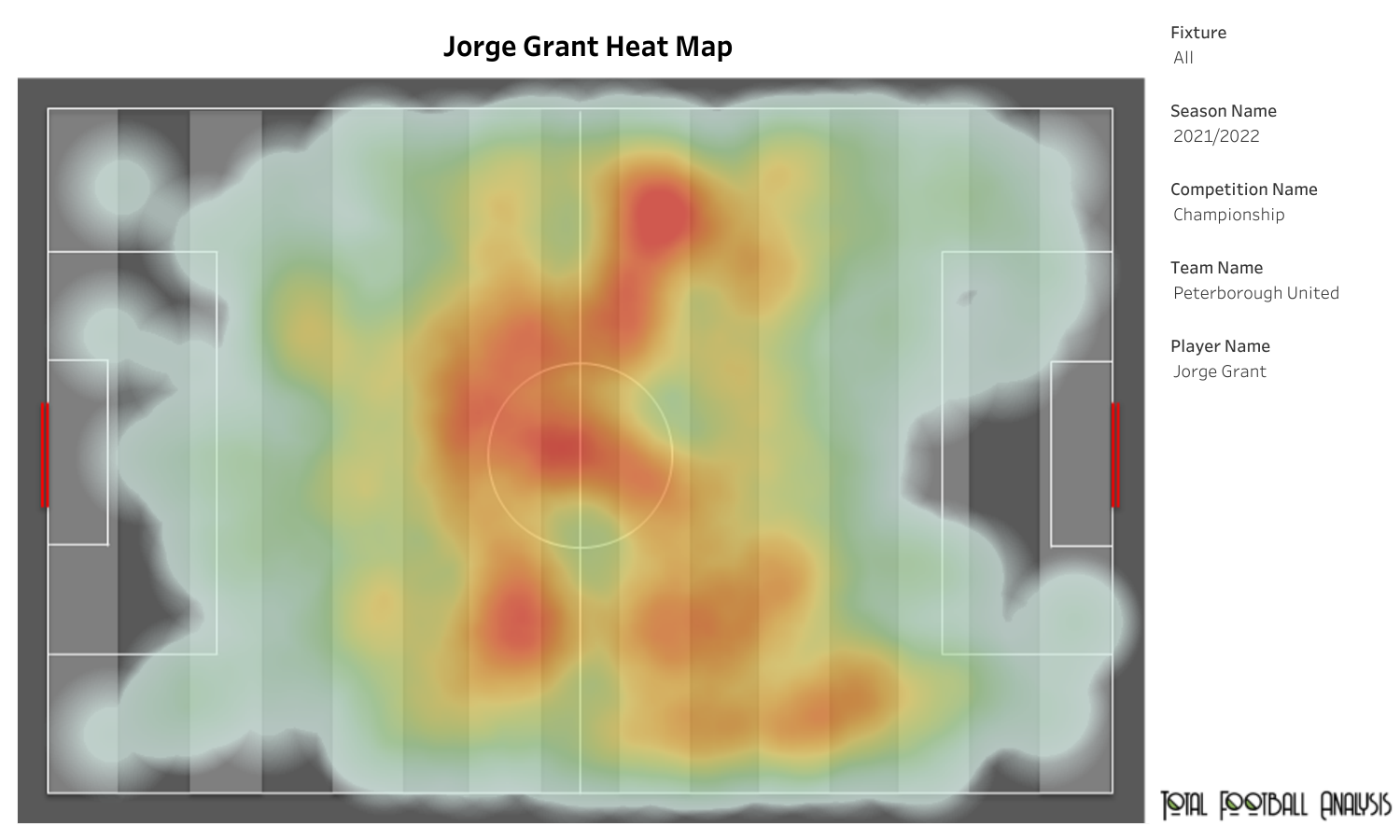 The central midfielder made 26 appearances in the league, and five of them came off the bench. Grant scored two goals and provided the same number of assists in the league. The above viz shows the heat map of the 27-year-old. He is a box-to-box midfielder who likes to make forward runs and go wide on occasions to link-up play with his teammates. 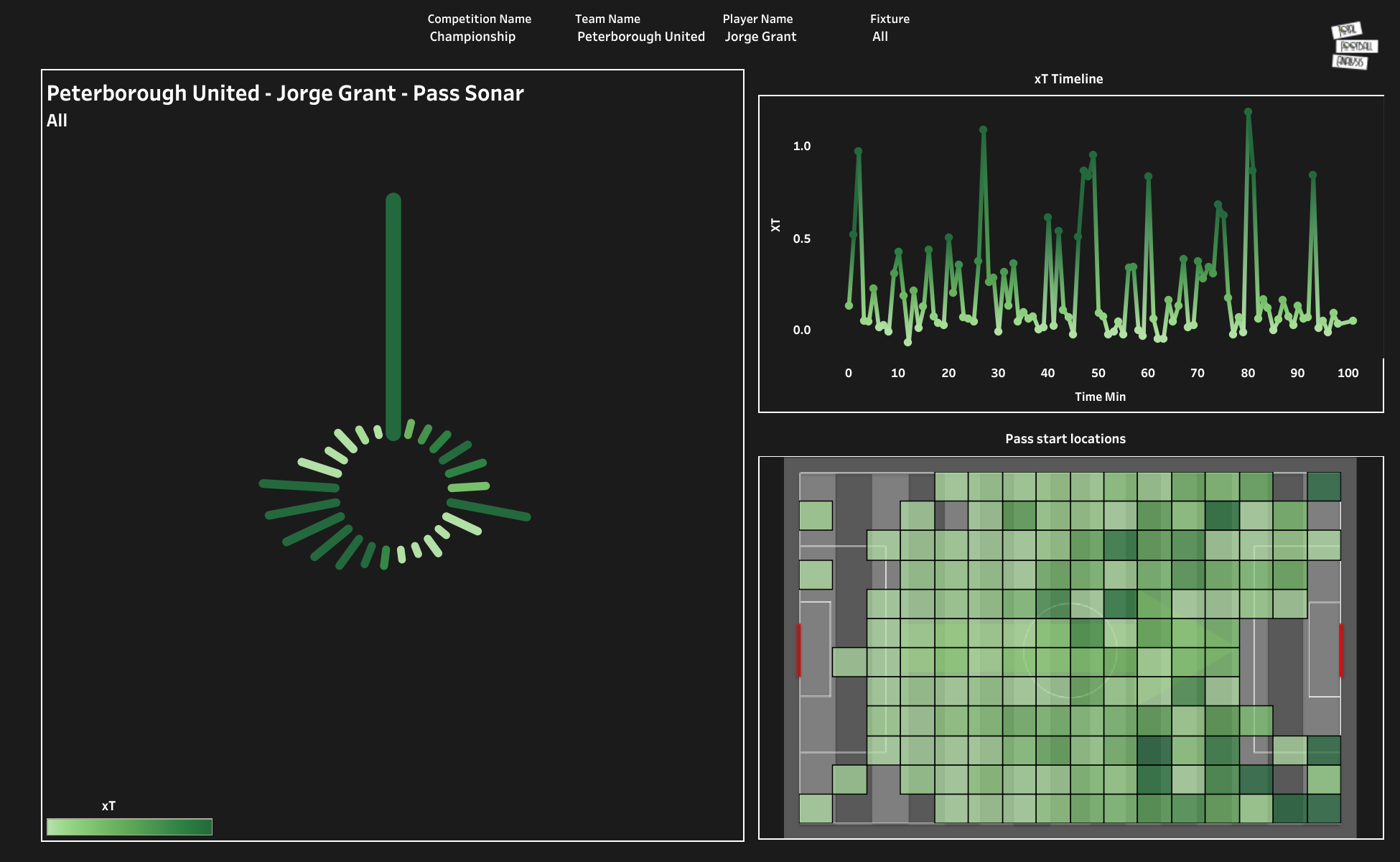 The above viz shows the pass start location as well as the threat created from passes at different time intervals. Grant averaged 37.37 passes per 90 minutes with an accuracy rate of 83.29%. He averaged 5.33 passes into the opposition’s final third with an accuracy rate of 78.18%. By looking at the pass start location, we can observe that Grant attempted most of the threat-creating passes from the right side of the play. His passes were more effective in the second half when compared to the first.

The 27-year-old was involved in 4.59 attacking actions per 90 minutes with a success rate of 42.11%. He averaged 0.87 touches inside the opposition’s penalty box, and this shows that the player used to make one or two runs inside the opposition’s penalty box almost every match. Grant also contested 5.56 offensive duels per 90 minutes and had a success rate of over 50%. He made decent contributions in attack and found spaces for him to attempt shots towards the opposition goal. 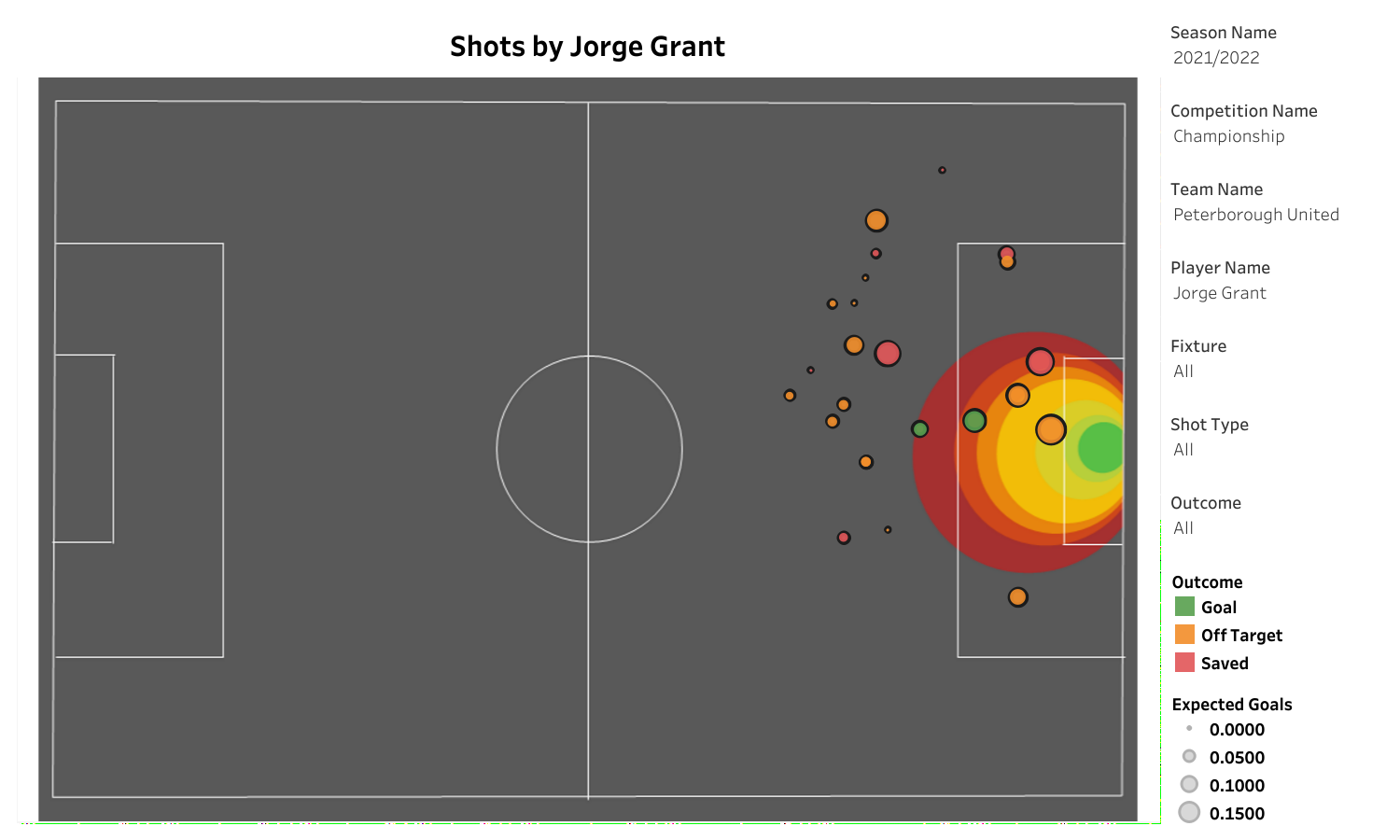 Grant played as a left-sided central midfielder in the league. He attempted 24 shots with a shot accuracy rate of 33.33%. The midfielder attempted seven shots from inside the opposition’s penalty box, with three being on target. Grant favours shooting from the left side of the field and is not shy of attempting shots from outside the penalty box.

The midfielder also made a few defensive contributions for Peterborough United. He made 58 interceptions and averaged more than two interceptions per match. Other than this, the player made 113 recoveries, and 57 were made inside the opposition’s half.

Jorge Grant could provide stability to Hearts’ midfield and add more depth to the squad. He can cover a lot of areas on the field and help his team in defence as well as in attack. The midfielder could become a regular in the squad.