Calvin Ramsay made a move from Scottish Premiership side Aberdeen to English Premier League giants, Liverpool. The Dons are now looking for a replacement for their talented young right-back. They have identified Tranmere Rovers’ right-back, Josh Dacres-Cogley, as the perfect replacement for Calvin Ramsey. Tranmere signed the 26-year-old full-back from Blackburn Rovers towards the start of last season. He was a regular in the squad and missed only one match in the EFL League Two. Josh Cogley scored a goal for his new side and also provided four assists in a long season. Aberdeen earned a few million from Calvin Ramsay’s transfer and will look to invest in the best possible way. 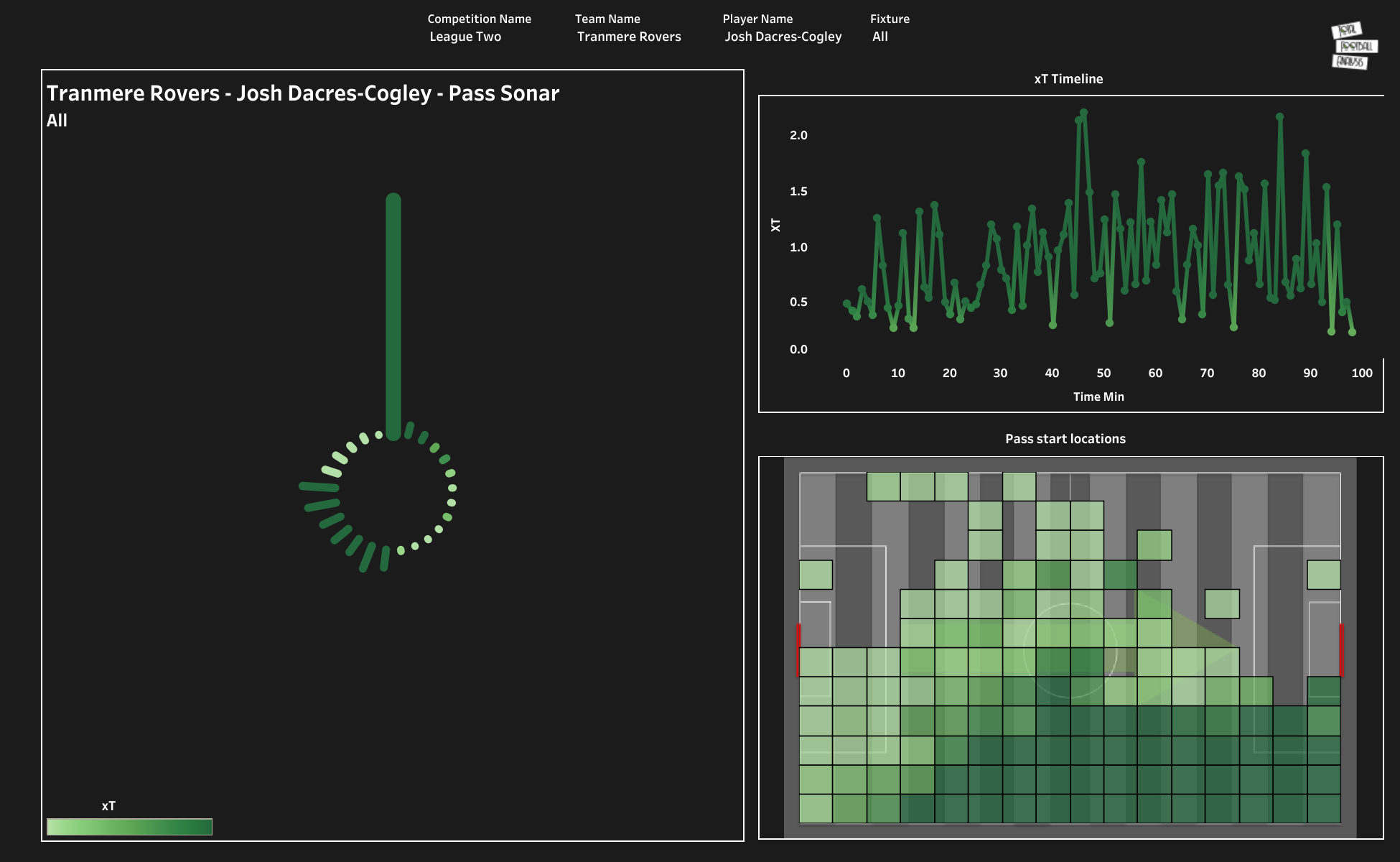 Dacres-Cogley made 45 starts for Tranmere last season and was a regular in the squad after getting released by Blackburn Rovers. He helped his side keep 20 clean sheets. The above viz shows the pass start location as well as the threat created from passes at different time intervals. It can be observed that the full-back made a lot of forward runs and often penetrated the opposition’s penalty box. He didn’t play a wide line but often tried to cut inside and play more towards the centre. The xT timeline shows that Dacres-Cogley created more threats in the second half with his passes. He was very effective during the last stages of the match. 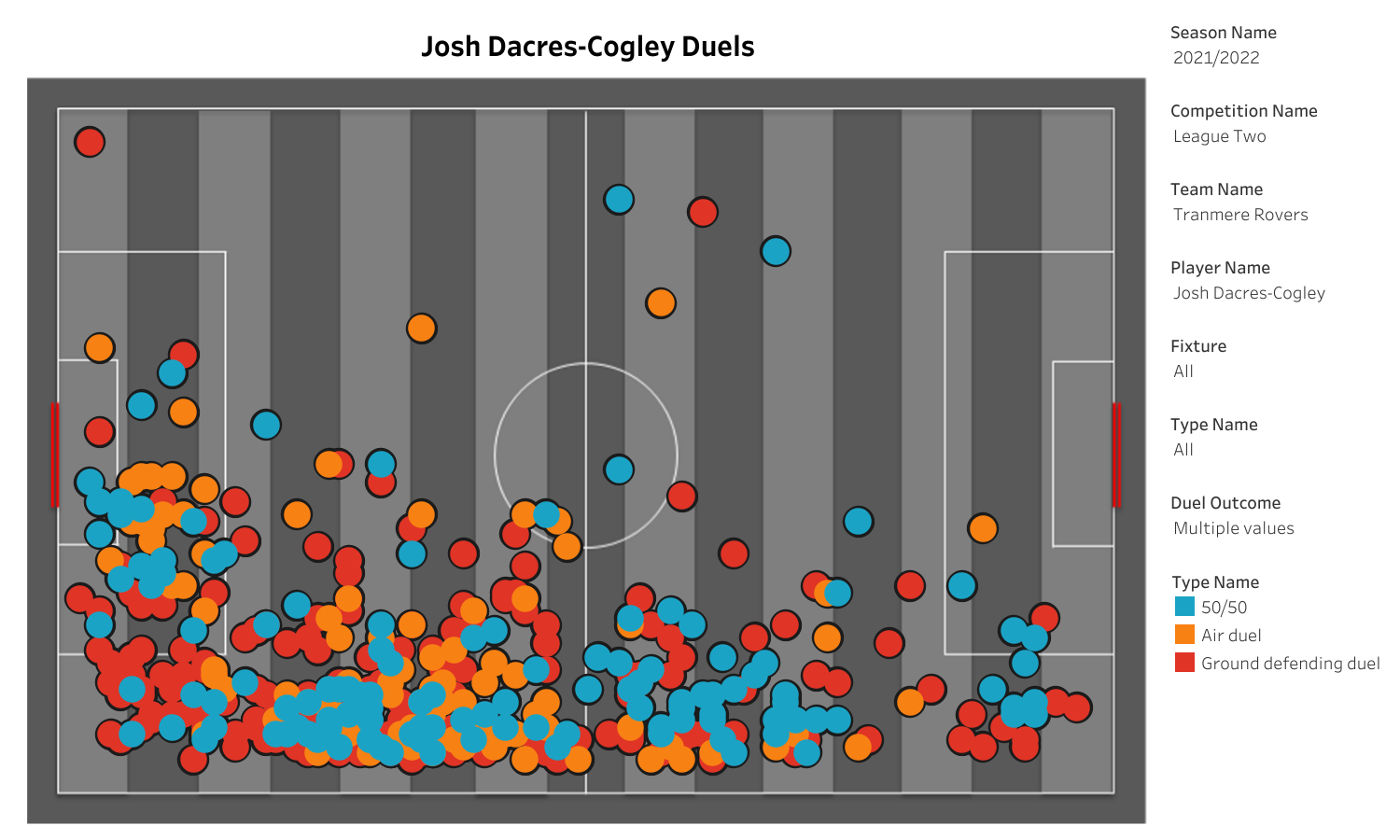 Dacres-Cogley was involved in 11.88 defensive actions per 90 minutes and had a success rate of 80.65%. The above viz shows all the duels that were won by the defender or the duels that ended in a neutral result. Dacres-Cogley averaged 7.2 defensive duels, 3.99 aerial duels, and 3.7 loose ball duels per 90 minutes. He had a win rate of 22.32% for defensive duels, 45.92% for aerial duels, and 42.86% for loose ball duels. From the above viz, it can be observed that the right-back won most of the aerial and loose ball duels in the middle third. 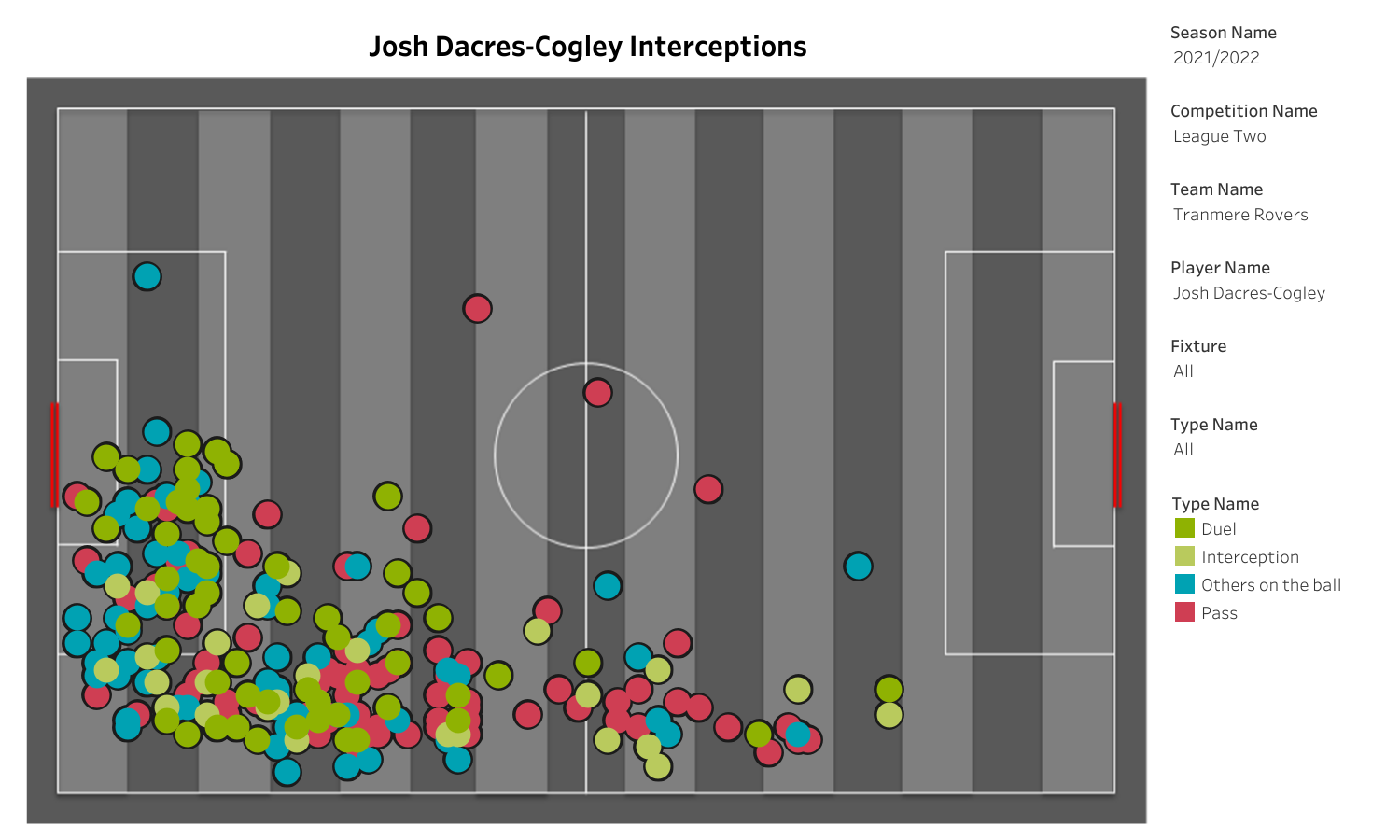 The 26-year-old also averaged 4.6 interceptions per 90 minutes, and most of them were made in the defensive third. From the above viz, it can be observed that most of the interceptions were made while other players were on the ball, and the full-back also intercepted a few passes in the middle third to stop the opposition players from attacking. Dacres-Cogley made some crucial recoveries and averaged 9.95 recoveries per 90 minutes. Of these 9.95 recoveries, 2.64 were made inside the opposition’s half per 90 minutes. The player also averaged less than a foul per 90 minutes and only received four yellow cards throughout the season. Though he lost a few duels, the player was very disciplined with his defending and didn’t give away silly free-kicks.

Josh Dacres-Cogley could be on the move to the Scottish Premiership. Aberdeen will look to fill in the vacant right-back spot as soon as possible. They could get Tranmere Rovers’ right-back at a lower price as the Dons look like the only team after the full-back.