Hibernian are all set to visit the Tynecastle Stadium to face in-form Hearts for their next fixture of the Scottish Premiership. Both teams played out a 1-1 draw in their previous league fixtures.

Hearts have been impressive lately and are unbeaten in their last six games. They’ve won four and drawn two of those six games. Hearts have been one of the best home teams in the Premiership. They’ve played 16 home games, winning 10 of them, losing just three times, with two of those losses coming against Celtic and Rangers. Hearts have a tally of 54 points from 32 games, having won 15 matches. They have been comfortable in the third position for a long time now and have a 14-point gap between fourth-placed Dundee United. Hearts managed to hold off in-form Ross County in their previous Scottish Premiership fixture. Ross County took the lead in the first half through Alex Iacovitti’s goal, but Hearts drew level seven minutes later, thanks to an equaliser from Barry McKay. The xT timeline indicates that Hearts created better chances in the first half, but it was Ross County who were better in the second half. Hearts did well to keep the scoreline to 1-1 and secured a point from the game.

In the above visual, we can see the shots taken by Hearts this season. In comparison to their opponents in the upcoming fixtures, Hearts have found more success with their shots from outside the box. Liam Boyce remains the top scorer for his side, with nine goals while also boasting the highest xG and shots taken. He has attempted 58 shots on goal and has generated an overall xG of 12.210.

Hibs have not enjoyed the best of form recently as they’ve won just one of their last six games, with four draws and a loss. Shaun Maloney’s men played 15 games away from home, and they won just three of them. The Hibs have won only nine games this season from the 32 games they have played and have 38 points. The visitors went down to a Ross Graham goal in the 10th minute, but Harry Clarke managed to score an equaliser late in the first half. 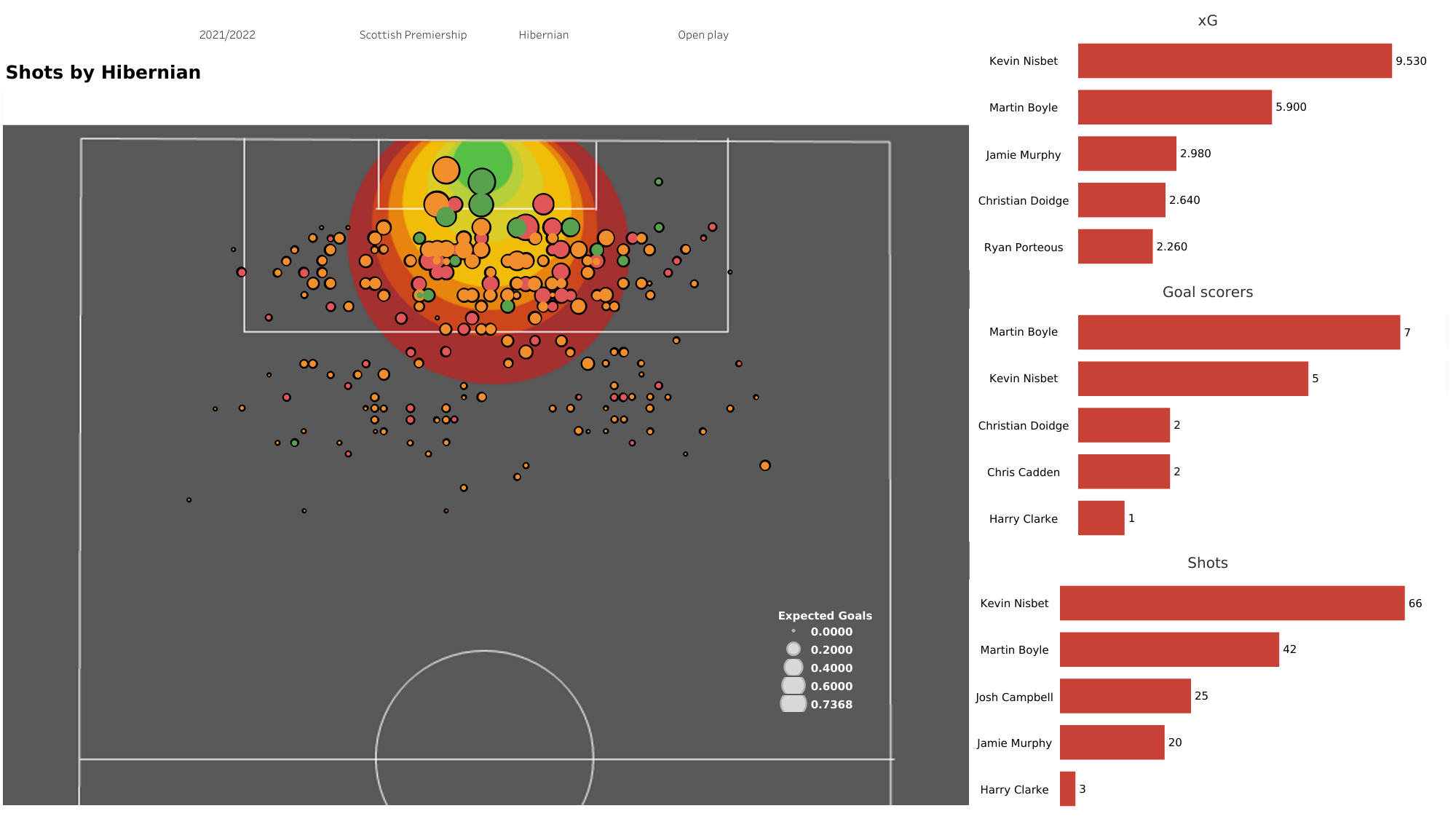 Kevin Nisbet leads the xG chart for his side with an xG of 9.530 and has also taken the most shots. But the striker was ruled out for the rest of the season after a knee injury in March. Martin Boyle is still the top scorer for the Hibs with seven goals, followed by Nisbet with five. In the above visual, we can also see the location of shots taken by Hibernian this season. They have had very little success in their shots from outside the penalty area.

Both teams have done well defensively in the league and have not conceded many goals in their recent fixtures. But it is Hearts who have been better in the final third and should be able to secure all three points when the two sides meet on Saturday.