Hibernian are set to take on Hearts on Tuesday at Easter Road in the Scottish Premiership. The visitors have a 12-point advantage over the home side although, they are just one place apart in the league table. Can Hibs reduce the point gap?

Hibernian’s start to the new year has not gone well. Although they did manage to secure a victory in the Scottish Cup, they remain winless in their three games in the Scottish Premiership following the end of winter break. They are placed at the fifth spot in the league, with eight wins, six draws, and nine losses in 23 matches. The Hibs have won just two of their previous five fixtures in the league. Shaun Maloney’s side succumbed to a 2-3 defeat at home against Livingston, despite leading 2-1 at the break. The Hibs led at halftime via goals from Demetri Mitchell and Chris Cadden although, Ayo Obileye pulled one back for Livingston. Livingston produced a remarkable comeback in the second half through goals from Fitzwater and Forrest, handing their side the three points at the final whistle. Hibernian would be desperate for a win against Hearts as they are yet to open their account in the league since the start of the new year. Paul Hanlon and Paul McGinn are doubtful to appear in the fixture, while Harry Clarke and Kyle Magennis remain sidelined as well. 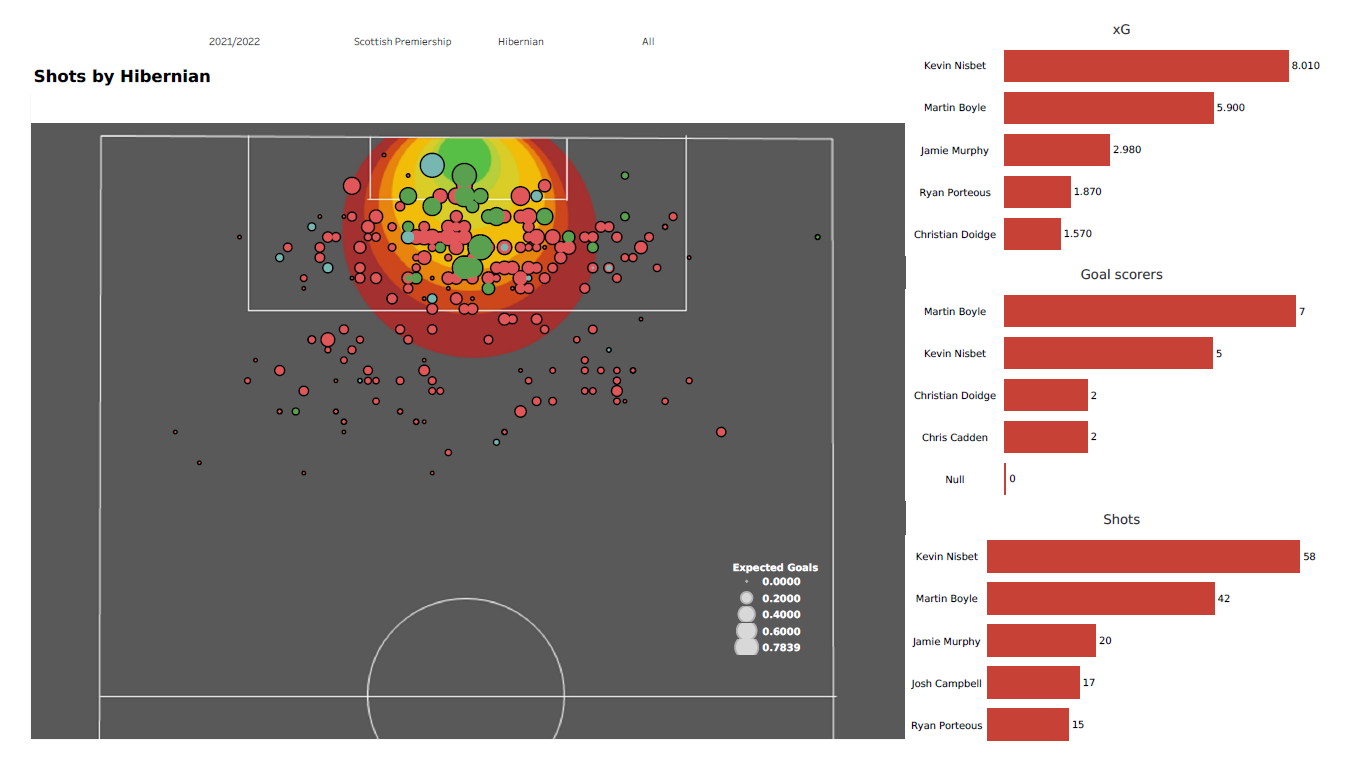 Kevin Nisbet hasn’t been in his best form recently, although he has improved in the previous games. He leads the xG chart for his side with an xG of 8.010 and has also taken the most shots. Martin Boyle is still the top scorer for the Hibs with seven goals, followed by Nisbet with five. In the above viz., we can also see the location of shots taken by Hibernian this season. They have had very little success in their shots from outside the penalty area. 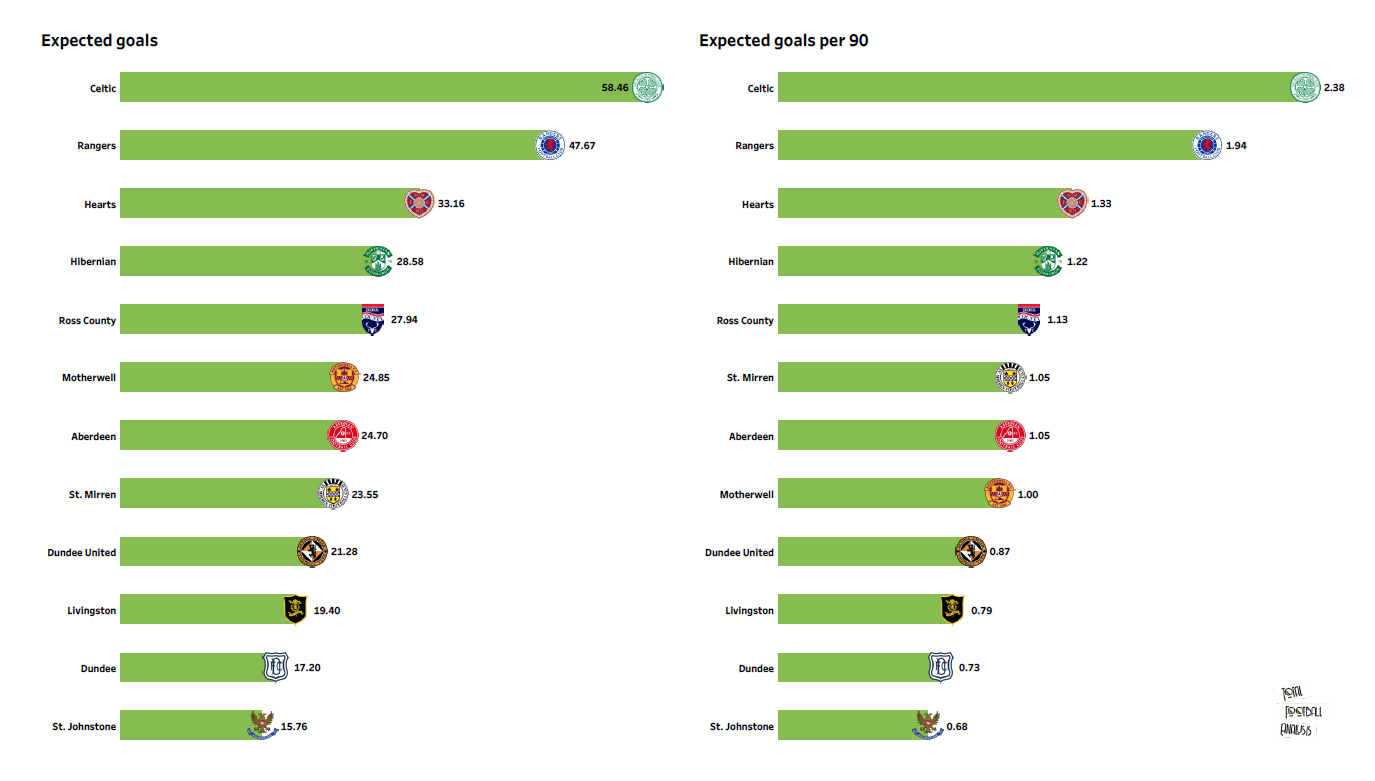 In terms of xG, Hibernian are placed fourth in the league with an xG of 28.58. The Hibs have an average xG of 1.22 per match.

Hearts have started off the new year in decent form with three wins in four games. The Jambos secured an impressive 5-0 victory in their Scottish Cup fixture, although they failed to take three points at home against Celtic. Hearts arrive in this match on the back of a 2-0 victory against fourth-placed Motherwell. They are placed at the third spot in the league with 12 wins, six draws, and five losses in 23 games. Their recent victory means that the Jambos have extended the point gap to 10 over Motherwell. Halliday opened the scoring for his side in the 37th minute to give Hearts a one-goal advantage at halftime. Simms found the net in the second half to make the score-line 2-0 as the Hearts claimed the three points at the final whistle. Both Michael Smith and Craig Halkett are set to miss out on the fixture against Hibernian due to injury concerns. 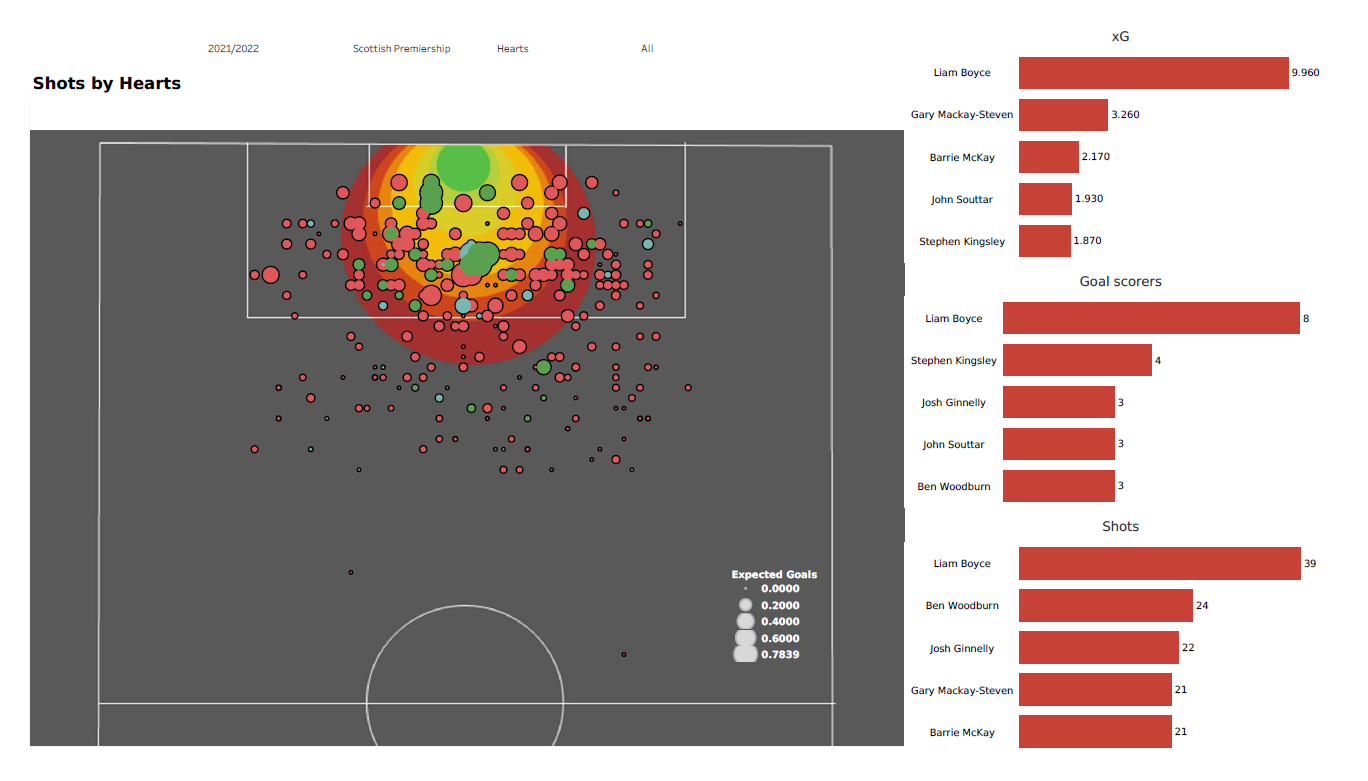 In the above viz., we can see the shots taken by Hearts this season. In comparison to their opponents in the upcoming fixtures, Hearts have found more success with their shots from outside the box. Liam Boyce remains the top scorer for his side, with eight goals while also boasting the highest xG and shots taken. 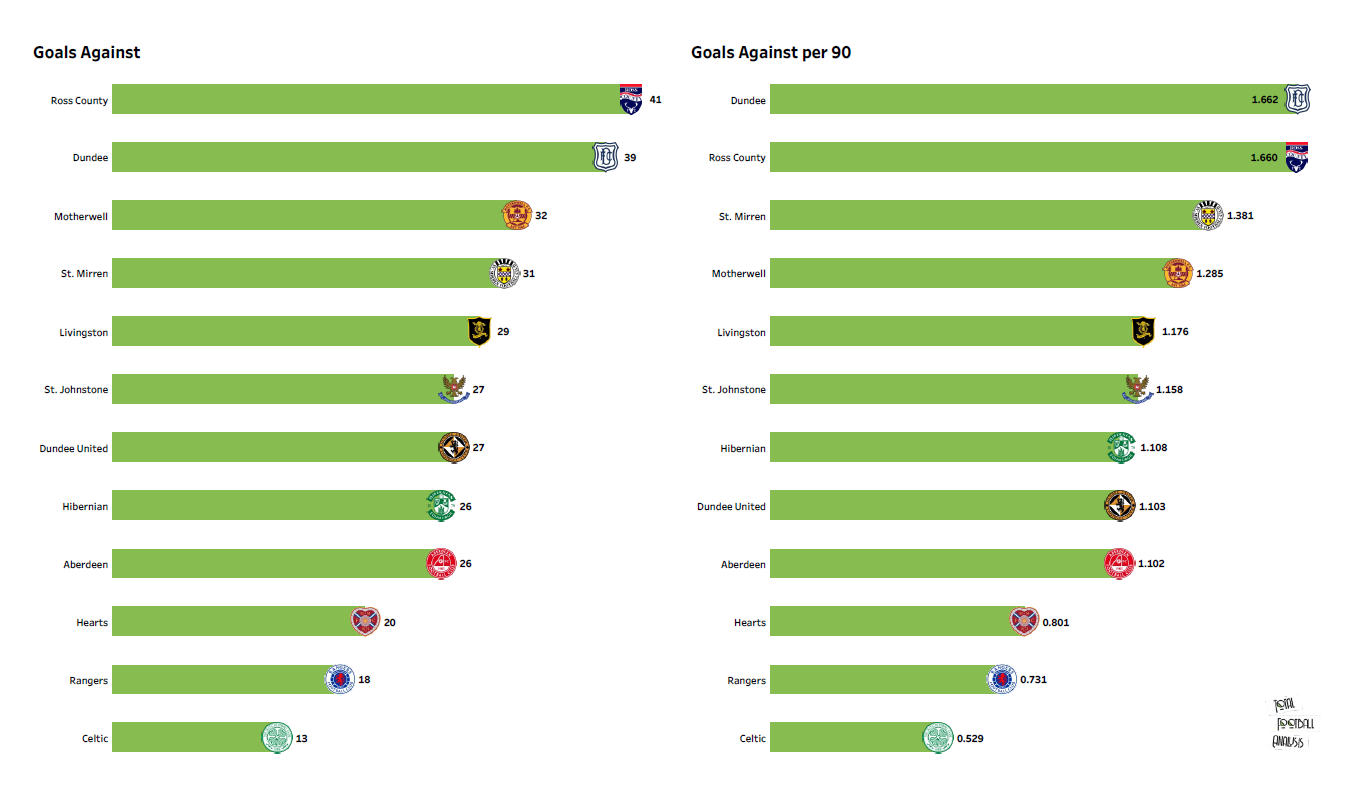 Robbie Nielson’s side arrive in this match in impressive form, although Hibernian do have the capability to even things. A draw is a likely scenario.