Hibernian are set to take on St. Johnstone on Saturday in the Scottish Premiership. The home side will be hoping to move to fourth place while the visitors are placed in the relegation zone. Can Hibernian claim three points against the Saints?

After two back-to-back goalless draws, Hibernian would be looking to improve their attacking output. With two goals scored in six previous matches in the league, the Hibs are facing trouble finding the back of the net. In their previous match against Dundee, Hibernian were down to 10 men in the 58th minute, as Rocky Bushiri was shown a red card. Despite being down a man, the Hibs managed to hold-off Dundee and pick up one point. As a result of the draw, Hibernian have dropped down to the fifth spot in the league with nine wins, nine draws, and 11 losses in 29 matches. A win against the Saints will put Hibernian back to the fourth spot, depending on other results. The Hibs’ home form has been strong this season, and they would be looking to capitalize on that form. Rocky Bushiri is suspended for the match and will miss out. Kevin Nisbet will remain sidelined for the remainder of the season after an injury last weekend. Christian Doidge will lead the line for the Hibs against the Saints. 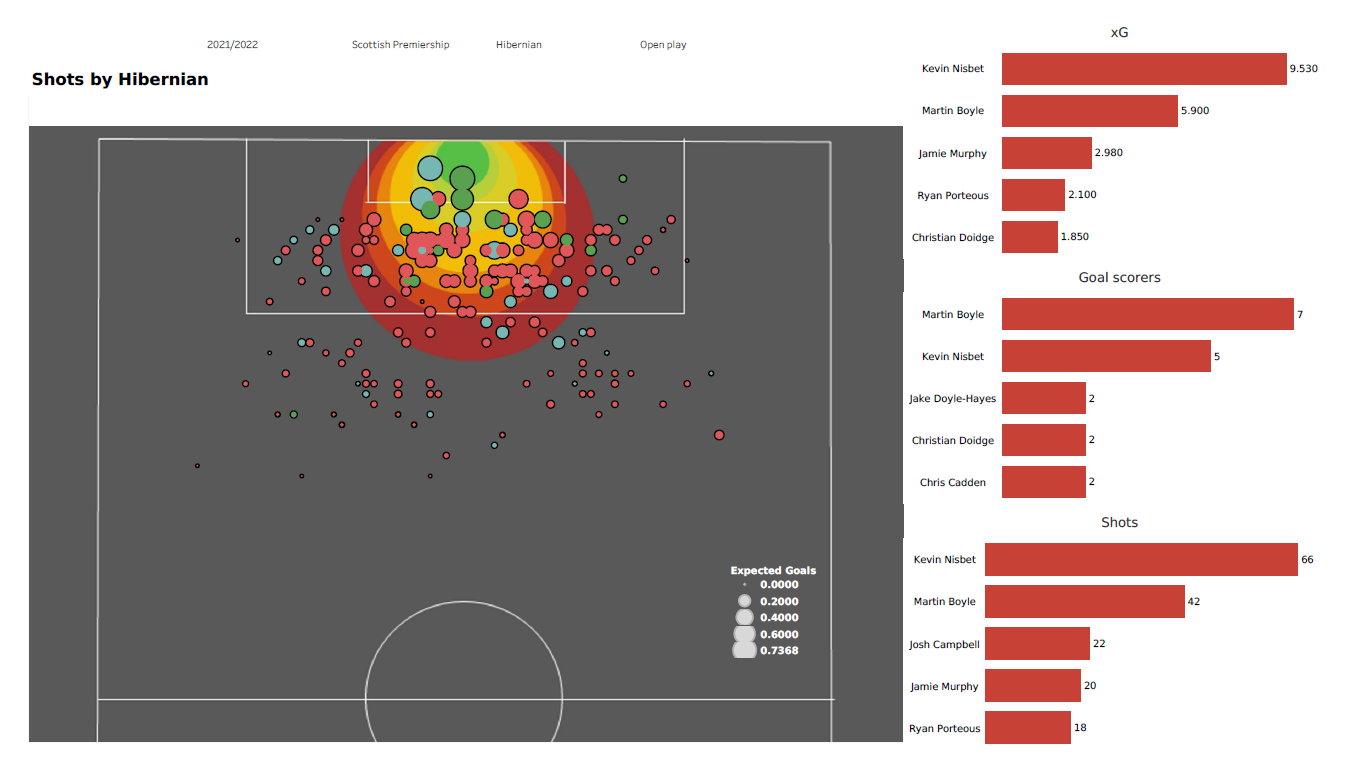 In the above viz., we can see the locations of all the shots taken by Hibernian this season in the league. Kevin Nisbet leads the xG chart for his side, followed by Martin Boyle. Boyle, however, is the current top-scorer for the Hibs in the league with seven goals, which means he has outperformed his xG. Kevin Nisbet has taken the most shots for the Hibs. 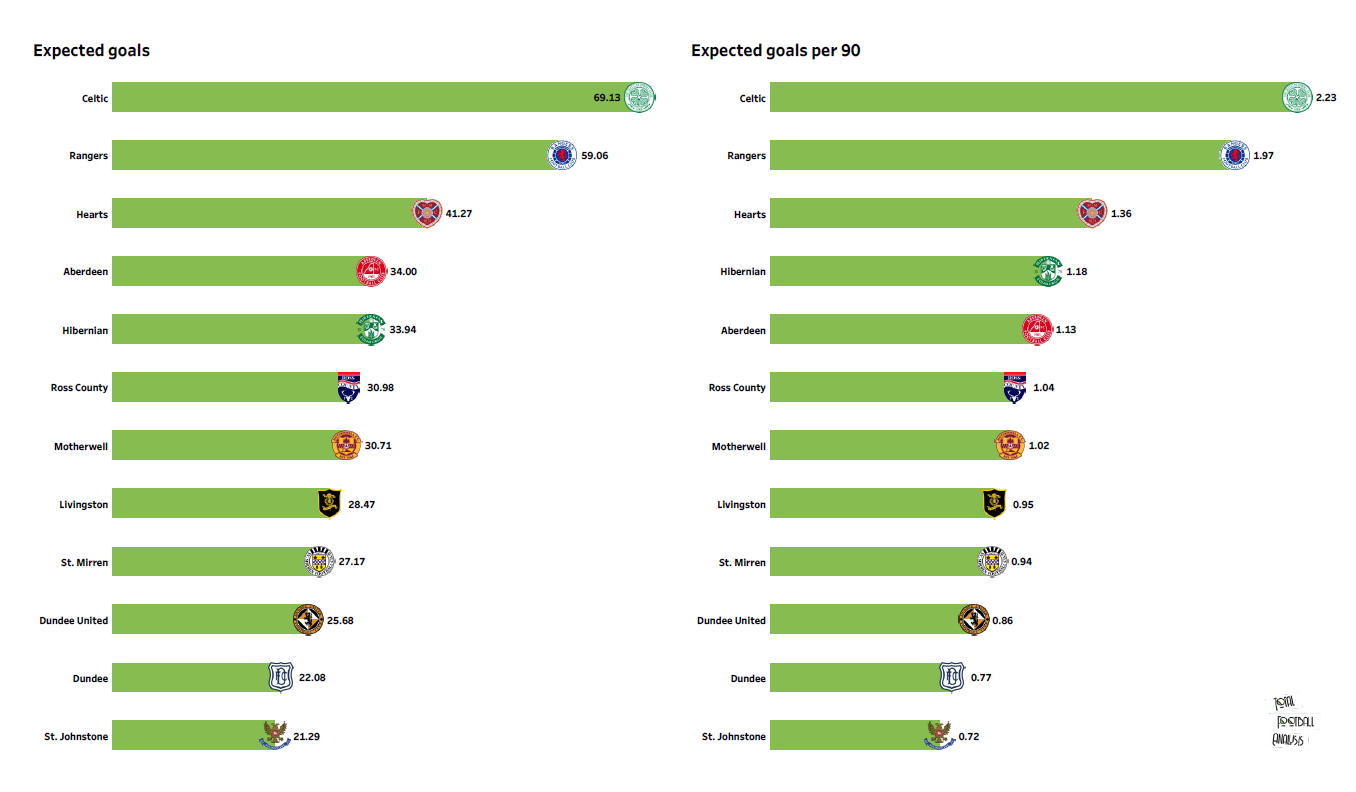 Despite their scoring difficulties in recent matches, Hibernian have created decent goal-scoring opportunities this season. They are placed at the fifth spot in terms of xG, averaging an xG of 1.18 per match.

With two losses in a row, the Saints are still in the relegation zone. Glen Kamara’s goal in the third minute proved sufficient for Rangers to take a narrow win against St. Johnstone. As a result, they are placed at the 11th spot in the league with five wins, eight draws, and 16 losses in 29 matches. The Saints would need a decent string of wins if they are to narrow the gap with tenth-placed Aberdeen and move closer to the safety zone. Their trouble in finding the back of the net has been a cause for concern. The Saints have scored the fewest goals in the league. Callum Hendry could lead the attacking line in the upcoming match. 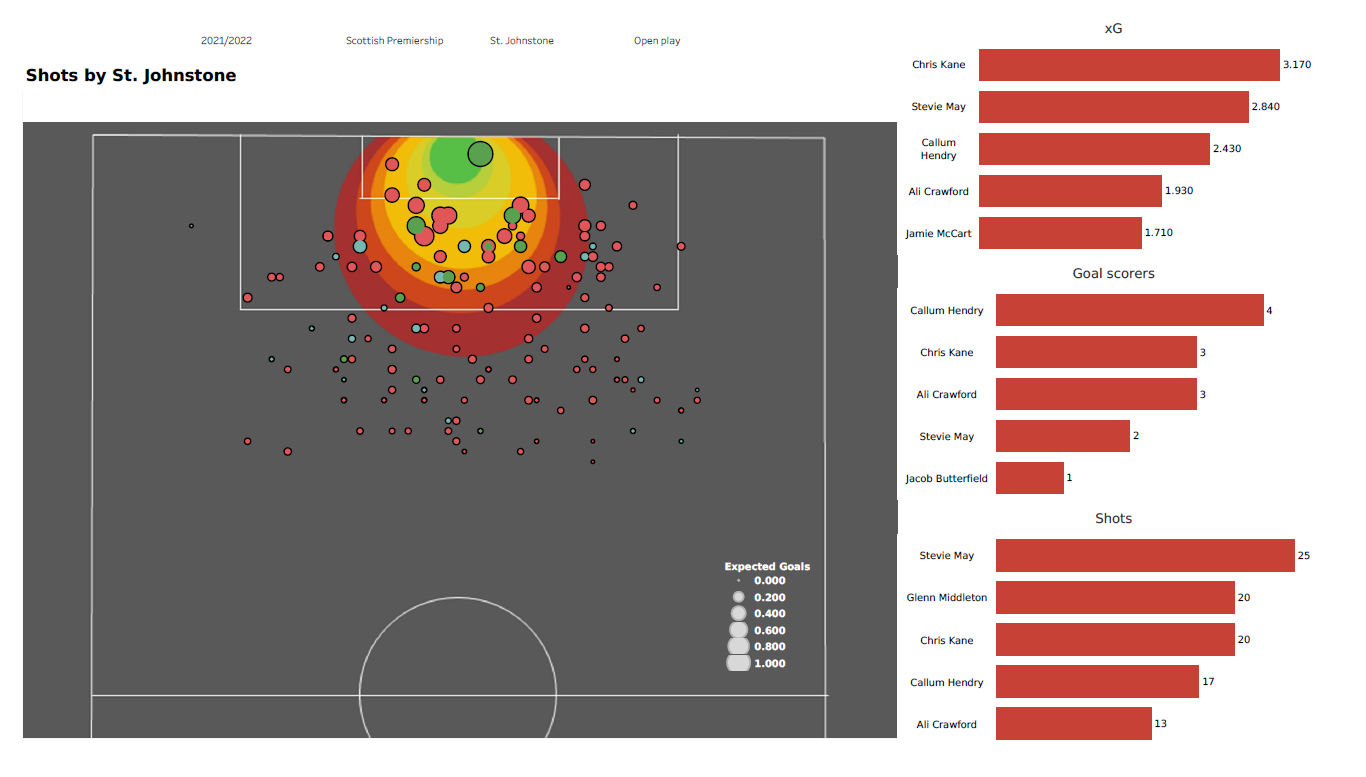 The above viz. highlights the locations of the shots taken by the Saints this season in the league. Chris Kane leads the xG chart, followed by Stevie May. Callum Hendry is currently the Saints’ top-scorer in the league with four goals. Stevie May has taken the most shots for his side. 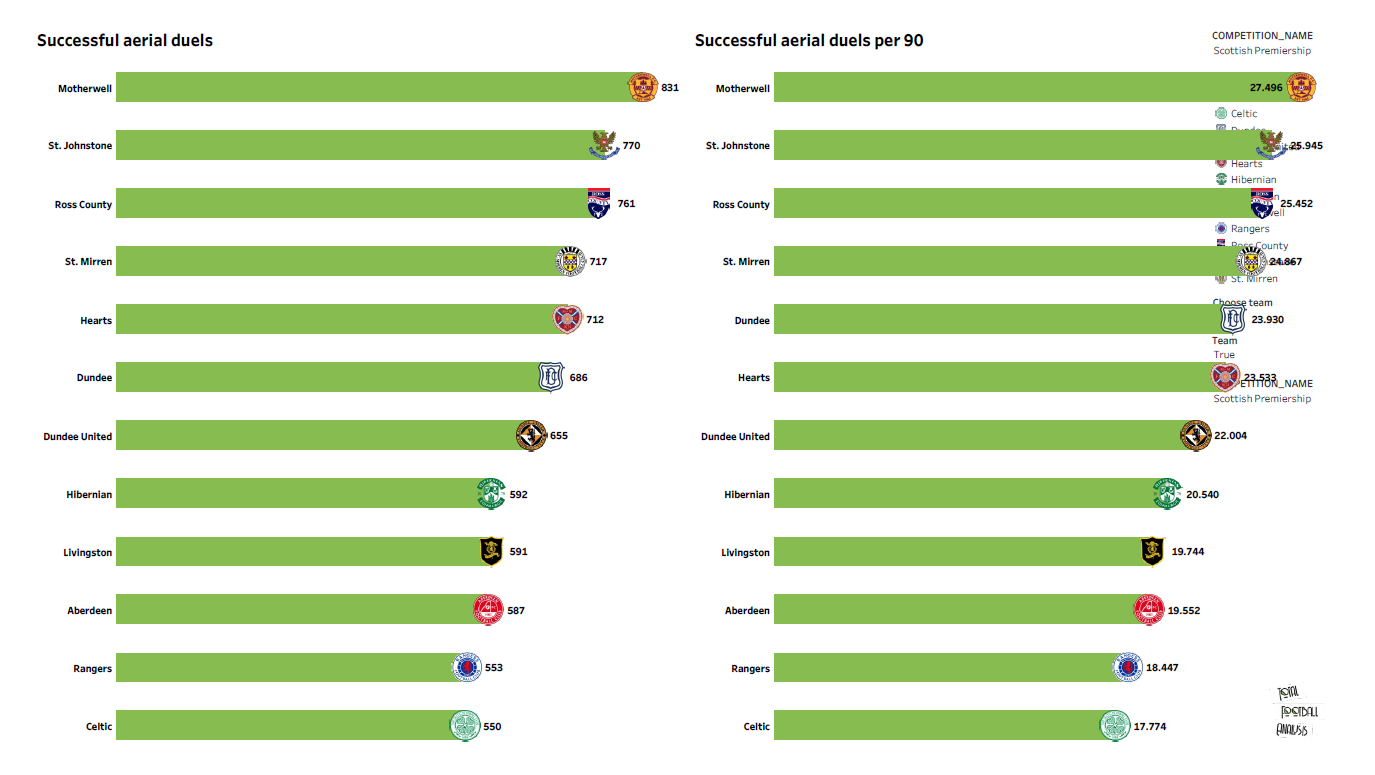 St. Johnstone have won the second-highest number of aerial duels in the league. They average 25.945 successful aerial duels per match.

Both teams are suffering in front of the goal this season. The Saints will make it tough for Hibernian, however, the Hibs should take a narrow victory.