Motherwell and Livingston look to earn their third win of the season in the Scottish Premiership when they go head-to-head at Fir Stadium. Both teams sit fourth and fifth in the league table, respectively, and aim for a top-half finish this season.

Motherwell returned to winning ways after a thrilling 3-2 victory over Aberdeen. They made a comeback in the second half to take three points from the game. Motherwell have scored five goals this season with an average xG rate of 1.71. The defence has leaked four goals, with two each in the last two games.

Livingston, on the other hand, started the season with a loss, but they won their last two matches to stay in the top half of the table. Livingston have scored four goals with an average xG rate of 1.03. Their defence has leaked three goals, two of them in the first match.

Let us look at the three key points that are on the cards according to the stats.

The biggest struggle for these two teams this season is to keep hold of the ball. Motherwell averaged 46.36% ball possession in their three matches, and Livingston were even below them, as they averaged 32.32% ball possession. The main reason behind their ball retention struggles is a low passing accuracy rate. 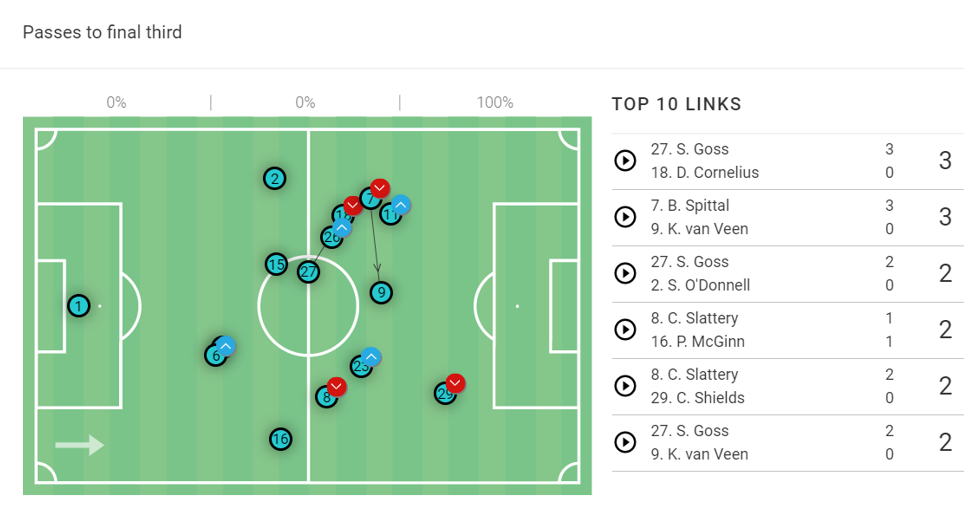 Motherwell average 359 passes per match with an accuracy rate of 76.4%. The biggest concern for the manager is his players’ poor decision-making in attempting forward passes. Motherwell average 143 forward passes per game with an accuracy rate of 65.5%. Adding to their passing struggles, they average 57.6% passing accuracy when attempting passes in the final third. This is a bit of a concern for the manager. The above viz shows the average position of the players and the passing links. We can observe that Motherwell created most of the plays from the left hand. They will once again try to trouble the opposition from that side. 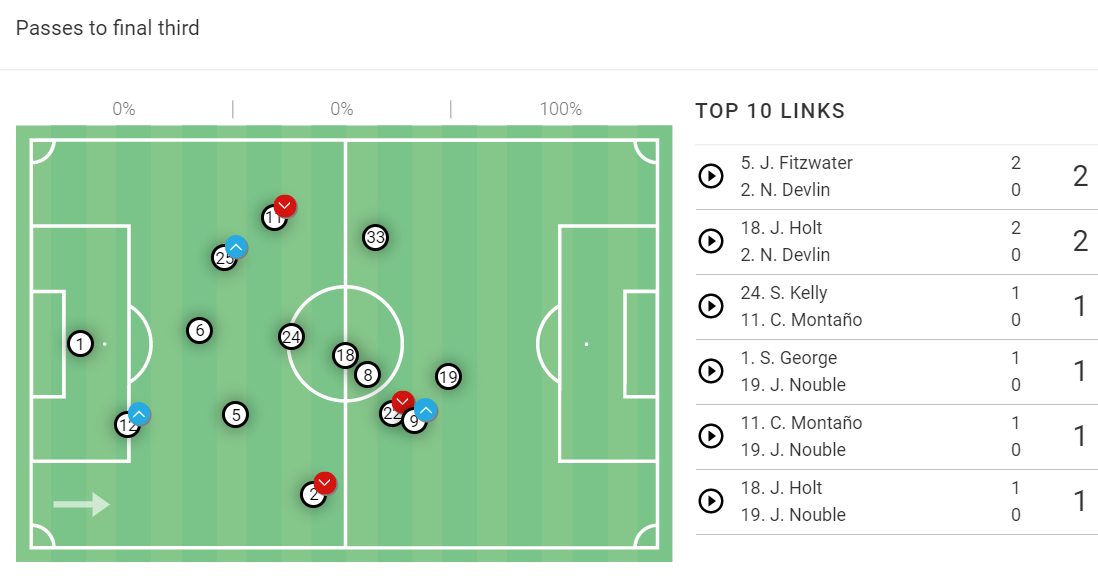 Livingston also have the same struggles on the pitch. They average 194.33 passes with a 78% passing accuracy rate. The visitors also struggle to make accurate forward passes. They have an average of 83.67 forward passes per 90 minutes, but the accuracy rate is low at 68.1%. The above viz shows that Livingston players play a more defensive line. Due to this, they only average 29.33 passes to the final third and have a low accuracy rate of 59%.

This is a concern for both the managers as their players struggle to find teammates in crucial areas. They will look to improve that in this match.

Motherwell on the attack 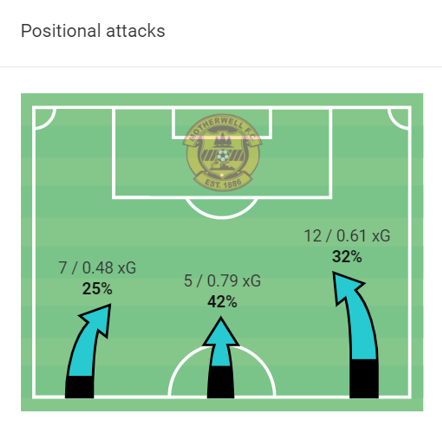 The match could feature a lot of aerial battles. The stats in the last few matches show that both teams have been good in the air and have won duels in crucial areas. 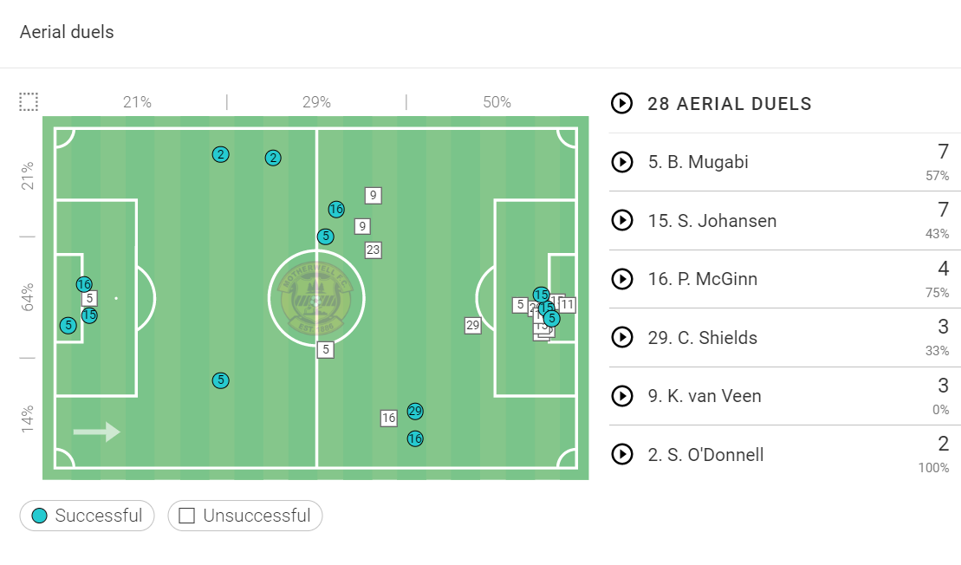 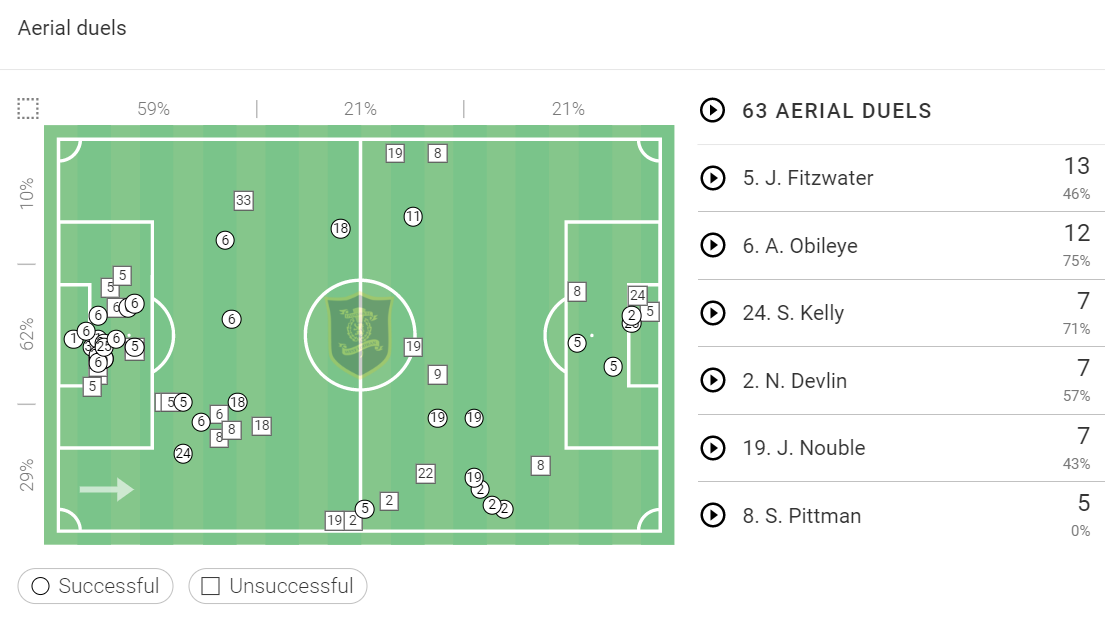 Livingston have been involved in 58 aerial battles and they have won 45% of those. In the last game, they contested 63 duels, with 59% of them coming inside the defensive third, especially inside the penalty box. Livingston had a huge win percentage inside the box, and they will look to stay on the front foot in the upcoming match.

Motherwell are likely to go with the same line-up after their impressive victory against Aberdeen. Ricki Lamie has served his suspension and he could straight away take over the centre-back role. Callum Slattery scored a goal on his first start, and he is likely to retain his place in the team.

Motherwell will have the home advantage as they look for back-to-back wins for the first time this season. They have created more chances than Livingston and pose a greater threat to the opposing goal. Livingston, on the other hand, have found their way to break the opposition’s defence. Despite having less possession of the ball, they have created chances for themselves and scored goals. Both teams will be up for a challenge and look to continue their good start to the Scottish Premiership season.