Kilmarnock marked their return to the Scottish Premiership with a 1-1 draw against Dundee United. The visitors scored a goal towards the end of the first half. Ian Harkes was sent off in the second half, and that opened the doors for the home team. However, they had to wait until injury and stoppage time to score an equalizer. Dylan Levitt scored his first goal for Dundee United since joining the club on a permanent deal in the summer. 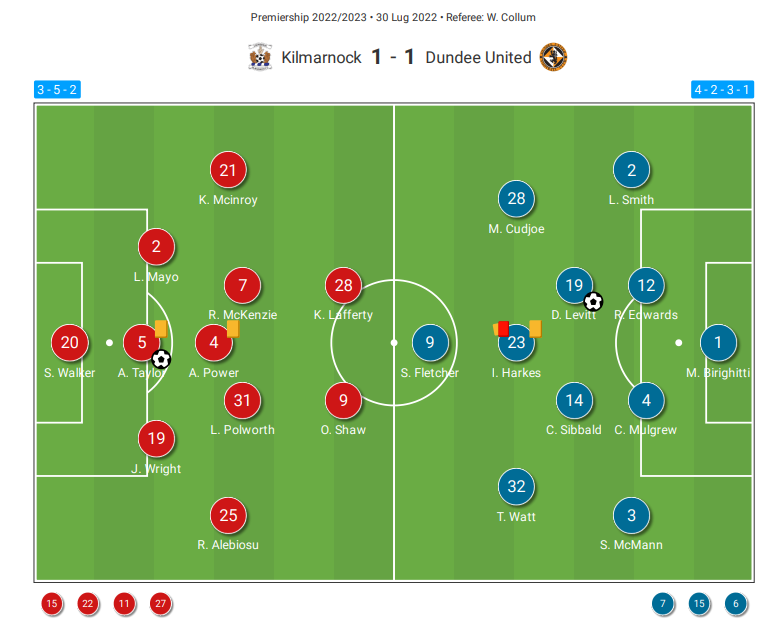 Kilmarnock started the match in a 3-5-2 formation with former Rangers striker Kyle Lafferty and new signing Oliver Shaw leading the line for the home team. Ashton Taylor, a former Aberdeen defender, was the goalscorer for Kilmarnock. Dundee United lined up in a 4-2-3-1 formation for this match. Steven Fletcher started the match on his return to the Scottish Premiership.

The above viz shows the formation of Kilmarnock at different time intervals. They played in the 3-5-2 formation for the first 60 minutes of the match. The team then took a more attacking approach and changed the formation to 3-4-2-1 for the next 20-minutes. The last ten minutes and injury time saw the team lining up in a 4-2-2-2 formation. Kilmarnock had 55.99% of the ball possession. The home team attempted 376 passes with an accuracy rate of 79.93%. 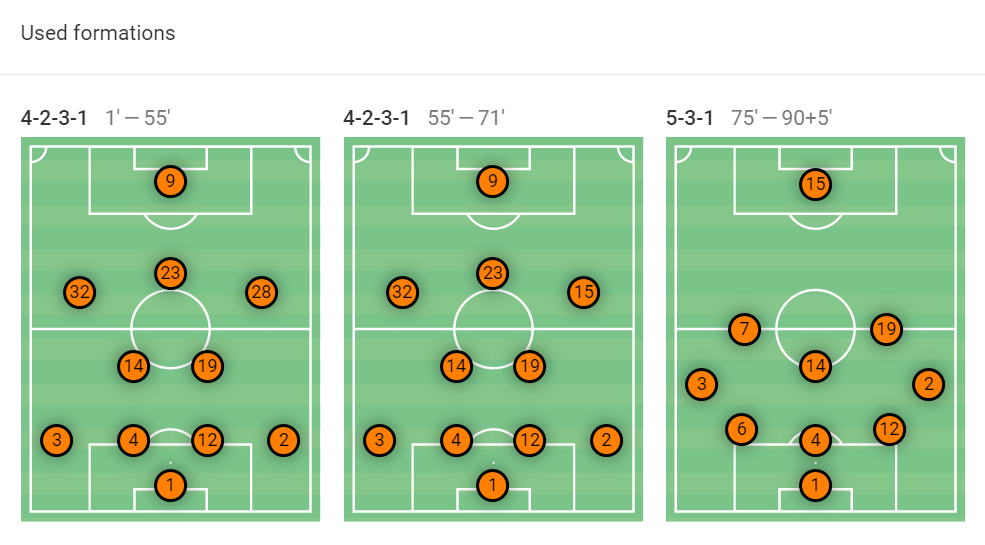 Dundee United played in the same formation for the first 71 minutes of the match. The manager decided to defend the lead after getting down to ten men in the 72nd minute. He changed the formation to 5-3-1, and former Rangers forward Glenn Middleton remained the lone striker at the top. Dundee United had 44.01% ball possession; they attempted 333 passes with a 73.27% passing accuracy rate.

The home team attempted 17 shots; six were on target with an xG rate of 1.59. The above viz shows all the shot-ending locations. The goal was scored from the left of the keeper. Five shots were blocked by Dundee United players, and one of the shots even hit the crossbar.

Dundee United players attempted seven shots, and five were on target. The shot map shows that all the shots on target were straight on goal. The visitor’s xG rate in the match was 0.62. 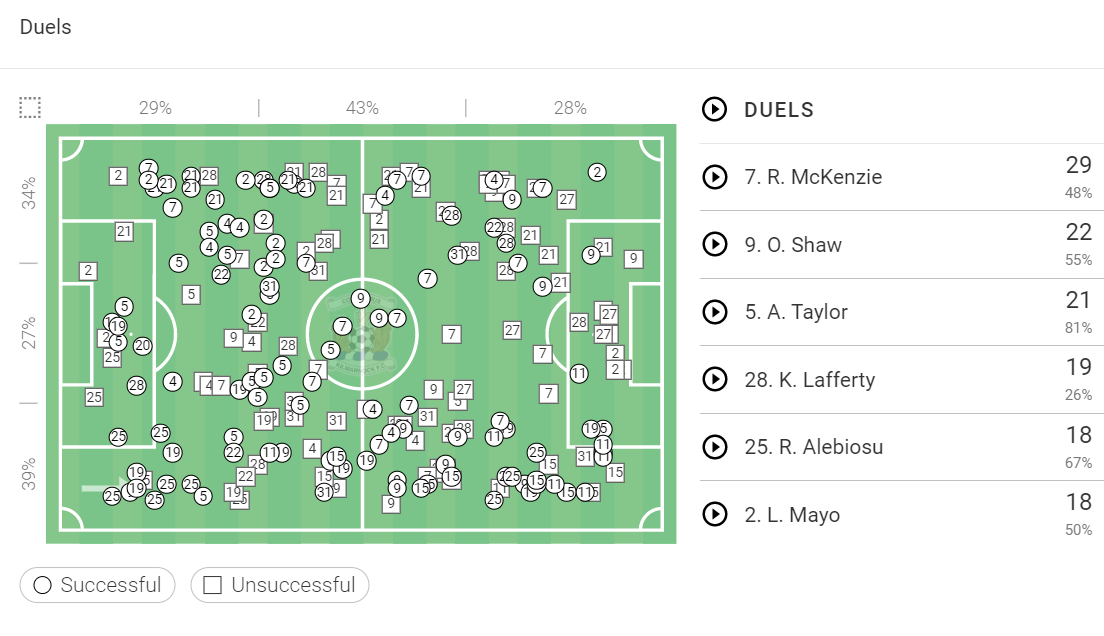 The above viz shows all the duels that were contested by the home team. It can be observed that most of the traffic was on the right side. Rory McKenzie contested the most duels for Kilmarnock. The home team failed to win most of their duels inside the opposition’s penalty box and also lost a few inside their half. The manager will look to improve this for the next game. Overall, the team contested 245 duels with a 52.65% success rate. 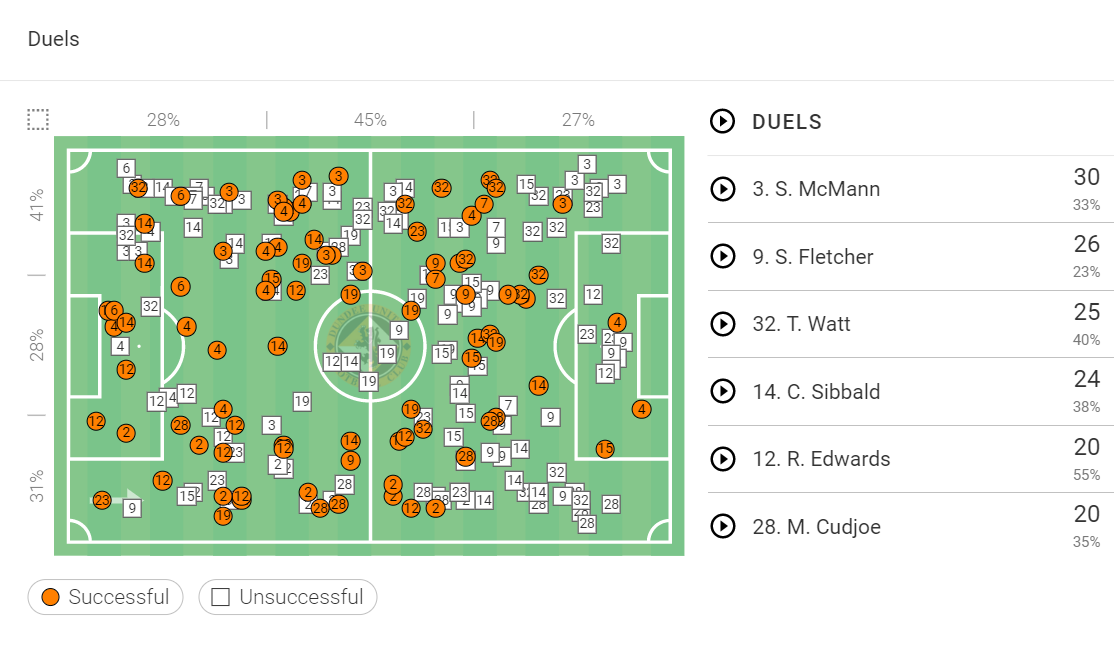 The visitors had to defend against the attacking wave from the left side. They had a low win percentage of 41.22%. Dundee United players lost most of their duels inside the attacking third. Left-back Scott McMann contested 30 duels but only won ten. 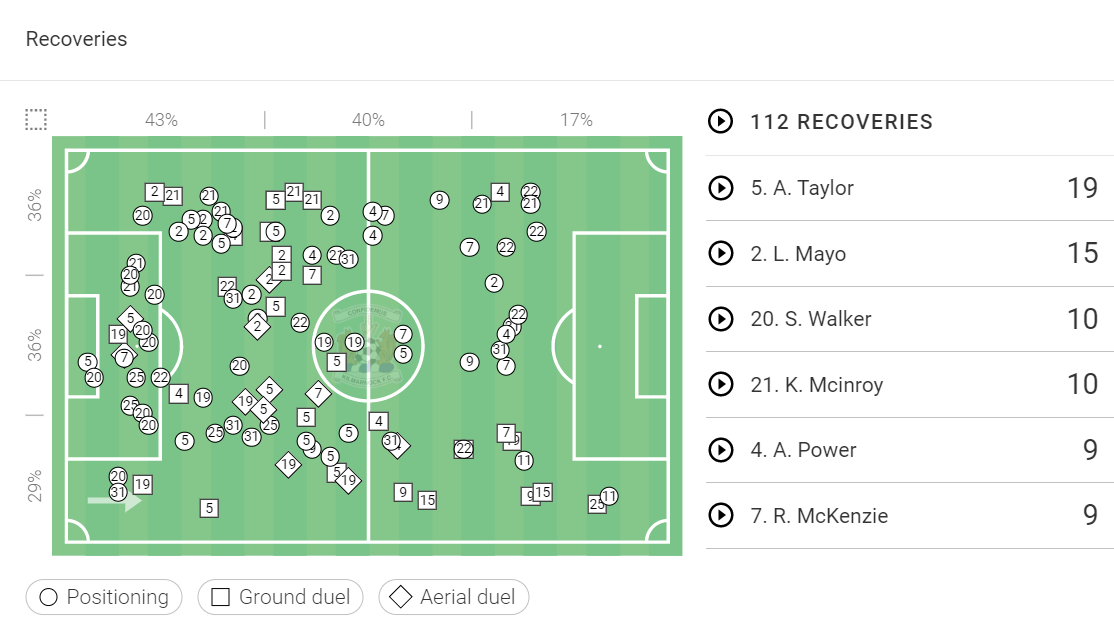 Kilmarnock players made a lot of recoveries in the middle and defensive third. They made 112 recoveries in all, with 47 and 42 made inside the defensive and middle third, respectively. Ashton Taylor made the most recoveries for the home team. 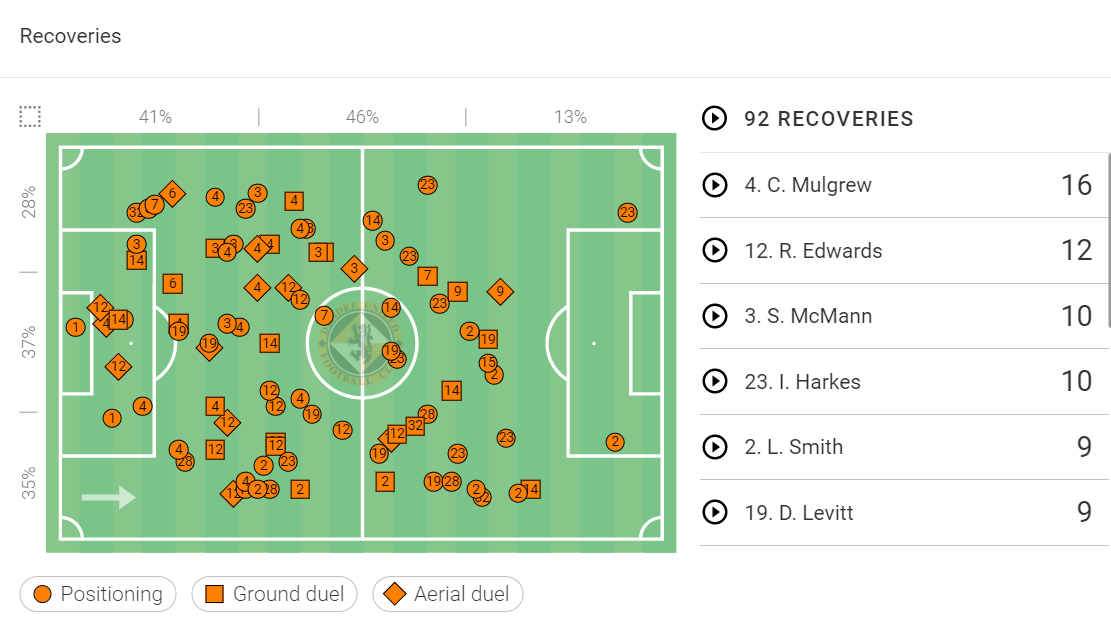 Dundee United made 92 recoveries, and 44 were made in the middle third. Most of the recoveries were made on the right, with defender Charlie Mulgrew making the most recoveries.

Kilmarnock created a lot of chances against Dundee United and earned a point in their opening game. The manager will expect his team to be more clinical with their finishing and score more goals in the next match. Dundee United had a decent outing, but they failed to come out with three points. The manager will be disappointed and make some necessary changes to improve the attack.