St. Johnstone will host Dundee on Wednesday in the Scottish Premiership. Both teams are placed at the bottom of the league table and would be aiming for a win to avoid their chances of relegation. Can St. Johnstone come out on top at home?

With only three wins, St. Johnstone have been struggling to perform this season. They are placed at the bottom of the table and are under pressure to improve their form. A win against Dundee will put them in the 11th spot in the league, but they would still be four points away from the safe zone. The Saints have been winless in their previous 10 games in the league and were recently knocked out of the Scottish Cup. They started the new year with a defeat against Hearts. Josh Ginnelly scored twice to hand Callum Davidson’s side their eighth straight loss. Davidson admitted post-match that his side is in “crisis”. He added that they would need to get results, otherwise they would be in a difficult situation. Shaun Rooney and Craig Bryson are set to remain out for the match against Dundee, while David Wotherspoon is out for the remainder of the season. Liam Craig and Stevie May should be back in the squad as they were rested in their side’s Scottish Cup defeat. 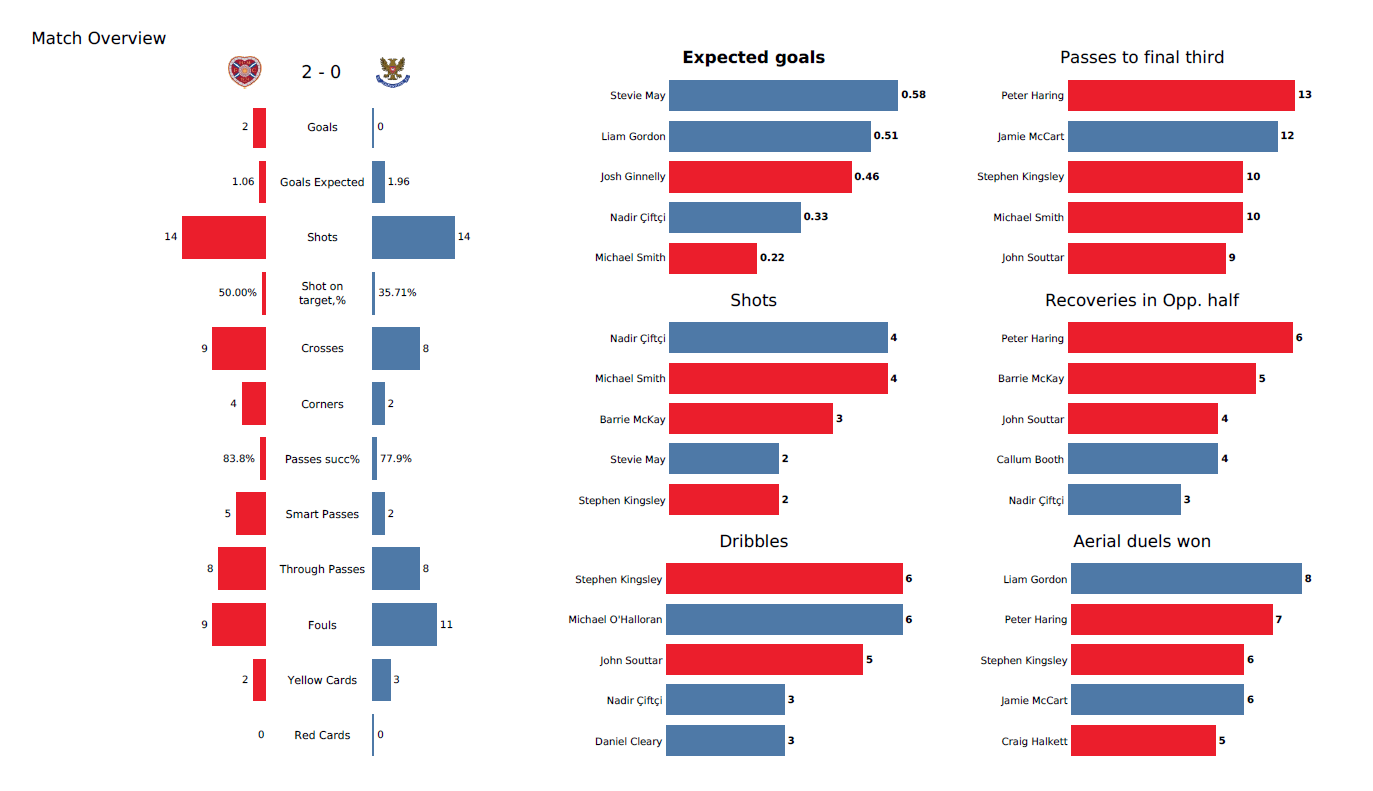 In their previous game against Hearts, St. Johnstone were defeated despite having a better xG than their opponents. The Saints’ xG of 1.96 surpassed that of Hearts’ 1.06. Both teams took an equal number of shots, but Hearts were more accurate in their shooting, as indicated by their 50% shot accuracy. Stevie May had the highest xG, followed by Liam Gordon. The latter also won the highest number of aerial duels. 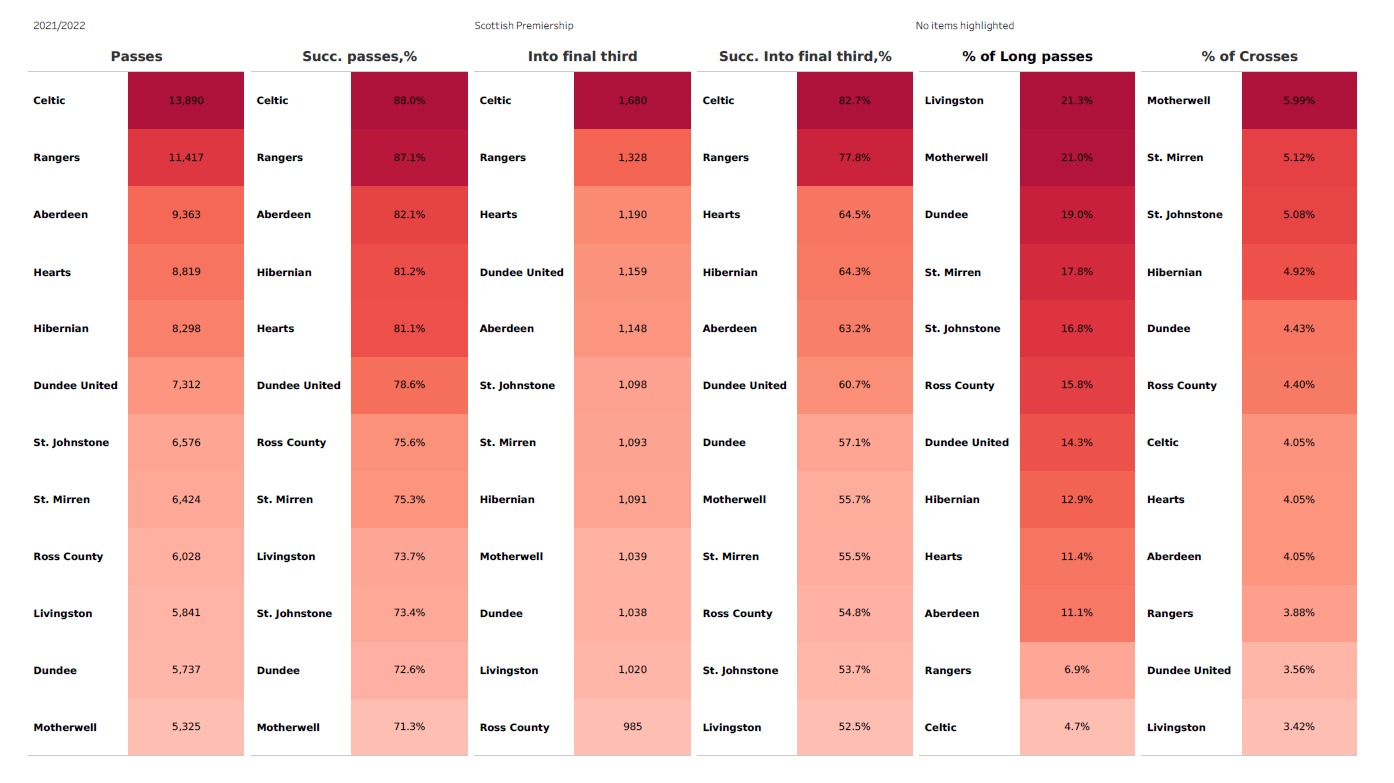 In the above viz., we can see how St. Johnstone have performed in terms of passing metrics compared to other teams in the league. The Saints are placed at a decent sixth spot in terms of passes into the final third and fifth in terms of the number of long passes.

Similar to their opponents in the upcoming match, Dundee have also been struggling to perform in the league. They are placed at the 11th spot with four wins, four draws, and 13 losses in 21 games. A win against the Saints would put them closer to the 10th placed Ross County, however, they would still be two points behind the safety zone. Dundee would be looking to build upon their victory in the Scottish Cup and improve their chances of survival. The Dark Blues started the new year with an away defeat against Livingston. Bruce Anderson scored twice in the second half to hand his side the advantage, as Livingston took three points at home. Cillian Sheridan and Lee Ashcroft are side-lined for the match against St. Johnstone. 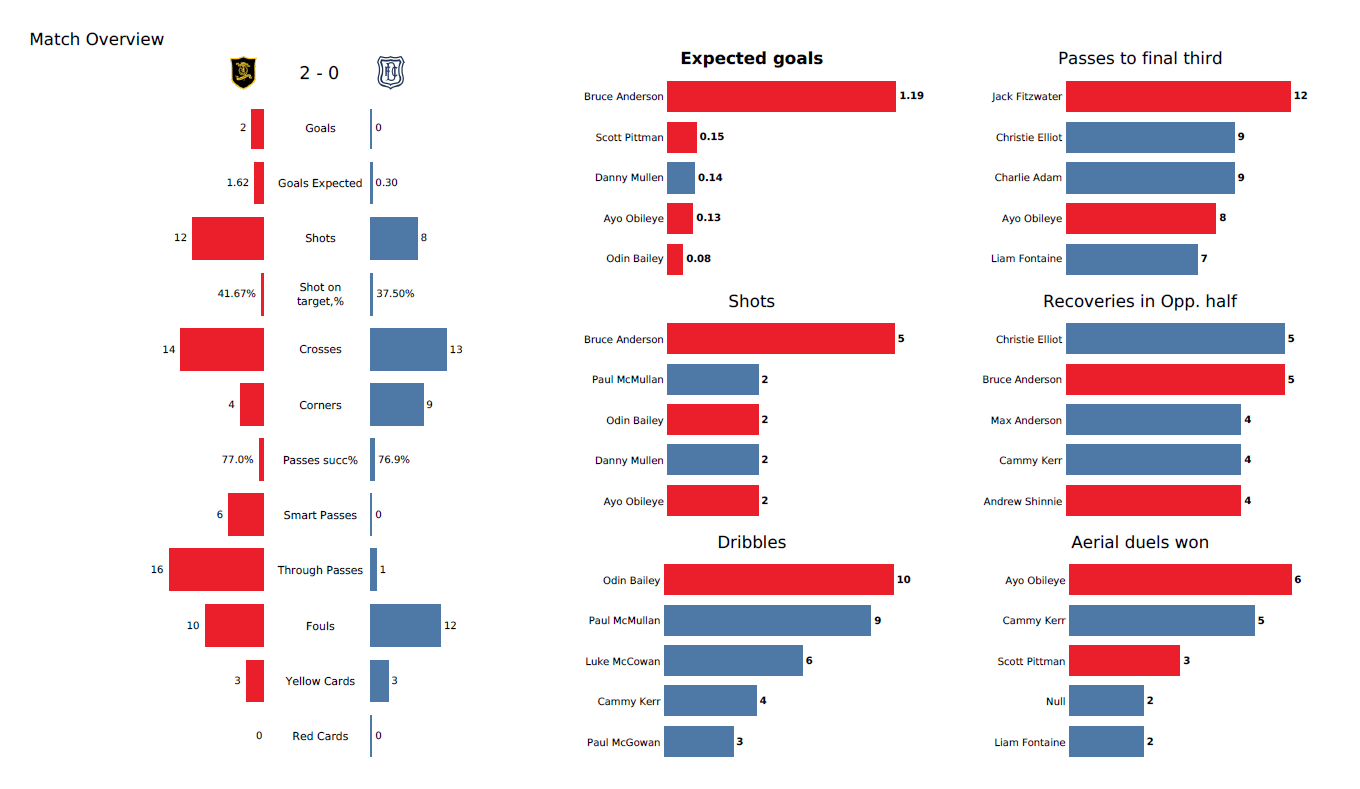 In their previous game against Livingston, Dundee were dominated in terms of multiple attacking metrics. Their xG of 0.30 was way below Livingstons’ 1.62, indicating a lack of quality goal-scoring opportunities. Bruce Anderson had the highest xG, while he also took the highest number of shots. 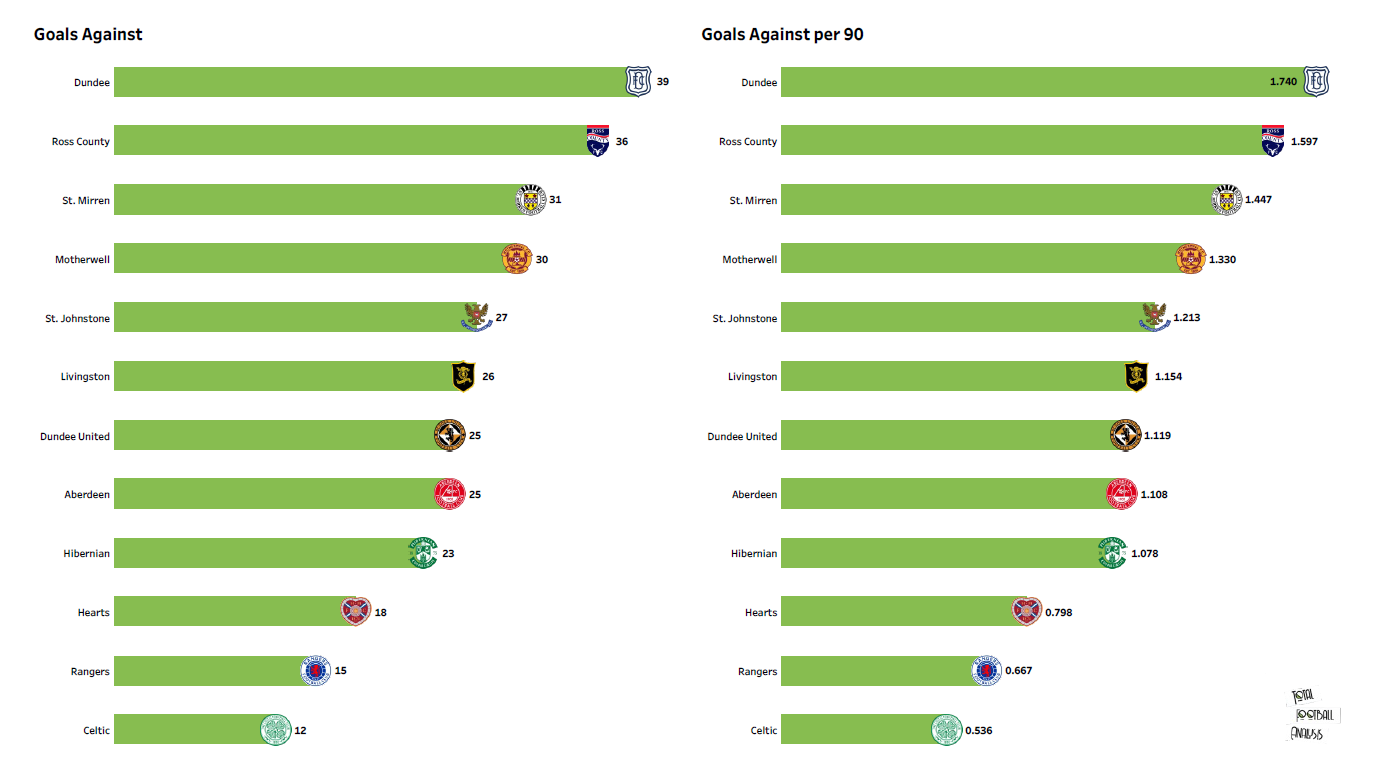 Dundee currently have the worst defensive record in the league. They have conceded 39 goals while conceding an average of 1.74 goals per match.

St. Johnstone have had trouble in finding the back of the net this season. The Dark Blues could edge out the game narrowly after securing a win in their recent Scottish Cup match.